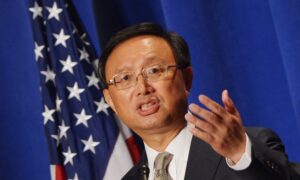 Chinese state-run media Xinhua published a series of four commentaries in which it called on the new U.S. administration to “lead the U.S.-China relationship back on track” after years of what one article called “casting poison” onto bilateral relations.

“Treating China as a major strategic competitor or even a rival is a historical, directional, and strategic error [that the U.S. made],” Xinhua wrote in its first commentary published on Feb. 4. “Now the [United States’] most urgent task is to correct itself to take the right path… It’s time for the U.S. to show political foresight and walk toward China.”

The commentary went on to criticize the United States for ruining the relationship in the past four years, making indirect swipes at the Trump administration.

“Some people were believing blindly in ‘America first,’ delusionally thinking that ‘decoupling’ and ‘disrupting supply chains’ could stop the globalization of the economy,” the Xinhua article stated.

Former president Donald Trump had suggested the idea of decoupling the Chinese and U.S. economies. His administration officials have also highlighted national security risks in relying on Chinese manufacturing and called for critical sectors to reshore.

The commentary did not mention or address the U.S. concerns.

A third commentary was published on Feb. 5, focused on U.S.-China trade relations.

Xinhua criticized that the Trump administration tried to decrease U.S. investment into China, encouraged American firms to leave China, and suppressed Chinese firms in the United States. The former two likely referred to the aftereffects of trade war tensions, as the United States enacted punitive tariffs to address China’s unfair trade practices and China responded with retaliatory tariffs. The former administration also placed a list of Chinese firms on a trade blacklist for national security risks or their roles in China’s human rights abuses.

But the article made no mention of the former administration’s rationale for the policies.

A fourth commentary was published on Feb. 6, focused on tech cooperation.

“The last U.S. government unreasonably suppressed and intensively shut out China’s science and technology with the excuse of national security. Those methods were disgusting and shocking,” the article stated. “Technological containment is akin to the crooked path of self-isolation.”

Many of the blacklisted Chinese companies were tech firms, effectively blocking them from doing business with American suppliers.

Blinken had said the United States would stand up for human rights and democratic values in Xinjiang, Tibet, and Hong Kong.

Xinhua’s recap of their phone call was in a markedly different tone.

“[Blinken said that] the U.S. was willing to develop a stable and constructive bilateral relations with China,” Xinhua reported.

China affairs commentator Yang Wei concluded that the recent commentaries and rhetoric from Chinese officials show that they “are trying to threaten Biden’s administration to kneel down and listen to them.”

“In fact, we have seen the result, which is that the U.S. government and Beijing couldn’t be in agreement on almost all issues,” Yang wrote in a commentary published on the Chinese-language Epoch Times on Feb. 7.

U.S.-based China affairs commentator Li Linyi analyzed that the Xinhua commentaries were a display of what the Chinese regime hopes the Biden administration would change about the relationship.

“The Chinese regime is laying its cards on the table,” Li said in a phone interview, and testing whether the new administration would fulfill its requests.

During an interview with CBS’s “Face the Nation” that was broadcast on Feb. 7, President Joe Biden said, “there’s going to be extreme competition [between the U.S. and China],” but that the new relationship he wants to forge need not be one of conflict.

French President Emmanuel Macron similarly said during an event held by Washington-based think tank Atlantic Council on Feb. 5: “China is altogether a partner, a competitor, and a systemic rival.”

Macron explained that China was a partner on climate change, a competitor on trade, and a rival given its geopolitical ambitions and human rights abuses.