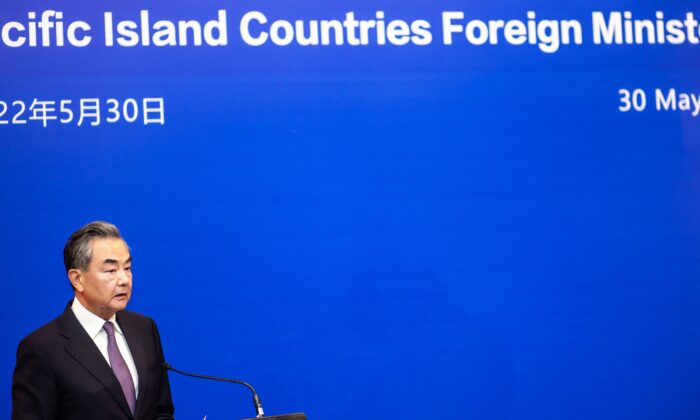 A lack of consensus from Pacific nations has forced Beijing to shelve a sweeping security and economic deal with the region, following a meeting between foreign ministers on May 30.

Chinese Foreign Minister Wang Yi is midway through an eight-nation tour of the region where Beijing has been attempting to tighten alliances with the island nations.

The China-Pacific Island Countries Common Development Vision, which was leaked last week, covers cooperation across 10 Pacific nations in the fields of free trade, fisheries, security, cyber, and maritime mapping and would have been a significant step forward for the Chinese Communist Party’s ambitions in the region.

However, Wang and Fijian Prime Minister Frank Bainimarama later confirmed at a press conference that the deal had been shelved following a lack of consensus.

Going forward, Beijing said it would “release its own position paper” on cooperation with Pacific islands. Wang also pledged “in-depth discussions and consultations to shape more consensus” on cooperation.

The Fijian prime minister reiterated a “consensus first” approach to regional agreements in the area. While Beijing’s ambassador to Fiji said afterward that there had been “general support” for the agreement, according to The Guardian.

However, David Panuelo, president of the Federated States of Micronesia, has been vocal in his opposition to the regional deal, writing to 21 Pacific leaders saying the pact could trigger a new “Cold War” between Beijing and democratic nations.

He said the deal could draw Pacific nations “very close into Beijing’s orbit, intrinsically tying the whole of our economies and societies to them.”

“The practical impacts, however, of Chinese control over our communications infrastructure, our ocean territory and the resources within them, and our security space, aside from impacts on our sovereignty, is that it increases the chances of China getting into conflict with Australia, Japan, the United States, and New Zealand,” he said.

Australian and U.S. leaders have taken steps to counteract Beijing’s push into the region, including launching the Indo-Pacific Economic Framework for Prosperity to bolster trade and economic exchange between nations.

While the major regional deal didn’t go ahead, the Chinese foreign minister still managed to gain further commitments from the governments of the Solomon Islands, Kiribati, Samoa, Fiji, and Tonga to tighten cooperation.

On May 26, Wang and the Solomon Islands foreign minister said in a statement that all agreements signed between the governments had been “effectively implemented,” while pledging to work together on Belt and Road Initiative projects, agriculture, fisheries, and other areas.

Solomon Islands Prime Minister Manasseh Sogavare has been criticised for signing a security deal with the Chinese Communist Party that could pave the way for Beijing to station troops, weapons, and naval ships in the region—opening the door for the eventual militarization of the South Pacific.

The island of Guadalcanal was the site of extensive fighting during World War II between Allied Forces and Imperial Japan because of its strategic position and influence over surrounding sea lanes.

On May 27, Wang met with Kiribati Vice President Teuea Toatu and managed to secure a commitment to deepen ties. Kiribati’s ambassador to China, David Teaabo, said the leaders were to sign up to 10 memoranda of understanding, according to Chinese state-owned media Global Times.

Concerns have been raised that Beijing could fund and upgrade a World War II-era airstrip in Kiribati that could also be another strategic foothold for Beijing.

On May 28, Samoan Prime Minister Fiame Naomi Mata’afa committed to deepening cooperation in areas such as infrastructure development, pandemic response, climate change, and education. Upon her accession, Mata’afa had cancelled a $100 million Belt and Road Initiative deal in the country’s capital, Apia, yet the prime minister was keen to continue building ties with Beijing.