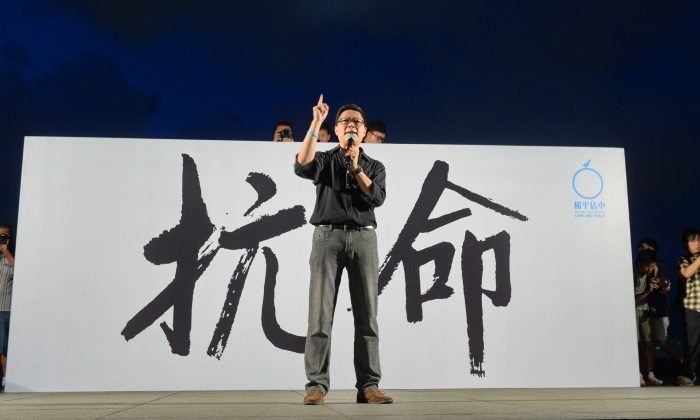 Chan Kin-man, a founder of the Occupy Central movement, speaks at a rally in Tamar Park, Hong Kong, on Aug. 31. Thousands gathered in protest of a recent decision by Beijing to continue restricting democracy in the city-state. (Sung Cheung-lung/Epoch Times)
China

Thousands took to the streets and public parks in Hong Kong on Aug. 31, in anger and in tears, protesting a recent decision by Chinese communist authorities to deny the city-state genuine democracy.

The decision was technically made by the Standing Committee of the National People’s Congress, a faux-legislature, though matters of such political weight are almost certainly decided at the top of the Party hierarchy.

The turgid, bureaucratic prose in the decision made one thing clear: Hong Kong’s demands for real democracy were not going anywhere.

The bone of contention between people in Hong Kong and the political needs of the Chinese Communist Party relates to the manner of selection of candidates that can be voted on for Hong Kong’s highest office, the chief executive.

Many in Hong Kong want to select the candidates themselves—like in any real democratic process.

Specifically, “the principle that the Chief Executive has to be a person who loves the country and loves Hong Kong must be upheld,” according to Beijing’s recent decision. “This is a basic requirement of the policy of ‘one country, two systems.'”

The slogan refers to the relationship between the People’s Republic of China, a communist dictatorship, and the Hong Kong Special Administrative Region, which is part of the PRC but governed differently. This was decided in 1997 when the United Kingdom handed the British colony back to Chinese rulers—though that framework came with the stipulation that universal suffrage would eventually be implemented.

In the recent decision, “universal suffrage” is redefined to mean that Beijing chooses the candidates.

There was much hope in Hong Kong that the decision, supposedly reached over several days of deliberation in Beijing, would concede to the demands laid out by civic groups in Hong Kong, and allow the people to choose their own candidates.

Those hopes now dashed, tens of thousands of Hong Kong residents are likely to begin ramping up their peaceful civil disobedience, according to promises previously made by the most developed of these groups, Occupy Central With Love and Peace, which proposes to flood Hong Kong’s financial district with protesters.

They have already filled Tamar Park on Sunday evening, where speeches were given and music performed, and plans made for further protest action.

Chan Kin-man, an initiator of the Occupy Central movement and a university professor, said that the decision was “absurd,” and if accepted by Hong Kong would be the beginning of the city-state’s decline.

In a speech, Chin said that 30 years ago he was a student fighting for democracy in Hong Kong—and now, 30 years on, he’s watching other students do the same. “We feel so hurt. These 30 years we’ve depleted the spirit and efforts of so many young people fighting for a democratic system in Hong Kong.”

Ronny Tong Ka-wah, a pro-democratic member of Hong Kong’s legislature, said “this is the darkest day in the development of Hong Kong’s democracy,” according to the Oriental Daily, published in Hong Kong.

The decision is “a breach of trust and a betrayal,” said Alan Leong Kah-kit, another member of the Legislative Council and a leader of the pro-democracy Civic Party, in an interview with Radio Television Hong Kong. It broke the Basic Law, Hong Kong’s constitution, and decisions previously made by the National People’s Congress, he said.

Leong said that the Chinese authorities had “fooled Hong Kong for so many years, now finally the mask is off,” according to RTHK.

Pro-democracy protesters at an event in Causeway Bay on Sunday said that, beginning on Monday morning, as many people as possible should flood into Hong Kong Central, the financial district, and “walk around.”

This form of protest proposes to circulate through the area rather than occupy it, a perhaps less confrontational approach.

Tam Tak Chi, a protest leader, suggested in an interview that car drivers could also do their part: by driving a bit slower than usual, not driving through yellow lights, and perhaps stopping on the side of the road from time to time: “If you feel that your tire doesn’t have enough air, you can get out and inspect it. This is completely legal.”