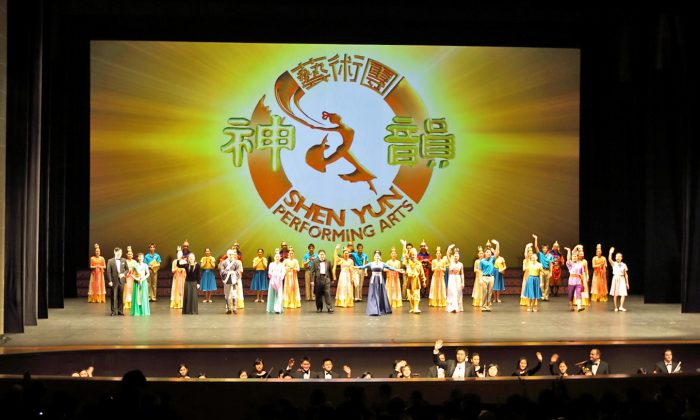 GWACHEON, South Korea—“Shen Yun is not like other performances that audiences soon forget after watching them. After seeing Shen Yun, I feel very tranquil and peaceful. I think the feeling will last. I feel positive energy [conveyed from Shen Yun],” said Ms. Zhang, who was graduated from the Department of Dance in Beijing Dance Academy, after seeing Shen Yun performance at Gwacheon, South Korea in the afternoon of Feb. 12.

New York-based Shen Yun Performing Arts was established in 2006 by a number of dancers and musicians, with the mission to revive the 5,000 years of divinely inspired Chinese culture. Illustrating ancient myths, historical legends and contemporary stories on the stage, Shen Yun ushers audiences into a world transcending time and space to experience cultural wonders.

Ms. Zhang came especially to South Korea from China to see Shen Yun. After the show, she and her friends lingered in the hall to share their reactions to seeing Shen Yun.

She said that when watching the introduction of the Shen Yun trailer, she was almost moved into tears, but after seeing the performance, she felt especially peaceful and comfortable. “I’ve never watched such a show performed with classical Chinese dance in China, so I felt quite stunned. However, after the show, my entire heart is particularly tranquil.”

She said, “I can still visualize those little monks there now. Their expressions were from their hearts.”

She admired that the dancers with superb skills were so innocent and pure. She especially liked the female lead dancer, “because from the performance and the mental state she conveyed, she is really like a divine maiden. She was very peaceful and it’s contagious. Other [dancers] were also very good.”

She explained that as an experienced dancer, she knows it is very difficult to maintain such a state of ease on the stage at all times, especially facial expressions. However, Shen Yun dancers are entirely different. They always look peaceful.

“Most dancers’ expressions turn stiff when they do a difficult movement. But she [Shen Yun lead dancer] kept being in a state of tranquility. I feel she’s just like a divine maiden. I especially wanted to follow her.”

She said that she wanted to dance with Shen Yun dancers. “The entire performance is beyond the term good. I can’t find the right word to describe it. But I can feel it with my heart. I can sense it. What I can say is only it’s really, superbly, excellent.”

After seeing Shen Yun, she has new inspiration for life, “I feel that everyone can be an artist. As long as people can live with a peaceful mind and without so many distracting thoughts, they can all be artists. If you are such an artist, many people will definitely appreciate you.”

She felt deeply sorry that Shen Yun cannot perform in China. “I heard that Shen Yun will perform in Taiwan. I really hope that the Chinese people in the artistic field can go seeing Shen Yun,” said Ms Zhang.

“This is my very first time to see the performance of the authentic traditional Chinese culture.”

“In the past, I didn’t have the opportunity to see a performance of Chinese dance. Not only is Shen Yun’s choreography excellent, but the performers’ movements and the visual effects are really great.”

Deeply moved by the program, Mr. Song expressed, “Among others, I was especially impressed with the scene of the deities descending from heaven in a group to create the civilization on earth in the first program, Grand Descent of the Deities. …

In terms of the vocalists’ performance, he said, “The songs sung by the vocalists were very elegant, and they sang the treble in a very natural way.”

He added, “Traditional Chinese culture encompasses the philosophies of harmonization between heaven and humans, honoring heaven and valuing humanity. The performance today has demonstrated these elements to the audience, which interested me.”

Mr. Jeon Bosam, president of the Korean Association of Museums, said, “Shen Yun Performing Arts’s actors are very lucky as they demonstrate the comprehensive and profound contents of the (traditional Chinese culture) in the form of art.”

Mr. Jeon Bosam holds a Ph.D. degree and is currently serving as president of the Korean Association of Museums as well as curator of the Manhae Memorial Museum. Now, he is a professor at the Shingu University. Speaking highly of Shen Yun, he said, “Chinese historical legends were perfectly demonstrated with these dance dramas.”

He added, “Shen Yun interpreted Chinese historical context through the performing arts. It is indeed very wonderful. It is a very meaningful performance, and it can help people learn something from the things in ancient times. Chinese classics are perfectly adapted into dance dramas.”