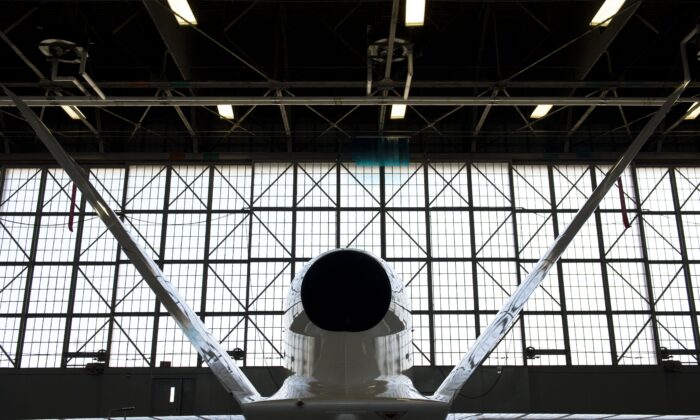 The Chinese regime has been actively growing its fleet of unmanned aircraft to spy on and compete with adversaries such as the United States, a leaked document from China’s Ministry of National Defense reveals.

The July 2017 document, supplied to The Epoch Times by a trusted source, describes Beijing’s ambition to dominate what it called “full dimensional warfare”—referring to control over sea, land, air, space, and the electromagnetic spectrum where military equipment communicates—by developing advanced military drones.

To accomplish that goal, the regime detailed a plan to design one to two types of small, long-range military drones and establish a factory to produce 1,000 drones per year. The document stated there would be a 130 million yuan (about $20 million) investment to create the drone-making firm that would begin production by the end of 2018.

“Implementation of the program will arm our national defense with the latest combat power in future vertical warfare and make it capable to contend with U.S. military weapons, giving it marked military significance,” the document states.

While the file doesn’t reveal the cost for making such drones, a 2017 directive from the Party’s Equipment Development Department described a project that matches the description of the drone program, with an estimated budget of around 6 million yuan ($927,859) to build a prototype and publish a flight test report by 2020.

The Chinese defense department document describes such drones as critical to “whether a nation could engage in modern-day combat.”

“In future warfare, seizing more information resources while controlling and restricting other nations’ information will be a key component for competing with nations during peaceful periods, and an important combat strategy in times of war,” it said, citing “low costs” and the “ability to fight in a dangerous environment” as some of the features that make the drones desirable.

The project called for collaboration with a number of Chinese engineering and aeronautical universities. Zhejiang University, one of the schools named, houses an institute for drone development that has received roughly 100 million yuan ($15.5 million) for projects from the Chinese air force and other state agencies.

China-made commercial drones have dominated the world market. Shenzhen-based dronemaker DJI, which has come under U.S. sanctions for providing “high-technology surveillance equipment” that enable human rights abuses in China, holds around 70 to 80 percent of the global market share as of October 2020, according to market research firm Drone Industry Insights.

In the combat arena, however, China has a long way to go. The current engine types found in Chinese military drones, such as piston and turboshaft engines, are unfit for long flights and high altitude, the leaked document stated. It further noted that Beijing has “made some breakthroughs in replicating Rotax 914,” a four-stroke, four-cylinder turbo-charged engine built by Austrian company BRP-Powertrain that it said has been the world’s leading engine system.

Officials at BRP-Powertrain didn’t immediately respond to an emailed request by The Epoch Times for comment.

The file also mentions four drone models currently deployed in the U.S. Air Force: RQ-1A Predator, MQ-9 Reaper, MQ-9A Reaper, and RQ-4 Global Hawk. It described the last one, developed by Virginia defense tech firm Northrop Grumman, as the most advanced one used in the U.S. military. That model is known for its ability to fly at altitudes of up to 60,000 feet for more than 30 hours.

The new drone, the document states, should be able to fly for more than 24 hours with a carrying capacity of 6 kilograms (13.2 pounds).

Two lines of Chinese military drones, Wing Loong and Caihong (also known as Rainbow) made by subsidiaries of state-run aerospace firm Aviation Industry Corp. of China, also were cited in the document. Military experts have suspected some models to be clones of U.S. drones due to their resemblance to the Predator and Reaper models manufactured by San Diego-based firm General Atomics.

In recent months, DJI has faced scrutiny from the United States for copyright infringement issues and for security vulnerabilities, which the U.S. Army warned could be exploited by the Chinese regime to control the vehicle or hijack data.

The Justice Department has prosecuted multiple individuals for conspiring to export drone-related technologies to China.

In August 2017, Chinese national Sun Fuyi was sentenced to three years in prison over a scheme to procure high-grade carbon fiber, which has applications in drones and other aerospace technologies, for the Chinese government.

In August 2016, California resident Man Wenxia was sentenced to 50 years in prison for attempting to export military equipment, including a drone, on behalf of the Chinese military.

In 2014, two Taiwanese nationals pleaded guilty to their roles in conspiracy to traffic parts from a small drone known as “RQ-11B”—manufactured by U.S. defense contractor AeroVironment—and manuals for the RQ-4 Global Hawk drone.

A retired University of Tennessee professor in 2009 received a 48-month sentence after admitting to illegally exporting 15 different defense materials to a Chinese national. The data he transported involved a U.S. Air Force project to develop an advanced form of weapon system drone.