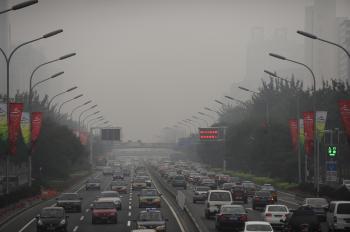 Cars drive through thick smog on a street in Beijing on September 21, 2008. (Peter Parks/AFP/Getty Images)
China

By Grace Wu
Print
Despite official boasts of increased “blue sky days,” hourly Twitter updates from the U.S. Embassy in Beijing report air quality as “very unhealthy” and even “hazardous.”

“Blue sky days” are when the air quality is rated as “moderate,” averaging a reading of 100 or less on the Air Quality Index. Beijing’s Environmental Protection Bureau reported meeting its targeted 256 “blue sky days” per year, early last November.

On the same days that Beijing deems the air quality “moderate”, readings from the U.S. Embassy’s own monitoring station reflect otherwise, appearing to contradict official claims that air quality has significantly improved since the 2008 Olympics. On June 18, the embassy reported air quality as hazardous, while Beijing’s official data read “slightly polluted.”

Part of the reason for the difference may be a matter of standards. The embassy measures air quality based on the United States’ EPA standard, which measures airborne particles such as soot, dust and liquid droplets with diameters smaller than 2.5 micrometers (PM 2.5). China measures air quality based a less rigorous scale of particles less than 10 micrometers (PM 10). Particles with PM 2.5 pose greater health risks than those with PM 10, since they are not as easily expelled via coughing.

The embassy has been conducting its own measurements as a resource for the health of its staff, according to embassy spokesperson Susan Stevenson, interviewed by Time. The data is shared on the embassy’s Twitter feed, BeijingAir.

Another possible factor behind the discrepancy is the location of monitoring systems. Steven Andrews, an American environmental consultant, has suggested that Beijing officials have moved monitoring stations to less polluted areas so they would reap better data. Du Shaozhong, deputy head of the Beijing Environmental Protection Bureau, denies such allegations, though he did not elaborate on possible reasons for the inconsistent figures.