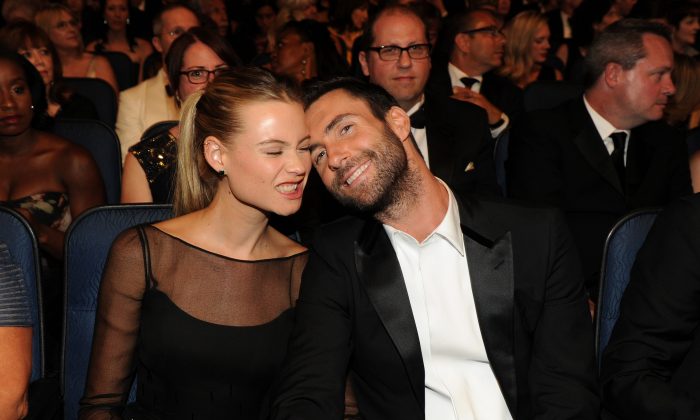 Model Behati Prinsloo, left, and singer Adam Levine in the audience at the 66th Primetime Emmy Awards at the Nokia Theatre L.A. Live on Monday, Aug. 25, 2014, in Los Angeles. (Photo by Frank Micelotta/Invision for the Television Academy/AP Images)
Entertainment

As Adam Levine and the rest of the judges return to The Voice, fans are wondering about his wife Behati Prinsloo, a Victoria’s Secret model.

Prinsloo, 25, hails from Grootfontein in Namibia, and started her rise to fame at age 16 when she was discovered by the same scout who discovered Kate Moss.

Prinsloo modeled for numerous magazines and fashion shows before becoming the  face of Pink, a Victoria’s Secret sub-brand, in 2008.

The next year she moved on to become a Victoria’s Secret angel.

Prinsloo and Levine started dating in 2012 and were engaged in July 2013. They married in Mexico at Flora Farms in Los Cabos a year later.

About 300 guests attended the wedding, including model Candice Swanepoel, a close friend of Prinsloo’s, and actors Jonah Hill and Jason Segel, according to Us Weekly.

Levine’s Maroon 5 bandmates were all there, and guitarist James Valentine performed during the ceremony.

Prinsloo went for a custom-made blush Marchesa gown — the result of a four-month collaboration with Georgina Chapman, who established the brand alongside Keren Craig, reported People magazine.

“She was inspired by a runway dress from fall 2011,” a rep for Marchesa said.

However, the model has described her personal style as “more like hippie-bohemian,” with many jeans, sundresses, and t-shirts.

Levine and Prinsloo have had trouble before, splitting briefly in 2013, but ultimately decided to wed.

“Famous last words, ‘I’ll never get married,'”Levine joked during an appearance on The Tonight Show with Jay Leno last October. “I still don’t necessarily think you have to get married unless you meet someone that makes you want to marry them. And then you marry them and it’s wonderful.”