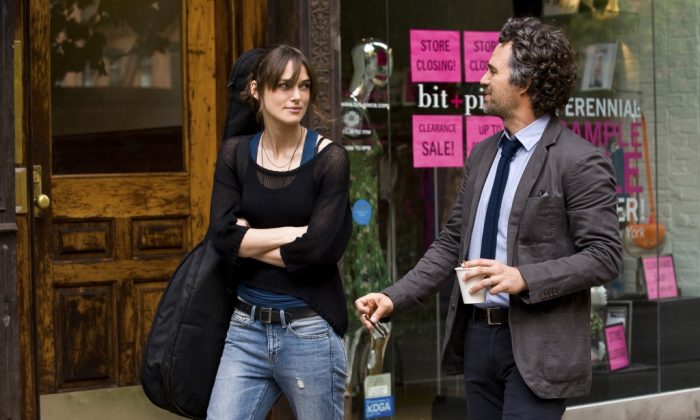 Keira Knightley, Adam Levine and Mark Ruffalo co-star in a genteel, cinematic slice of musical Americana in John Carney’s Begin Again.  This film was nothing that I expected and that is the refreshing part.

Shot amidst the grandeur that is Manhattan,  New York City,  Begin Again is the story of Dan (Mark Ruffalo), a once flourishing, but now down-on-his-luck music producer who can’t seem to find his mojo, and the reclaiming of his mojo via an  unknown singer-songwriter named Gretta (Keira Knightley), whom he unwittingly discovers while in the midst of a drunken stupor.  It is via this early scene that showcases Dan’s discovery of Gretta that I very quickly take an affinity for this production and I realize that the character Dan is indeed a visionary, and probably far more gifted than his partner Saul (Mos Def / Yasiin Bey).  Allow me to back up a bit and introduce Dan before he stumbles into the East Village club where Gretta is playing.

We are introduced to Dan as he drives through the streets of Manhattan sampling demo Cd’s. Frustrated by the mediocrity of what he hears, Dan cusses, growls, laments out loud, and tosses Cd’s out of his car window.

From there Dan picks up his emotionally distant daughter Violet (Hailee Steinfeld) and takes her into the office with him where he arrives late for a meeting.  His partner Saul (Mos Def / Yasiin Bey) takes on the most unpleasant burden of having to fire Dan from his own company.  Dan vehemently protests his firing and ultimately makes a fool out of himself in front of somewhat estranged daughter

Dan and his emotionally distant teen daughter Violet sit in a bar after Dan is fired by Saul.

THE GLORY DAYS……. DAN AND SAUL on a faux cover of ROLLING STONE magazine.

Awashing himself in booze, Dan winds up at an intimate club in the East Village where a young woman, Gretta, is reluctantly egged on stage to sing by her best friend Steve (James Corden). Gretta isn’t comfortable because she doesn’t fancy herself as a singer, but as a songwriter.  As Gretta begins to strum and sing, Dan is jolted from his near unconsciousness and arises with an inner-knowing that fate has directed him into this bar to hear this woman and her song.

Albeit still drunk, Dan’s spirit is refreshed and he comes alive.  He gets up out of his chair.  As if he has entered the pearly gates of heaven, he smiles, his eyes dance, and for the first time… I have an affinity for the actor Mark Ruffalo.  And it is at this point of the film that I realize that this production is an artistic gem.

Why?  Well, while I’m in no way a musician, I have an ear for music, and a respect for musicians and composers. I am sometimes left in awe and curiosity with regard to how the genius of the compositions are manifested, and it is at the point in the film where director John Carney successfully renders a visual into the brain of a composer or a musical prodigy.

As Gretta strums and sings, Dan gazes up at the stage as if mesmerized.  Behind Gretta a playerless piano begins to play.  The same for drums and a violin – and the song is whimsically transformed.  I sigh.  Ah…. Dan can hear what I cannot hear as I listen to this woman sing.  He can hear this innately and instinctively. and as the observer I immediately appreciate this scene and this revelation. Prior to this scene we really don’t have a full grasp on who Dan is.  Was he simply a second-rate music producer who fell into fame via sheer happenstance and good-luck? Was he full of himself and deserving of having been down on his luck?

In one fell swoop Carney, via this scene, conveys to the audience that Dan is a musical genius… a visionary.  He could no longer produce good talent because indeed the good talent had failed to marry into his path….. until this night.

Dan grabs up Gretta and convinces her that while he is indeed drunk, that he is a well-known record producer and that he wants to produce an album for her.  The next morning Dan enthusiastically sits a rather glib Gretta down in front of Saul who is rendered unimpressed.  He does not hear what Dan hears and beckons Dan to go into a studio and come back with a demo.

MOS DEF  (aka Yasiin Bey) as Dan’s partner Saul who kicks Dan out of the company that they both founded.

But as Dan later sits down with Gretta, his proverbial wheels begin to spin.  He’s still a producer in his own right.  He realizes that he does not need Saul, and in his brainstorm of creative ingenuity he realizes that he neither even needs a studio.

Dan quickly convinces Gretta that they can record an album with New York City as their recording studio. Open Air! Thus begins the spiritually uplifting, artistic collaboration between producer and singer-songwriter.  As these events unfold the audience is then introduced to the chain of events that steered Gretta into the club on that fateful night.

Flashback to Gretta’s arrival in New York City.  She is with her boyfriend Dave (Adam Levine), a singer-songwriter who is about to go on tour.   He is embarking upon the genesis of new-found success.  Gretta is asked to snap of picture of him with a few female fans as they are about to walk into their new apartment.  Dave is a modest artist who wants to keep his girlfriend Gretta alongside him in his journey to super-stardom.  But the record moguls (and even Gretta) recognize that she is dead weight, and Gretta gets Dave off of the hook by declaring that she is just happy to be along on his journey, and that she has had nothing to do with the soundtrack music that is about to catapult him into certain fame.

Gretta graciously awaits Dave’s return after he goes away to Los Angeles, but when he returns he admits to her that he has fallen for another woman on the production team.  Devastated, Gretta makes her way to her friend Steve’s apartment and drowns herself in pity until he convinces her to join him at the club.  It is there where we return to Steve who beckons her to come on to the stage to sing one of her songs, and she reluctantly acquiesces.

Dan as well seems to be an outcast from the domicile that his wife (Catherine Keener) and daughter share, yet the viewers are not really privy as to why.  Dan instead lives away from them in a small apartment.

Both in the throes of domestic turmoil, Gretta and Dan bond and find solace via their musical journey as artist and producer.

GRETTA AND DAN bond as artist and producer

From this point, the film continues along on a most stimulating and inviting path of music innovation.  The music of Gregg Alexander (former front man of The New Radicals) takes center stage and enchants audiences with upbeat pieces reminiscent of soulful/pop 1970’s sounds. With his own set of distinctive and indelible Gregg Alexander prints on many of the tunes, my subsequent enchantment with the sound that I was hearing forced me to go online to look  him up.

Yes, he was the melodic force behind the Michelle Branch and Carlos Santana hit Game Of Love. As well as he creative force behind a favorite song of mine by The New Radicals, called You Only Get What You Give.

(where they Catch A Cop in a net)

SINGER-SONGWRITER GREGG ALEXANDER…. Past and Present. No longer a kid.

Begin Again highlights a number of Alexander tunes but most notably the hauntingly soulful Lost Stars, which is my favorite, along with my second favorite No One Else Like You. You hear the upbeat 70-ish sounding No One Else Like You  and then you recognize…. Ah, yes, these have the same Alexander-ish prints as Game of Love and  You Only Get What You Give.  Indeed each song is reminiscent of the other and yet each one as uniquely soul-stirring as the next, and Adam Levine sings the heck out of these Alexander tunes.

Other songs in this purchase worthy soundtrack are Coming Up Roses, and Tell Me If You Wanna Go Home.

The soundtrack alone (now generating Oscar buzz)  is reason enough to see this film, and better yet is that this production takes the viewers on a satisfying journey every step of the way.  Director John Carney’s love of music (he is also the writer of Once) successfully illuminates the production and renders it an absolutely pleasure to watch.

(SPOILER ALERT- this clip is the actual ending of the film.  Click and listen, but

Begin Again serves as a production that successfully highlights not only good music, but it highlights the city of New York, the music industry as a whole, and an ensemble of America’s best actors and actresses.  Somehow, in the past Mark Ruffalo has always failed to move me.  I was finally stirred by his portrayal of the character Dan who blossoms from a sad-sack into an animated man in love with life again via a musical muse.

Singer-Songwriter Adam Levine  as well is surprisingly well polished for an acting novice. Keira Knightley charms the production with a not-previously-known, very simple, very soft, whispery, and believable voice that simply works.  No, she’s no Barbara Streisand, but she doesn’t need to be. Viewers believe Knightley as a singer and if that particular aspect of the production did not work, it would have rendered the production an utter and complete bust.

Hailee Steinfeld continues in her critical acclaim as a credible up and coming young actress, and Catherine Keener is as solid as she always is.  Mos Def (aka Yasiin Bey) as well always delivers no matter the performance genre.

Released in the summer of 2014, I am at a loss as to how this production fell through the cracks. I ponder from time to time if the appearance of Cee Lo Green, and his sexual assault charges that also occurred in the summer of 2014 had anything to do with it.  While Green’s part in this film was rather small, it was also somewhat pivotal.  Perhaps word got out that this was a film “starring” CeeLo Green (which is was not) and such a rumor may have hindered box office sales as well as limited movie house distribution numbers.

Whatever the reason Begin Again fell through the box office cracks – it was certainly a magnificent failure for the masses to have missed such a charming production written, directed and produced by John Carney.  Certainly this piece is nothing at all for Carney to be anything but utterly proud of.

Begin Again may have fallen through the cracks in theaters, but it’s available now in video release.  Don’t miss it!  This one of the best music themed indies to grace the screen. A must-see for music lovers.  104 minutes long, this R-rated film (for language) is a 4-star production that is worth the price of your purchase or rental.