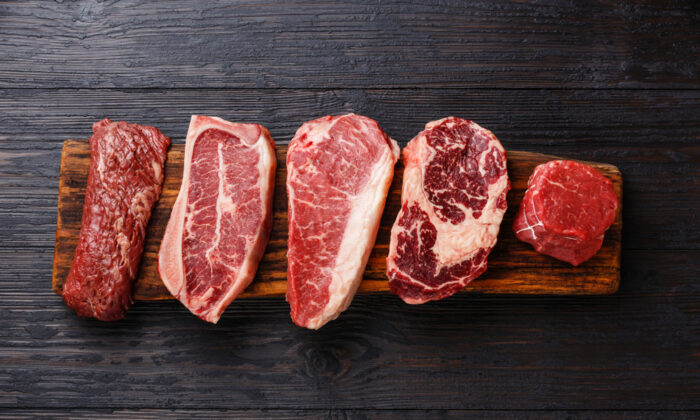 When we think of protein sources, fresh meat is at the top of the list. (Natalia Lisovskaya/Shutterstock)
Inflation

Beef prices are declining for now, bringing some relief to American consumers who appear to be lately favoring cheaper sources of protein like chicken, as inflation started to spike months ago.

Consumer demand had been trending towards cheaper cuts of meat or other sources of protein like poultry.

The average price of steak is typically among the more expensive grocery store purchases, but is now heading downwards after over a year of price increases.

Although overall food prices increased by 10.9 percent in July from the same month last year, the price of uncooked beef steaks fell by 1.2 percent over the same period.

The price of sirloin steaks and round steaks have fallen 1.4 percent and 2.6 percent, respectively.

However, ground beef, the cheapest of beef products, which has always been in high demand, rose by about 7 percent during  the period, compared with a roughly 20 percent increase in January.

Even after two consecutive months of declines, beef prices generally remain at historically high levels, with packaged beef prices remaining roughly 30 percent above their five-year average, according to the USDA.

Meanwhile, other categories of meat and poultry have headed upward due to heightened demand, somewhat negating the positive news regarding the price of steaks.

King said that an entire chicken has gone up by 3 percent, a piece of chicken breast is up 0.9 percent, pork chops are up 2.6 percent, while Grade A eggs have risen 8.5 percent.

Many American families have been modifying their consumption habits this year to make ends meet, as inflation continues to outpace the rise in wages.

The price of food and consumer products have been rising for months due to higher costs of transportation, ingredients, and labor shortages.

The biggest increases have been in the meat and dairy section, but as beef prices plateau, consumers will find more deals and options, said industry executives.

The pace of inflation eased slightly in July from a four-decade high to 8.5 percent, as gasoline costs fell from June levels, along with a decline in the prices of used cars and airline fares.

Grocery prices were up 1.3 percent in July compared with the previous month, while the cost of dining at restaurants increased.

Supplies of beef are improving due to better staffing at meat plants, but a continuously tight labor market and higher employee turnover rates combined with high levels of absenteeism since the pandemic are still limiting processing capacity in the meat industry.

Meanwhile, many cattle have been directed to processing plants as ranchers cull the size of their herds, due to persistent drought conditions in cattle regions across the country, which is partially responsible for the recent spike in supply of beef at grocery stores.

That may lead to a decrease in beef cuts as the cattle supply tightens over the next several months due to smaller herds.

U.S. beef production is expected to decline later in 2023, as the constrained supply of cattle ultimately raises the price of beef, according to the USDA and agriculture executives.

King said on a call with analysts earlier this month, that he expects the company to pay more for cattle going into 2023 and through 2024 as supply tightens.