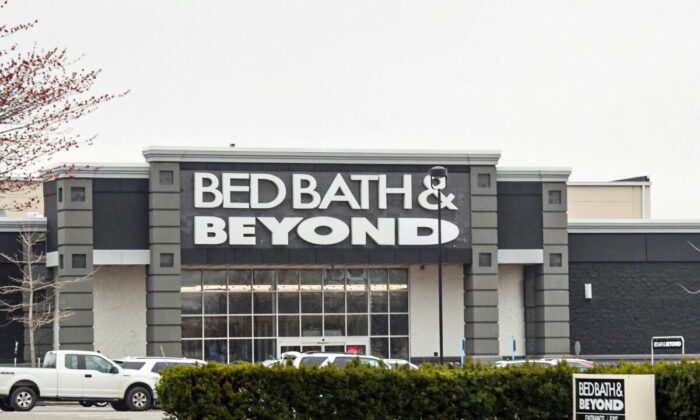 A general view of the Bed Bath & Beyond sign as photographed in Westbury, N.Y., on March 20, 2020. (Bruce Bennett/Getty Images)
Companies

Bed Bath & Beyond (BBBY), the home goods retailer, announced on Jan. 7 that it is kicking off 2022 by permanently closing 37 stores in 19 states across the United States by the end of February.

The store closings are part of a plan that it announced back in 2020 to shut 200 redundant locations over the next two years as part of a broader turnaround effort after several years of declining sales.

The home goods retailer said it has closed roughly 170 locations thus far and is still on track to hit its 200-store goal by year’s end.

Liquidation sales have already begun at the 37 locations, which account for 21 percent of the remaining Bed Bath & Beyond stores.

In this latest round of store closures, New York will lose seven stores, California will close five, and Washington, four.

The retailer will remodel its remaining locations to reduce clutter with brighter signage and new brands.

BBBY reported its fiscal third-quarter results on Jan. 6, which closed the day up nearly 8 percent after diving 9 percent in premarket trading.

The company’s shares have been down about 31 percent over the past 12 months.

Mark Tritton, CEO of Bed Bath & Beyond, spoke with CNBC’s Jim Cramer on Jan. 6 about his company’s disappointing quarterly results.

Tritton admitted that BBBY lost about $100 million in sales during the third quarter due to COVID-related inventory and supply-chain issues.

He said that he was upbeat on the company’s remodeling efforts, explaining that the plan to refresh 400 stores over the next three years remains on track with 80 locations refurbished thus far.

BBBY’s flagship Buy Buy Baby chain remained a bright spot for the retailer in the last quarter, as sales in home and bath goods have slowed.

Tritton told Cramer that the Buy Buy Baby chain is one of the “true assets” of his company and is on track to deliver $1.3 billion in sales.

Birth rates have risen as millennials start raising families, which is amplifying the momentum at Buy Buy Baby, according to Tritton, as sales of baby food, car seats, and other accessories have increased.

The BBBY CEO told analysts that the company will explore additional closures in the future.

“We are executing a full-scale transformation and simultaneously running a business in a highly unpredictable environment,” said Tritton at an earnings conference call.