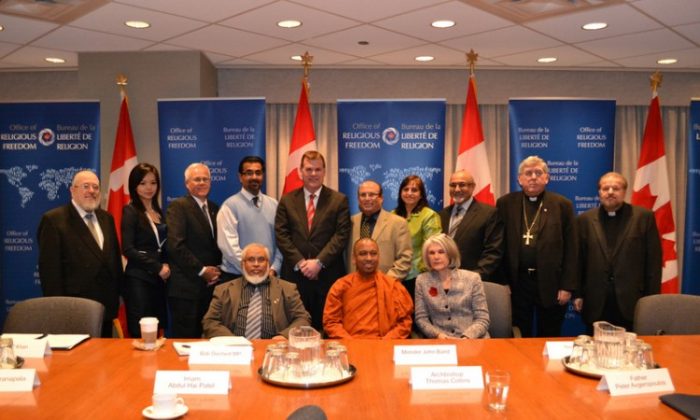 Miss World Canada contestant Anastasia Lin hopes to win the competition in order to become "a voice for the voiceless," her motto for the pageant, which will be held in Vancouver in May. (Courtesy of Anastasia Lin)
Canada

For Miss World Canada Contestant, Beauty With a Purpose

A film and television actress, model, human rights activist, and fulltime student at the University of Toronto, this year she has added competing in the Miss World Canada competition to her already packed schedule.

“It’s been really positive, a lot of challenges as well,” says Lin as she takes a break from writing a university paper to talk with The Epoch Times.

“During the last few years I feel I have matured a lot, and I think I’m able to take on a lot more pressure than before—because I’m seeing that I am really affecting people in a positive way.”

Determined to be “a voice for the voiceless,” Chinese-born Lin, 23, has dedicated her life to religious freedom, weaving this mission into everything she does.

“I think that freedom of belief is such an important thing—everybody needs to have the right to choose what they want to believe,” says Lin.

“Belief is such a strong thing. It is unlike anything else—once people have a belief it’s in their soul, you can’t just take it away from them. If someone tries to take that away it will be like emptying a person’s soul.”

In 2011 she was one of 10 youth leaders selected to meet with MP Bob Dechert, then parliamentary secretary to Foreign Affairs Minister John Baird, in consultation for the establishment of Canada’s Office of Religious Freedom.

The following year, Lin was chosen as one of the 11 stakeholder representatives to meet with Baird himself about the Office of Religious Freedom. She advocated for greater freedoms on behalf of Tibetans, Falun Gong practitioners, Uyghurs, underground Christians and Catholics, and other groups persecuted in China.

She says attending the two roundtables made her feel that she really could be an effective voice for freedom of belief in her home country.

“So if I do win the competition I hope I can do a lot more things like that and to speak up for those people, and really use the title efficiently so I wouldn’t let all my supporters down, because I know that they supported me for a reason, and they supported me because they wanted me to be the voice for them or those who they care about.”

‘It always starts with your heart’

The slogan for the Miss World competition—the oldest surviving major international beauty pageant—is “Beauty with a Purpose.” The pageant has a history of humanitarianism and philanthropy, and has raised $500 million for children’s charities to date.

Miss World Canada chairman and CEO Ike Lalji says the winner of the competition will be an ambassador for Canada, with responsibilities such as getting involved in different humanitarian and philanthropic projects and helping approved charities.

“There are many values to being an ambassador and leader to represent Canada around the world, but I think it always starts with your heart,” says Lalji.

“You have to have the heart to help other people and then all the rest falls into place. We are looking for an ambassador that has the heart for helping people, and someone who’s very compassionate, humble—someone who would set a good example to the rest of the young people in our country.”

Lin was inspired to join the competition after meeting Nazanin Afshin-Jam, a former Miss World Canada and wife of Defence Minister Peter MacKay. Afshin-Jam is a tireless crusader and activist for human rights.

“When she spoke to me, I just felt like this would be a great platform to speak up for human rights,” says Lin, adding that the mission to serve others is what keeps her grounded.

“Sometimes I will feel like it’s quite overwhelming. I was not sure I could do everything, but then I think what kept me going was the fulfilling of the mission. I just feel like this is a responsibility, rather than something for myself.”

The Miss World Canada 2013 pageant will take place May 8 and 9 in Vancouver at the River Rock Casino Resort. The winner goes on to the Miss World competition to be held in Indonesia on Sept. 28.