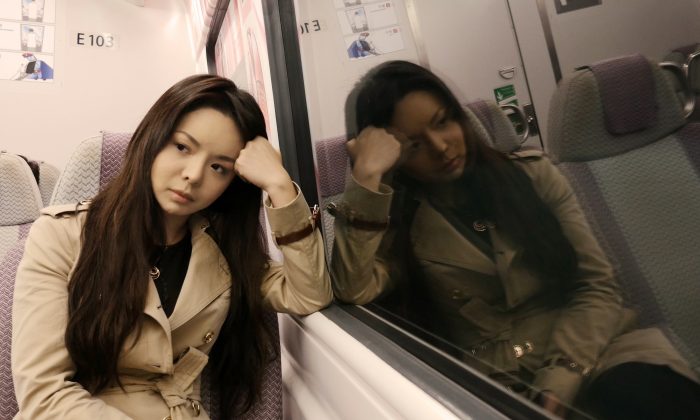 Beauty Queen That Made China ‘Run Away’ Says Many Chinese Live in Culture of Fear, Risk Persecution

She went from being promoted as an international star in China’s state media after winning Miss World Canada to seeing her father’s livelihood destroyed because she wouldn’t stay quiet about the human rights abuses in her home country.

Now, Anastasia Lin is a scholar-in-residence for one month with the Australian think tank the Centre for Independent Studies.

The 29-year-old, described in a Globe and Mail editorial as the beauty queen that China saw and ran away from, revealed in an intimate interview that she has been told by many Chinese diasporas around the world that they worry about persecution from their fellow Chinese, including their own family members, due to the culture of fear instilled in Chinese minds by the communist party.

She said that the communists in China have laboured to create a “very artificial fear” among the populace, leading many mainland Chinese to feel “obligated to persecute” people who stand up to the government.

“You’re obligated to stand by the party line and to suppress your fellow Chinese,” Lin said in an interview with the Menzies Research Centre think tank.

She gave the example of what police did to a high school student in Adelaide.

“She told me that when her father went back to China—because her family is [a] rather outspoken diaspora here in Australia—the police went to ‘have a cup of tea with him.’

“Being invited for tea is a Chinese way of saying that you’re being threatened by the police in a private conversation,” she explained. “They told him that if he continues to be vocal about things that the Chinese government doesn’t like, the daughter … when she applies to Adelaide University, her application might be denied. That’s here in Australia.

“Unfortunately, some Australian universities … they’re placating to Beijing, silencing freedom of speech, cancelling speakers that are sensitive to the Chinese government, and not allowing these students a safe environment to really study what they’re coming here to study,” she said.

Lin said she knows the story of the Chinese Communist Party’s (CCP) intimidation all too well.

Her father, who was a very successful businessman in China, demanded that Lin stop speaking publicly about human rights abuse in China after she won the Miss World Canada title in Vancouver in 2015.

“Stop doing that or you’re ruining the family,” he told Lin, leading her to realise that he was being threatened by the police.

“When I first won and the Chinese media were reporting about it in a nice way, people from all over China were sending him congratulatory messages,” she recalled. “Chinese media even interviewed him and wrote about him as this wonderful father who raised an extremely extraordinary daughter.”

But when he threatened to disown her, Lin said one thing became clear to her: the Chinese regime was using “the same tactic that they used in the cultural revolution on the families that broke up, on the society that broke down, the public enemy that were executed … it is a horrible thing.

“I think what communists [were] trying to do is take [family bonds], that very basic instinct of human beings away. And that’s exactly what they’re trying to do to me.”

Lin said after some soul-searching, she understood that her father’s actions were being driven by fear. That’s when she decided that she didn’t want to repeat what the previous generation had done and would listen to her own voice.

“I felt like after making that decision, I got closer and closer to the way I actually want to live, as a conscious being,” she said.

According to Lin, this tragic situation is the same faced by many Chinese families around the world.

“They’re using it as a weapon,” she said of the regime, to “create fear among other Chinese people. They control China using the tools of lies and manipulation.”

Lin says that recent events in Chinese history, like the cultural revolution, have “twisted and manipulated” mainland Chinese people—something she observed after moving to Canada from Hunan, China, at the age of 13.

“I’m not being racist here,” she said. “Just imagine a really beautiful animal being all of a sudden forced to go into combat mode and stripped of all its natural elegance that it was born with,” she said, after reflecting on her life in mainland China. Lin herself had been a communist youth leader in China, tasked with organising her classmates to watch mandatory propaganda videos and repeat communist party slogans.

But she said upon moving to Canada, she saw a big difference between mainland and other Chinese.

“When I visited Taiwan, I saw the Taiwanese bureaucrats, the way that they were acting … all of a sudden I felt this joy,” she said. “It’s almost like I’ve seen what China would be, could be if communists didn’t take over. There’s that gentleness, that grace that our ancestors passed down.

“In the past, because Chinese people believed in the divine—we had God and of course Communism is atheist. So for them, traditional belief itself is the biggest enemy of the communist party because it is their obstacle to obtain total control over the minds and hearts of Chinese citizens.

“That’s why the cultural revolution was not an accident; it was not Mao’s strategic mistake. It was a deliberate eradication of the biggest enemy of the Chinese communist party.”

Lin added that in her view, the difference between China and the West isn’t that Chinese do not want or celebrate freedom.

“In China, we want freedom too. But it’s not there; it was taken away by the Chinese communist party. That’s the difference.”

She encouraged the West to not take freedom for granted. Otherwise, we might have to fight for it like the protesters in Hong Kong.

“This is the privilege that our ancestors … our grandfathers and fathers got it right, and we’re living in a society where we’re able to be free. Don’t take it for granted.”

Anastasia Lin will be speaking at the Centre for Independent Studies on Aug. 22 to debate if it is “Time to get tougher with the PRC.”