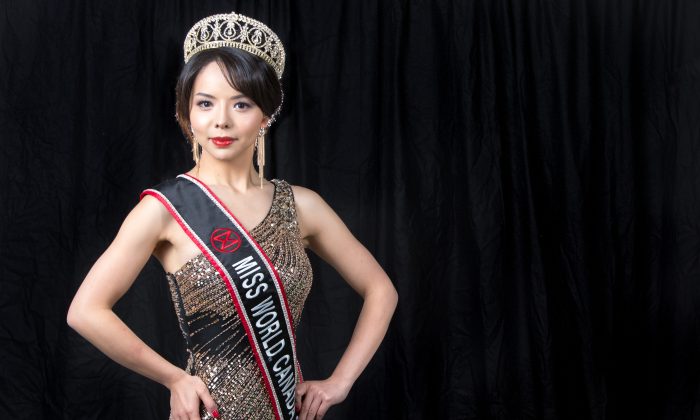 Anastasia Lin is known as fearless, feisty, and ferociously articulate in matters concerning the Chinese regime’s abuse of human rights—in particular, the forced organ harvesting of prisoners of conscience.

The Chinese communist regime appeared to take issue with the reigning Miss World Canada’s criticisms and blocked her from entering China for the 2015 edition of the competition, which was held in southern China. To make up for it, the Miss World organizers allowed Lin to again represent Canada when the beauty contest headed to Washington, D.C., this year.

In the lead-up to the pageant, however, Lin was silent, a stark contrast to her vocal, high-profile activism; she had even visited the Dalai Lama this March, just months earlier.

Epoch Times recently learned through friends of Lin that pageant organizers had, until Wednesday, Dec. 14, declined to grant her permission to speak to the media, and had threatened her with disqualification if she did, per a clause in the contract between contestants and the Miss World Organisation.

The move garnered widespread media attention and unflattering commentary on the beauty pageant organizer. Late in the day on Dec. 14, after articles appeared in major media in multiple languages around the world, the ban blocking Lin from speaking to reporters was apparently lifted and Lin spoke to The New York Times.

When reached via text message that night and asked if she could now speak to media, Lin replied with a smiley face emoji and said an interview could be set up through the official Miss World press contact.

The prior decision of the Miss World organizers to effectively censor Lin in the capital of the United States, seen as a bastion of democracy and freedom, brought them unwelcome attention and raised Lin’s profile considerably.

Afraid of a Beauty Queen

Lin, 26, won the 2015 Miss World Canada competition by campaigning on human rights issues, and almost immediately became a victim of the Chinese regime’s rights abuses herself: Lin’s father was and continues to be harassed by Chinese security officers over her advocacy, and she was later denied entry to China for the Miss World finals.

“Ask the Chinese government why it is afraid of a beauty queen,” Lin told reporters in Hong Kong on Nov. 25, 2015, where she made a last-minute effort to board a plane to the Miss World contest venue in Sanya, Hainan Province. “Ask them what kind of precedent this sets for future international events.”

An email request to the Miss World Organisation for an interview with Lin went unanswered; several media outlets had also reported a lack of response from the organization.

Pageant staff had been actively monitoring and vetting Lin’s meetings and appearances.

A Miss World official accompanied Lin when she met with David Saperstein, the U.S. Ambassador-at-Large for International Religious Freedom, on Dec. 9. The State Department was asked not to post a tweet of the meeting.

Recently, Lin was whisked away by pageant staff after they spotted her speaking to the Boston Globe‘s Jeff Jacoby in the hotel lobby where the contest is being held. The Miss World Organisation, which controls all media interview requests with contestants, has allowed at least three other contestants—Miss World Germany, Miss World Myanmar, and Miss World Thailand—to speak to the press.

Also, Lin originally couldn’t attend the U.S. premiere of “The Bleeding Edge,” a film she stars in, according to event organizers Victims of Communism Memorial Foundation. On Dec. 14, the date of the screening, Miss World Organisation CEO Julia Morley told Hollywood Reporter that Lin had “always been free” to attend the screening. A representative for Lin confirmed that she will be present for the premiere.

In contrast, there were no concerns over Lin’s attendance at the United Kingdom premiere of “The Bleeding Edge” at Speaker’s House in Parliament this September. The film, which dramatizes forced organ harvesting and the Chinese regime’s advanced surveillance systems, was directed and produced by Leon Lee, the winner of a prestigious Peabody Award for a documentary on organ harvesting.

Lin’s being censored by Miss World is an example of “the extension of China’s influence well beyond its borders … and how desperately China wants to prevent people from speaking out and exposing the truth on human rights generally, and particularly on the issue of organ harvesting,” Benedict Rogers, a friend of Lin and deputy chair of the U.K. Conservative Party Human Rights Commission, said in a phone interview.

“The fact that this is happening in Washington, D.C., a city that most associate with freedom, is particularly alarming.”

The fact that this is happening in Washington, D.C., a city that most associate with freedom, is particularly alarming.
— Benedict Rogers, U.K. Conservative Party Human Rights Commission

A History of Censorship

In censoring Lin, the Miss World executives appeared to be safeguarding their business relations with their sponsors, who are largely Chinese companies.

In the past, many Western companies, particular tech giants like Google and Yahoo, have been known to conduct censorship on behalf of the Chinese regime.

This phenomenon appears to be ongoing. Facebook employees recently revealed that the social media company is creating a “China censorship tool” as part of CEO Mark Zuckerberg’s efforts to break into the Chinese market. “It’s better for Facebook to be a part of enabling conversation, even if it’s not yet the full conversation,” Zuckerberg reportedly told employees.

Western companies might not be aware that what the regime wants more often than not serves to help the Chinese Communist Party better control and suppress the Chinese people.

“Sadly, too many people in the Western world are willing to kowtow to China, and allow Anastasia be silenced,” Rogers said, speaking earlier in the day before the ban was lifted.