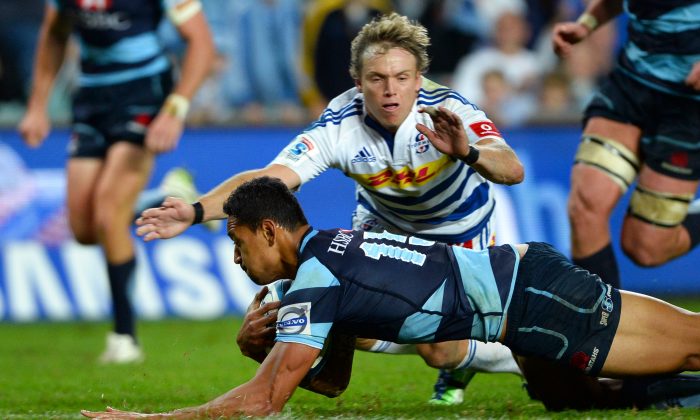 The Wallabies have virtually lost fullback Kurtley Beale for the Lions tour of Australia, which begins on June 5. But code-hopping Israel Folau could be his surprise replacement.

Beale has been stood down indefinitely from the Melbourne Rebels and checked into a private facility for counselling following another drink-related incident.

A mentor, the legendary Wallaby Mark Ella, said Beale should miss selection for the Lions Tests as “part of his rehabilitation”.

The Lions tour Australia once every 12 years and Ella said fans wanted to see “the best team on the park”. Despite that, Beale had failed to live up to Wallaby “traditions” – “getting drunk continually is not one of those”.

Another former Wallaby star, Matt Bourke, said star players were being given special treatment. Beale has been reprimanded for again drinking and for missing a proscribed counselling appointment.

Players took agreed-rules like alcohol-bans seriously, Bourke said. Such sacrifices were part of the team spirit, were part of the all-for-one and one-for-all attitude. Breaking such an agreement was a serious offence, in terms of trust among team-mates.

The attitude of the Rebels management to Beale is clear when reading these quotes from a statement issued by the club.

“Kurtley has voluntarily entered a private health facility in order to undertake counselling for ongoing issues,” the statement read.

“He has done this with the backing of ARU, RUPA [the players association] and the Melbourne Rebels who congratulate him on this decision to seek assistance.”

Rebels coach Damien Hill praised Beale further when he spoke to the media.

“I think it’s a courageous move on his behalf and we wish him all the best with that,” Hill said.

“I think the most important thing is that Kurtley’s welfare is foremost in everyone’s minds and we’ll have to wait and see how things turn out.”

Courage aside, Beale was employed as a star international player. He has had numerous, alcohol-fueled escapades, one of which is still awaiting court action.

In another incident in late March, Beale was sent home from a tour of South Africa after punching his captain and another player.

While on Australia, the poorly performing Waratahs beat the Stormers in Sydney 21-15. A late try by rugby newcomer Israel Folau sealed the tough match.

Folau was a rugby league star, playing for both the Melbourne Storm and the Brisbane Broncos in the NRL. He also represented his state, Queensland, and Australia.

He played his first game for the Storm at age 17 and scored the winning try.

At the end of 2010, he signed a four-year deal with the new Australian Football League side, the Greater Western Sydney Giants. Though he didn’t master Australian football, his high profile is credited with helping promote the new club.

He was reportedly paid more than $1million a year.

His adjustment to rugby union has been quick, and if Beale is out of the picture, Falou may play for the Wallabies against the Lions as fullback.

It would be courageous to blood a player against the Lions, but Falou has played international rugby league and State of Origin league for Queensland – the Origin games are tougher than league Test matches, overall.

In the long-term, Falou will field offers from league and union sides around the world.

However, he came into rugby with the Waratahs, which might count. Also the Waratahs have several players who also have a similar Tongan heritage.

His tenure may coincide with a Waratah revival under new coach Michael Cheika. That revival remains a promise only, but there are hopeful signs.

Falou has been welcomed by the Waratah fans and he has repaid them with an ever-improving game.

Furthermore, he is a big star who is polite and humble, and seems to prefer letting his actions do the talking, which is a breath of fresh air for Waratah fans.

Ironically, there is a rumour that the Waratahs are seeking to re-sign Beale, the logic being he would have more “support” from family and friends in his home town, Sydney.

In other matches, Wallaby discard Quade Cooper was instrumental in the Queensland Reds 32-17 victory over the Durban Sharks in Brisbane. The Reds won the title in 2011 and are building well for another tilt at the title.

The Blues are in title contention as well, after beating a surprisingly strong Rebels team 36-32 in Auckland.

The Force from Perth almost beat the top New Zealand team, the Chiefs, losing a tough game 22-21. The Hurricanes re-found form to beat the Cheetahs 39-33 in Bloemfontein. While the improving Southern Kings beat the struggling Highlanders 34-27.