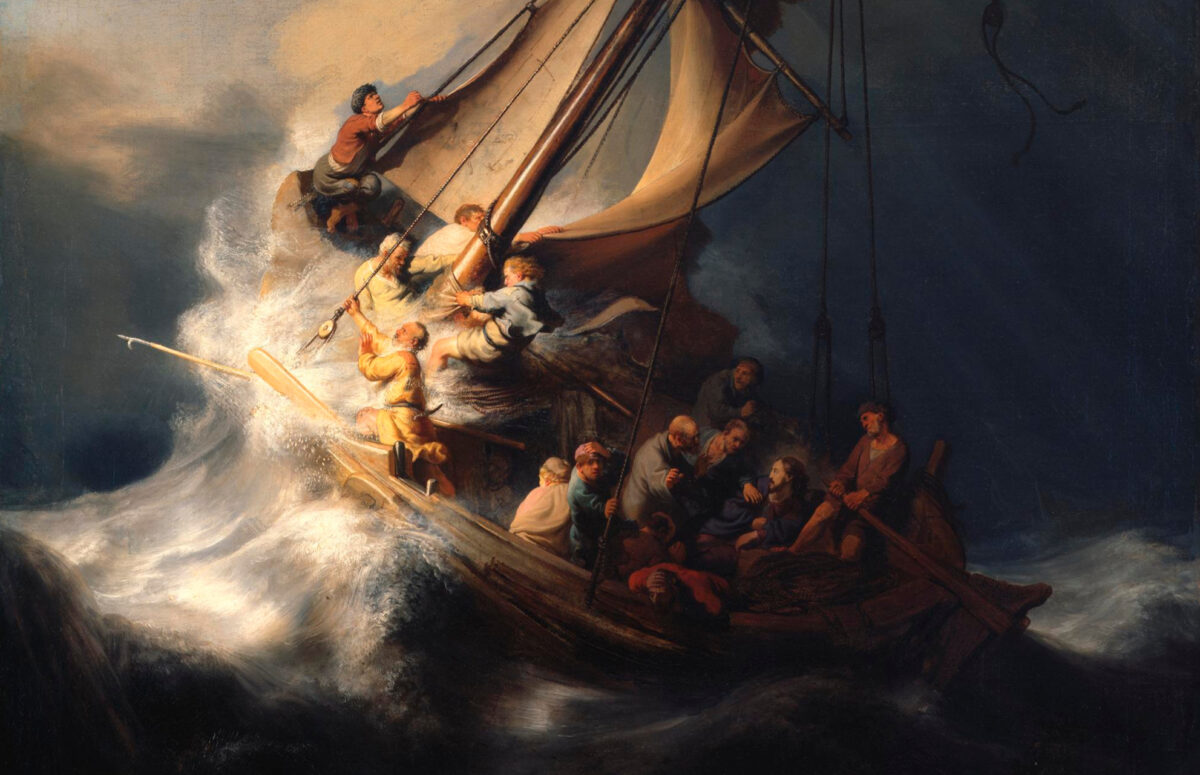 Be Not Afraid: A Lost View of Faith Through the Storm

Art exploration for the young and young at heart
BY Andrea Nutt Falce TIMEFebruary 1, 2022 PRINT

Years ago, an artist friend showed me lovely photographs of the Maldives. As we reviewed the serene images of remote seascapes and sky, he lamented the tragedy of global warming. With the highest point on the Maldive islands cresting at six feet above sea level, scientists in the 1980s began prophesying that global warming would soon overcome the islands, causing them to become submerged. The timeline for destruction was set at 20 to 40 years. In response to sinking fears of a paradise lost, my friend had hastened to schedule a luxurious visit.

When I first looked on pictures of those beautiful islands, I was a young woman. Time has passed. My youth has ebbed. I’ve never yet bathed in privilege along those tropical shores. The good news is, there’s still time.

It’s been many decades since scientists began predicting the demise of the Maldives, and yet, as low as they lie, the islands remain above the water. In 2004, the aftershock of an earthquake did cause a tsunami to submerge a vast portion of the island nation, but global warming has not. According to the U.S. Geological Survey, which monitors earthquakes around the world, the epicenter of the 9.0 magnitude quake that caused flooding in the Maldives was under the Indian Ocean, near the west coast of Sumatra. That Indian plate has been moving for millennia. For the Maldives, the result of this age-old agent of change was that some islands grew as sediment settled upon them. And many island shores shrunk, especially those that had man-made sand deposits. Vulnerable as the islands naturally are, for the most part, post-quake waters have receded. New beach was added again and rebuilding succeeded.

Successful recovery is good news. If you’re the kind of tourist who can make it to such a magnificent place, the latest global crisis called COVID-19 is more likely to waylay you than rising sea levels. Worldwide crises ebb and flow. Fear-mongering finds new faces. In fact, global warming is rarely called global warming anymore. “Climate change” is the more current title for that long-predicted calamity.

Lest too much global crisis talk induce you to cry out, “The sky is falling,” I should probably mention that new volcanic islands are still forming around the Maldives and around the world. As long as the Earth has been developing, volcanoes have been erupting, seas have roiled, climates have changed, mountains and islands have grown and shrunk, and life has gone on.

Natural disasters have left their mark on life for time immemorial. In time memorial, they have even left their mark on art. The Pacific islands have been plagued by environmental catastrophes throughout history. The 1815 explosion of Mount Tambora was a cataclysmic-level eruption. The amount of gas and ash it spewed temporarily altered temperatures on Earth. The blast killed thousands on the Indonesian island and harmed many more far and wide. For those living in lands as distant as Europe and the Americas, 1816, the year following the eruption of Tambora, has been described as “the year without summer.” Crops failed across the world due to the ensuing darkness and cold. The global effects of the explosion are memorialized in English poetry and art. Some say the painted skies of the English artist J.M. William Turner altered in coloration as a result. It’s certain that volcanic subjects occupied his consideration.

The 1883 eruption of another Indonesian island volcano, Krakatoa, is reported to have killed nearly 36,000 people, with the largest blast reaching 50 miles high. The explosion was audible in Australia. The extraordinary volcanic event affected rainfall in Los Angeles and dimmed or tinted the skies of Europe for nearly a decade. Love it or hate it, some say Edvard Munch’s painting, “The Scream,” finished in 1893, may owe its unusual sky to the effects of Krakatoa.

Many a farmer, writer, artist, and human has survived natural disasters—for which he could claim no fault. Many a man and woman in the generations that preceded ours have humbly navigated their way through the wild nature of this world. May we find inspiration in their hardiness and learn from their observations. In this tumultuous world, faith and historical perspective can be great tools for peace and calm.

One powerful example of faith and perspective over fear in fine art comes from the truly magnificent hand of Rembrandt Harmenszoon van Rijn. Painted in 1633, “Christ in the Storm on the Sea of Galilee,” is Rembrandt’s only seascape. Handled with a heightened freshness more characteristic of Rembrandt’s early work, the biblical scene depicts Jesus Christ and his disciples on a ship amid a raging storm. Trials of nature assail the weak and fearful boat passengers as they reach to Christ for salvation. The figure of Christ, glowing with light, both human and divine, looks back at his disciples. The scene is based upon a story from the fourth chapter of the Gospel of Mark. According to Mark, Christ had been sleeping peacefully through the storm before he was awakened by his terrified boatmates. Rembrandt chose to depict the moment before Jesus rebuked the wind and calmed the sea with a few short words. After Christ subdued the elements, he asked his followers, “Why are you so afraid? Do you still have no faith?”

In Rembrandt’s powerful painting, the disciples reach for Christ with uncertain hope and desperation. It’s a commentary on the frailty of man through the frights of life. The scene is directly biblical; it’s also a metaphorical reference to the human struggle with earthly tumult. The only figure who looks out upon the viewer from Rembrandt’s dramatic painting is Rembrandt himself. He includes his own portrait among those of Christ’s disciples.

Rembrandt’s self-portrait is turned outward to engage the eye of the viewer. Van Rijn arranges one of his own hands almost casually atop his hat, as if he would protect it from a light gale. The other hand grasps the ship’s rigging firmly. By his posture, and in his eyes, the painter seems to speak to us even now, exclaiming, “I know who is in charge. It’s not me, and I’m not afraid.”

You may find images on the internet of this extraordinary work about faith, nature, and the struggles of life. But you can’t see it in person. Where “Christ in the Storm on the Sea of Galilee” used to hang, there’s only an empty frame now. At 2:45 a.m. on March 18, 1990, thieves departed the Isabella Stewart Gardner Museum in Boston with 13 famous works of art, committing one of the most outrageous art heists in history. It’s a crazy story for another time.

For now, let us suffice to say we live in a wildly unpredictable world. Fearful men will always be susceptible to hysteria. Deceitful men will ever be poised to snatch peace and beauty from the most susceptible. Today as ever, in the face of trial and trick, a clear perspective remains imperative. May we keep the faith and be not afraid.