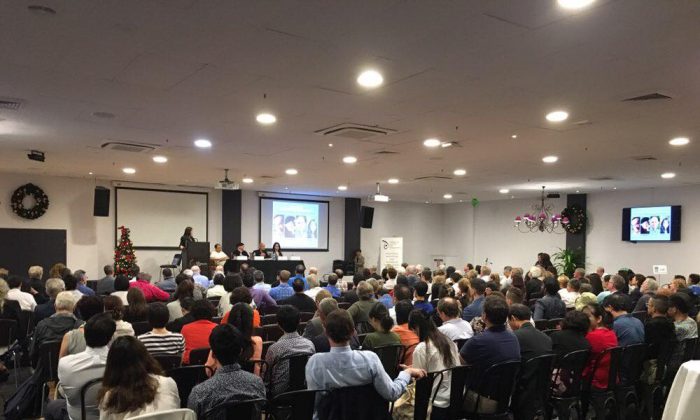 Experts discuss the Chinese Communist Party's interference in Australia and the freedom to speak about such issues at City Tattersalls Club in Sydney, Australia, on Dec. 10, 2018. (J. Zhang/The Epoch Times)
Australia

‘Be Like Bamboo’ to Stand Up to Communist China’s Interference

The Chinese Communist Party (CCP) has exerted its influence around the globe through targeting individuals, and it takes great strength and courage to resist such influences, speakers said at a public panel discussion.

Experts with knowledge on the CCP’s infiltration activities discussed on Dec. 10 how the CCP has been able to exert influence in Australian society and how Australians can resist such infiltration. The panel discussion, hosted by the Australian Values Alliance, attracted a full house at the City Tattersalls Club in downtown Sydney.

Ethics professor Clive Hamilton, a public intellectual and author of Silent Invasion: China’s Influence in Australia, said the CCP targets individuals, not groups. In his book published in February, Hamilton identified several individuals in Australia who he alleges are subject to the CCP’s influence operations.

“Influence operations do not happen through institutions, they happen through individuals,” Hamilton said on the panel. “It is individuals who are targeted by the CCP through their United Front activities and there are manuals, which cadres are taught from about how to gain the upper hand over an individual and make him or her your friend.”

“It turns out that people are extremely prone to these influence operations,” Hamilton added. “One of the things that was such a disappointment to me … is just how easy it is to buy people off.

“It is very, very easy to buy people whether they are politicians, academics, [or] business people. You actually do not need much. You do not necessarily need to buy them off with money, it can be flattery.”

Associate professor in China Studies Dr. Feng Chongyi at the University of Technology, Sydney said Australian leaders oftentimes underestimate their ability to confront the CCP on a range of issues.

“The Australian and New Zealand politicians, in particular, tend to downplay the strength of their countries and exaggerate the strengths of the Chinese regime, [thinking that] ‘they are very powerful, if we confront they will destroy us, we do not have the power to confront them,’” he said.

“The CCP regime rely very much on the resources of Australia for survival and economic development. They rely on support by democracies around the world for their survival, not the other way around.”

‘Kill the Chicken to Scare the Monkey’

The Chinese idiom “kill the chicken to scare the monkey,” which means to punish individuals and make them an example for others, prompted discussions among the panelists about how the CCP stamps out unwanted attention to contentious topics about China by using the same approach.

Hamilton noted the recent harassment incidents targeting New Zealand academic Anne-Marie Brady, whose home and office were burgled. Many, including Brady herself, believe the acts are a form of retaliation from the CCP for her critical research on China’s politics.

Hamilton mentioned how he himself became a target after the publication of his book.

“Uninvited heavy duty security people started to turn up in my office and [gave] me counter surveillance advice, and my building at the university went into lockdown mode, which it is still in because of strange people coming in and out,” he told the audience. “I was outraged … How dare [they] come and try to intimidate me into silence?”

Read More
Wake Up to Chinese State Infiltration: A Review of ‘Silent Invasion’ by Clive Hamilton

Hamilton also noted how the CCP has repeatedly labelled him as anti-Chinese, xenophobic, and “deliberately confusing the CCP with China and the Chinese people” as a way to silence public discussion on the CCP’s influence in Australia.

“The CCP, in a way, has to do that because it’s the only way it can gain legitimacy it has to keep constantly reiterating the point that the party represents the people,” he said. “Of course Chinese influence in Australia is welcome. What isn’t welcome is Chinese Communist Party’s influence in Australia.”

“What really disturbs me is the way in which many Australian commentators have echoed communist party propaganda … to essentially exploit the history of anti-Chinese racism in Australia, as a way of trying to silence people like me, I think is really extremely dangerous.

Former head of China analysis for Australia’s Defence Intelligence Organization, Dr. Paul Monk, said the CCP actively discourages any criticism of it around the world.

“If we think there’s something strange or objectionable or ominous happening in a Western democracy, we talk about it, write about it, uninhibitedly,” he said, noting the same does not apply to a communist regime such as the CCP. “The party is intent not only maintaining its governance in China but in trying to discourage criticism of it outside China.”

Former Miss World Canada and human rights advocate Anastasia Lin told the panel how she was labelled “persona non-grata” (a person who is not welcome) by the CCP in 2015 because she had spoken out about its widespread human rights abuses. She also recounted how, on many occasions, debates or talks that had been arranged for her to attend would be cancelled. This included one recent cancellation of a live program “The World” by the Australian Broadcasting Corporation in June this year.

Lin described the incident as disillusioning.

“Definitely the Chinese Consulate called them … It happened in Australia, which I often felt like a Western country for the Chinese people is supposed to be safe, and you’re supposed to believe in democracy,” she said. “My voice, my freedom of speech is the only way I have to protect my family in China.”

In continuing her work in human rights advocacy, Lin said she draws inspiration from victims of China’s human rights abuses whom she interviewed for her film.

“No matter how much torture they have endured, or how many threats their family have received, they kept the dignity of what I see as a true Chinese person—like bamboo that will not waver in the storm. It’s [so] flexible that [it] will never get bent or damaged,” she said. “That’s what kept me going.”

Monk said Australia has largely benefited from its relationship with China over the past 20 years. However, people need to be alert to what he calls the “insidious” side of China’s influence operations.

“There are large sums of people who think this is an important relationship to Australia—indeed it is. You can see this kind of rising tide and the boats of those who are actually up to no good are only a small number of boats among the whole flotilla that are sailing along quite happily. That’s the context we’re operating in. The insidious side is therefore largely invisible.”

“We’re now in this curious borderline condition where people are starting to feel uneasy because more and more of what has been happening in the news that’s actually rather insidious is starting to filter out,” Monk said.

Read More
Australia Should Do More To Combat $2.3 Billion Illegal Human Organ Trade: Report
Confucius Institutes Under Review in NSW—Here Are The Concerns

Panel Q&A: Is there Freedom of Speech in the Australia-China Discussion?