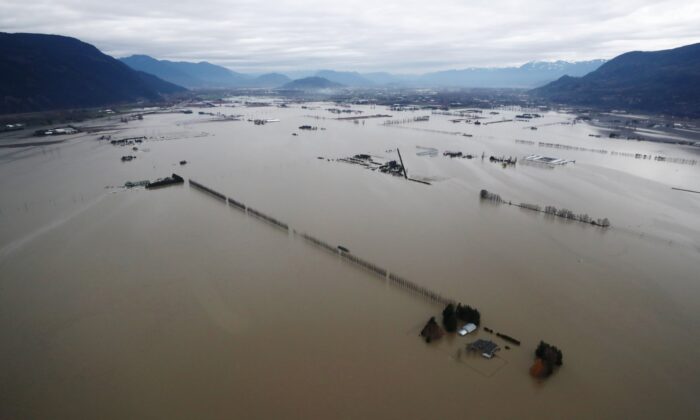 Flooded farms in Sumas Prairie are seen in this aerial photo in Abbotsford, B.C., on Nov. 22, 2021. (The Canadian Press/Darryl Dyck)
Canada

The B.C. government is urging residents to stay vigilant as more storms are expected to hit the province’s south coast, including the hard-hit Fraser Valley in the coming days.

“We are expecting another rain event this Wednesday through Friday, and a series of further storms are expected in the coming weeks,” said Public Safety Minister Mike Farnworth in a press conference on Nov. 22, encouraging British Columbians to keep abreast of weather warnings and alerts.

Environment and Climate Change Canada (ECCC) have forecasted two more atmospheric rivers expected to arrive on the south coast on Nov. 25 and Nov. 27, as part of a “parade of storms” approaching the province into the winter.

An atmospheric river is a long, narrow band in the atmosphere that carries water vapour, like a river in the sky, often releasing this vapour as rain or snow when the river makes landfall.

“We’re not looking at necessarily the same copious amounts as we saw two weekends ago, but we are looking at a very strong signal throughout the weekend, and through next week we continue to have active storms.”

Castellan said the forecasted atmospheric river on Nov. 25 will tap into subtropical moisture and heat, bringing in both rain and water from snowmelt in the mountains to the already flooded areas.

“It’s going to bring freezing levels up to perhaps 2,500 metres, so fairly high, there would be some snowmelt with this moisture,” he said.

Farnworth said while the challenges continue to confront the province, it has made significant progress in its recovery work so far.

“The Sumas dike breach has been patched, the Barrowtown pump station is once again moving water into the Fraser River, and vital connections between the Lower Mainland and the rest of the province are starting to reopen,” he said in the Nov. 22 press conference.

As of Nov. 23, the province has reopened Highway 3 near Manning Park for goods movement and people travelling for essential purposes following a geotechnical assessment that deemed it safe. The highway was closed on Nov. 22 after pavement cracking about 10 kilometres east of Manning Park Lodge was observed.

The province has also opened the eastbound lanes on Highway 1 between Highway 11 east to Cole Road for emergency access to agricultural relief as floodwaters in the Abbotsford area continue to recede. Highway 1 between Boothroyd and Hope was opened on Nov. 21, helping connect several communities to the Lower Mainland.

Farnworth stressed that non-essential travel restrictions remain in place for hard-hit sections of Highway 3, Highway 7 and Highway 99, and the restrictions have been expanded to cover parts of Highway 1 in Abbotsford’s Sumas area.

“Our focus is on keeping the roads clear for agricultural vehicles in the Fraser Valley, and I urge everyone to do their part and stay off roads if you can,” he said.

B.C. Transport Minister Rob Fleming assured that supply chains are getting back on track with goods and services moving again.

“As we reactivate the supply chains we continue to work closely with other levels of government as well as many companies and organisations,” he said in the press conference.

Fleming added that Canadian Pacific Railway is “cautiously optimistic” in restarting its operations on Nov. 23 barring any unforeseen events.

“They are making tremendous progress on repairing track that will connect us right through to the Alberta border and with the rest of Canada. This would be a very important and welcome development for goods movement for our country,” he said.

CP Rail has also said it is planning to reopen its railway between Kamloops and Vancouver on Nov. 23.

Meanwhile, the city of Merritt announced the first phase of its three-step return home plan which will take effect as of Nov. 23 noon, after the entire city was forced to evacuate when the Coldwater River flooded into the community of about 7,000 a week ago.