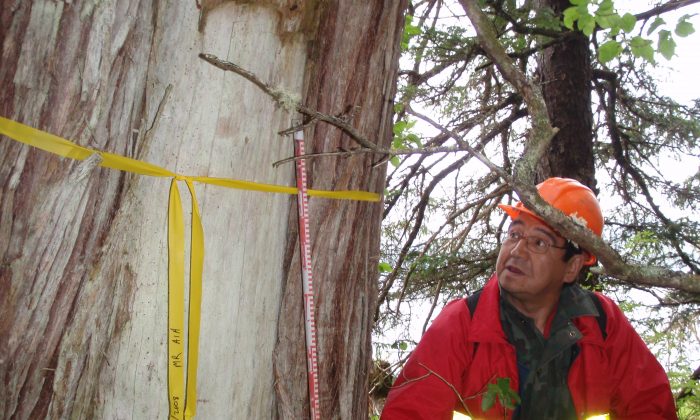 A Heiltsuk forestry worker holds a scale beside a rectangular bark-strip on a culturally modified tree near Doc Creek, B.C. The Heiltsuk Nation is part of a project that will improve the understanding and management of CMTs, an important pre- and post-contact heritage feature on B.C.'s Pacific Coast. (Courtesy of Morley Eldridge)
Canada

Culturally modified trees in British Columbia’s renowned Great Bear Rainforest will be better protected thanks to a new project that aims to improve the understanding and management of the trees.

Culturally modified trees (CMTs) are trees that have been altered by First Nations people as part of their traditional use of the forest, with some dating back to pre-contact times. Trees altered before 1846 are already protected under the B.C. Heritage Conservation Act and are not allowed to be logged.

The work will take place in the traditional territory of the Heiltsuk Nation, which includes much of the area known as the Great Bear Rainforest.

The Heiltsuk have partnered with Interfor—one of the Pacific Northwest’s largest producers of wood products—on the project, which is funded with a conservation grant from Sustainable Forestry Initiative.

“Culturally modified trees preserve a partial but compelling record of Heiltsuk presence on the land and utilization of forest resources, and are an integral part of our culture and heritage,” says Jennifer Carpenter, Culture & Heritage manager for the Heiltsuk Nation.

“Detailed analysis of CMT types and locations helps us track and monitor these and other archeological features so they can be protected.”

CMTs usually have a wide variety of features, including scars where planks or bark have been removed.

Planks were also cut from the trees to make canoes, shelters, and other wooden necessities. Some of the bark was always left to allow the tree to live.

In addition to B.C., culturally modified trees can be found in parts of the United States, Scandinavia, and Australia. Features on Australian CMTs include toe-holds to facilitate tree climbing, as well as smoke- and access-holes to catch wildlife such as possums and birds.

According to “Text in Trees,” a 2006 academic paper, CMTs are recognized as unique archaeological features in that in many cases, they can be very precisely dated through dendrochronology, or tree-ring dating.

“They are history written on the landscape,” the authors wrote.

It was only around the beginning of the 1980s that scientists began recognizing that the trees are important sources for the history of certain regions. In fact, they are such a mine of information that they have been designated CMT archives.

The logging of old-growth forests has put CMTs in jeopardy, however, and some First Nations have registered the trees on their traditional lands in an effort to protect them. Protected trees are registered, classified, and, if possible, dated.

Rhiannon Poupard, manager of First Nations & Forestry Partnerships with Interfor, said the project’s database will “help fill in any gaps” and the maps and reports produced by the spatial analysis in GIS will improve the lumber company’s forest management.

“We recognize the unique ties that the Heiltsuk have to their lands and this project will help us to better identify, respect, and manage this unique heritage resource,” she said.

Information gained through the database research will be shared with local First Nations and forest professionals.