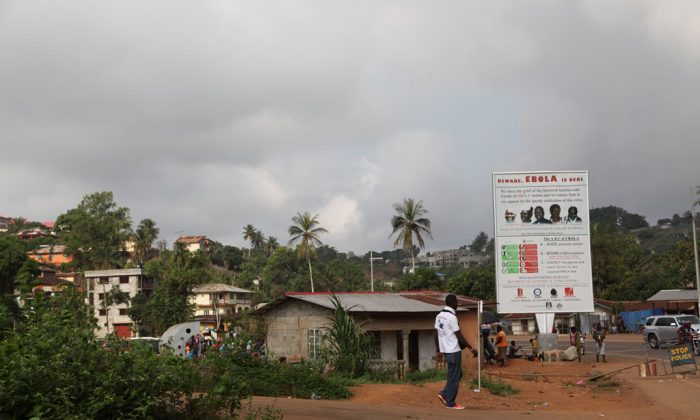 It’s been ten months since the Ebola outbreak in West Africa hit the headlines. And in contrast to Guinea and Liberia where cases have begun slowing down, in Sierra Leone the opposite is true. According to the WHO, half the total of nearly 18,000 confirmed Ebola cases are to be found in Sierra Leone. The situation in the capital Freetown is of great concern, as the ebb and flow of people is only fuelling the spread of the deadly virus.

The UK is leading the response to the outbreak in its former colony, where a ‘lockdown’ in Freetown is underway over the Christmas period to try and bring contagion under control. Government officials have been going house-to-house in a bid to find the sick and get them to hospital. They are using shock tactics to send out a tough and clear message to the people: Ebola is real, it kills and the best chance of survival is getting to hospital as quickly as possible.

Sarah Wilson from World Vision International’s Ebola emergency response team has just returned from the field. Epoch Times caught up with her to talk about the knock-on effects the Ebola outbreak is having on the more remote communities in the country.

Epoch Times: Sarah, you’ve just returned from Bonthe Island, which is remote and difficult to get to and where the people rely on trade with the mainland to survive. What’s the situation there?
Sarah Wilson (SW): Bonthe Island has been cut off for more than four months and many are now in need of emergency food rations. Since the Ebola outbreak, the people haven’t been able to trade with the mainland because boats are not allowed to and from the island, and they’ve been surviving with what they can get their hands on. This means that although there have been very few cases of Ebola, people are beginning to show early signs of malnutrition.

Epoch Times:  How do you get to the island if you can’t go by boat?
SW: We had to take a helicopter over with the World Food Programme (WFP), which is in charge of food distribution to the communities on the island. World Vision is helping out with the food rations.

Epoch Times:  What did you find when you got there?
SW: We saw many children clearly displaying signs of hunger and malnutrition. One chief said to me, ‘Ebola is our hunger,’ and all the people we met are very grateful for any outside help.

It’s a slow process getting the food to these remote islands. It has to be flown in by WFP helicopters that drop it on the beach where community members collect it and take it to public buildings. It’s usually stored in schools, but all of them are closed because of Ebola. When people are registered – which takes more time – the food is distributed. It may seem like a long process, but the only way to do it faster is to hire more staff. And that in turn, costs money.

Some of the people we met had just received a month’s worth of rice, fortified cereal, cooking oil and yellow split peas – so they were coping much better as they’re beginning to get the nutrients they need. There were others though, who’ll have to wait until the New Year to get rations.

Epoch Times: Clearly much more needs to be done and very fast. What are the most immediate needs?
SW: We don’t have enough staff. Many more doctors and nurses are urgently needed. There weren’t nearly enough medical personnel before this outbreak, and that situation has only deteriorated further with dramatically increased demands. Many key health care workers have already died, which is exacerbating the problem.

I think there is a disproportionate fear in the UK and other countries which must be counteracted with accurate knowledge of the way Ebola is transmitted.

Epoch Times:  World Vision has been active in many other areas too, including in Moyamba District where British Army engineers have opened a treatment centre and where a British doctor, Professor John Wright is in charge.
SW: Yes that’s right. We’ve been operating the Command and Control Centre linked to the hospital for about six weeks, and the district has now been re-classified as medium rather than high risk. World Vision is now in charge of the ambulances carrying patients to and from the centre.

There is also a secure area to park the vehicles and where they can be decontaminated after every burial. And this is done rigorously. The families of the deceased can invite a local pastor or imam to perform a ceremony either at the house or the graveside with mourners standing a safe distance of 15 metres away. It’s important at a time when raw human emotions take over that safety remains of paramount concern.

Epoch Times: Did you see any signs that things are getting better?
SW: I’d say the main thing that has improved since World Vision took over training the burial teams, is the speed at which they operate. Without outside help, the NERC (National Ebola Response Centre – set up by the government) was not able to pay the teams regularly. There weren’t enough vehicles, repair facilities or fuel to keep them on the road. Now the burial teams are paid $100 (£65) a week, for what is a dangerous job. The bodies of people who have died of Ebola are the most infectious of all. These people are often shunned by their communities.

This ‘dignity’ element has encouraged communities to call the burial teams. All deaths that are not from accidents or other causes that are obviously not related to Ebola are now being buried in this way. Swabs are taken by the burial teams and only about 10 percent are positive.

Epoch Times:  You also spent time in Freetown, where there are fears Ebola is out of control and where a ‘lockdown’ has been imposed to try and bring transmission rates down. How does a ‘surge’ or ‘lockdown’ work?
SW: The government has decided to use scaremongering tactics to try and get people to change their behaviour as nothing has really worked so far. All New Year’s Eve festivities, including church services and New Year’s Day outings are prohibited this year. Any church wishing to hold a New Year’s Eve service, has to make sure it ends before 5 p.m. on Wednesday December 31st or do it via radio or television broadcast. No public gatherings are allowed, and this includes all public activities around restaurants, nightclubs and the beach areas in the Western Area. Not only that, but traders and market women are only allowed to trade from 6 a.m. to 6 p.m. Mondays to Fridays and from 6 a.m. to 12 p.m. on Saturdays. Trading on Sunday is totally suspended until further notice.

Everyone has to abide by these measures and anyone who doesn’t will be penalised. So it’s pretty tough, but totally necessary.

Epoch Times:  Orphans are a big problem now, so what is happening to them, Sarah?
SW: In some cases, survivors are volunteering to look after them while they’re in quarantine. We now know that survivors are immune for ten years. Most are being taken in by their community, although this has not been easy as there is still a lot of stigma surrounding Ebola. We hope to have a concrete plan in place shortly to deal with the children who are left behind.

But, the fact that adequately resourced and staffed treatment centres are now coming on stream is helping to overcome community fears, particularly as they are beginning to achieve 50 percent survival rates, and better.

Some people say they believe the disease will be contained by the end of January – at least in the rural areas, although Freetown may take longer.

Epoch Times:  What are the main challenges?
SW: The main obstacle that needs to be overcome is fear. Not just here in Sierra Leone, but in the rest of the world. The disease is often fatal, but if you receive robust treatment in the early stages, you have a good chance of survival. The risk to international health workers and other support staff is low if they follow the protocols. But it is a blanket fear based on misinformation that has drastically and catastrophically slowed the response.

Other emergencies that I have worked in have been caused by either natural disasters or conflict. In the case of natural disasters, the earthquake or tsunami has already occurred by the time relief arrives. In conflict, the people being helped are refugees or IDPs (internally displaced people), far away from the conflict zone. So in both cases the disaster itself is not on-going. With Ebola, it is all around you.

The other problem is that so many people seem to think that the virus is much more contagious than it is. So I have been experiencing stigma on a personal basis. It is very similar to how people viewed HIV in the late 1980s when it first became widespread in New York. I remember it well.

Epoch Times: Personally, how are you feeling about what you’ve seen and is there room for optimism looking forward to 2015?
SW: I think there are reasons to be hopeful that the outbreak will be contained over the next few months. But the battle is far from over.