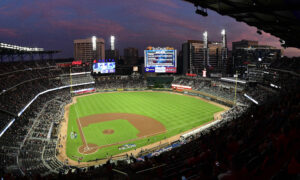 A baseball with MLB logo is seen at Citizens Bank Park before a game between the Washington Nationals and Philadelphia Phillies in Philadelphia, Pa., on June 28, 2018. (Mitchell Leff/Getty Images)
Viewpoints

If the new law really disenfranchises African Americans, as Joe Biden and other progressive activists claim, then that disenfranchisement will not be addressed by these efforts, which will mostly hurt the business community of a city often referred to as Black Mecca. In reality, the pressure campaign has nothing to do with race—it’s just another Democratic Party information operation, this time laying the groundwork to defraud American voters in 2024, too.

Biden is mad about the Georgia law because it’s personal. Absentee voters will now have to provide identification with their votes by mail, a requirement that, had it been implemented in 2020, might have cost him the state. Before Donald Trump was president, mail-in-voting was understood by both parties to be a recipe for voter fraud. But in 2020, Democratic Party operatives saw it as their cognitively impaired candidate’s best shot at winning. They pushed for a massive mail-in vote in order to create chaos and, in particular, overwhelm a few key districts in swing states.

Given the sheer volume of mail-in votes, it would be impossible to contest all the illegal and illegitimate ballots in the two months between the election and Congress’s certification of the election. In other words, Democratic activists used COVID-19 to legitimize voter fraud, which pushed Biden over the top. Accordingly, Biden characterized the new law as “Jim Crow in the 21st century” and threatened to send the Department of Justice against Georgia Republicans.

Behind Biden is a large, well-funded movement, spearheaded by organizations like the Service Employees International Union (SEIU). The SEIU’s pension fund representatives pressured executives at Delta and Coca-Cola—both headquartered in Atlanta—to attack the legislation, with the result that two of the city’s most prominent employers linked up with an operation to cancel an event that would have brought Atlanta an estimated $100 million.

By conceding to activists, MLB commissioner Rob Manfred exposed the league’s 30 owners—who reportedly were blindsided by his decision to move the all-star game—to blackmail. If MLB folded that easily, there is nothing to stop progressive operatives from targeting individual franchises. Former league commissioner Fay Vincent warned Manfred not to make baseball “a weapon in the culture wars” and “a hostage for one political party or ideology.” But it’s probably unfair to lay all the blame on the current MLB head.

Since Jackie Robinson broke the color barrier in 1947, baseball has been seen—often rightly—as a vehicle for social change. At present, however, the league’s self-image is at odds with reality. When MLB opened its COVID-shortened season last year, it paid homage to Black Lives Matter (BLM). But by stamping BLM slogans and imagery on big-league fields across the country, it promoted a violent movement that, during the nationwide spring and summer riots, laid waste to the small-business base of cities that host MLB franchises. Black- and other minority-owned businesses were among those hardest hit in Minneapolis, for instance, home of the Minnesota Twins.

Democrats know that playing the race card gets Manfred’s attention; the league’s performative progressivism can’t hide its genuine minority problem. For decades, baseball executives have lamented that their industry is losing top black athletes to basketball and football. What the wise men of baseball leave out is that, by exploiting cheap and sometimes underage Latin American immigrant labor to fill their minor league rosters, they have incentivized African American talent to look elsewhere. If baseball paid U.S.-born minor leaguers a fair wage, more black teenagers would choose baseball over a basketball or football scholarship.

In the meantime, the league’s hypocrisy will continue to leave it as prey to activists, including the baseball press, whose primary role now—like the rest of the media—is to enforce progressive orthodoxy. Last year, retired ace pitcher Curt Schilling asked to be left off the writers’ ballot for the Hall of Fame, explaining that the media have used his candidacy to trash him for his conservative political views. And that’s partly what’s keeping current stars silent, despite the fact that they, too—thanks to Manfred’s buckling—are now likely to be targeted by activists.

The ballplayers are hoping it’s safer to keep their heads down—rather than take a proactive position on keeping baseball out of politics—because they’re scared of getting the Schilling treatment. Otherwise, a work stoppage from any one of a handful of stars who could potentially cost the league millions of dollars might persuade Manfred to stand firm. As it is, the commissioner’s decision has put baseball in the middle of the 2024 election cycle.

Georgia Gov. Brian Kemp said it “doesn’t make a whole lot of sense” that MLB decided to move the game to Colorado. And it’s true that both states require absentee voters to provide ID. But the real point of the campaign was not really to punish Atlanta, never mind promote Denver, but rather to protect what Democrats consider strategic territory. The 2020 outcome was decided in the large urban districts of several swing states, where there was ample evidence of voting irregularities: Philadelphia, Detroit, Milwaukee, and, of course, Atlanta. Georgia’s new law may not stop Fulton County election officials from once again halting vote counting in the middle of the evening, but it gives Republicans grounds for contesting illegal ballots.

And that’s the purpose of the Democrats’ pressure campaign—to lay the groundwork long in advance to delegitimize any attempts Georgia Republicans might make in the 2024 election season to throw out bad ballots. The Democrats are wagering that they’ll have more luck contesting the vote count in court than the 2020 Trump campaign did—and they’re right.

They have already called America’s pastime to the stand. You don’t have to take just Biden’s word for it—even Major League Baseball, or at least its commissioner, believed that the law was so racist that the commissioner moved its mid-summer classic out of Atlanta.