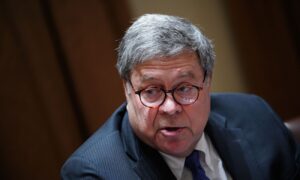 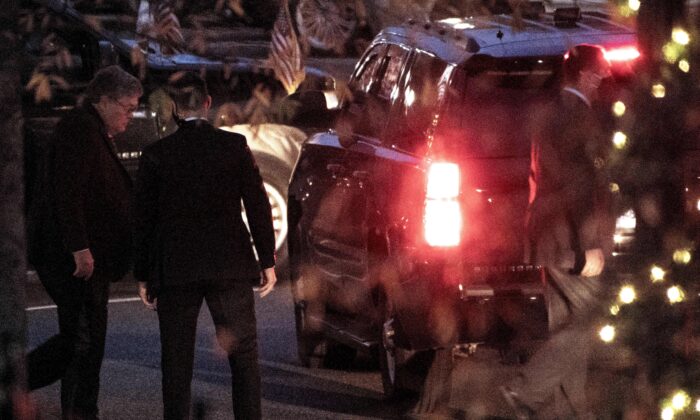 Attorney General William Barr leaves the West Wing of the White House after a meeting on Dec. 1, 2020. (Brendan Smialowski/AFP via Getty Images)
Viewpoints

Attorney General William Barr signaled on Dec. 1 that he’s washed his hands of the president, telling the media that the Department of Justice has found no evidence of fraud that would change the election results in favor of Donald Trump.

U.S. officials I spoke with don’t understand Barr’s motivation for speaking to a press corps typically hostile to him as well as Trump.

“There’s no evidence that the DOJ spoke with any of the numerous witnesses with first-hand knowledge of election fraud,” said one senior official. “And many people reached out directly to the FBI and got no response back.”

The effect of Barr’s statement is to derail the Trump campaign’s efforts to reverse the vote in battleground states contested by the president’s legal team. It’s difficult to imagine state legislatures or courts taking up the campaign’s cause when the headlines show that Trump’s own attorney general says nothing is wrong.

By distancing himself from the president’s political fortunes, Barr gave his bona fides as an honest broker in order to resolve the issue that most matters to him—salvaging the reputation of the institution he’s led twice, the Justice Department. He revealed on Dec. 1 that he’d appointed John Durham as special counsel to continue his nearly two-year-long probe into the origins of Crossfire Hurricane, the FBI’s discredited investigation of the 2016 Trump campaign.

According to Barr, the scope of the investigation he asked the U.S. attorney from Connecticut to lead in May 2019 has “narrowed considerably.” At first, it seemed sprawling. The two men reportedly traveled to Italy and contacted officials in the United Kingdom and Australia to gather information on foreign nationals allegedly involved in Crossfire Hurricane. In August, Durham interviewed former CIA Director John Brennan for eight hours. In September, the prosecutor reportedly sought information on the FBI’s investigation of the Clinton Foundation.

Republican officials reasoned that it was precisely because the investigation was so large and thorough that it was taking Durham so much time to deliver indictments. Reports claimed that he kept finding new evidence, was following more leads. On Dec. 1, Barr said Durham’s work now “really is focused on the activities of the Crossfire Hurricane investigation within the FBI.”

Perhaps Barr believes that limiting the investigation’s scope will convince a Biden White House that it doesn’t threaten his administration. After all, a thorough investigation would have to look at Biden’s pick for national security adviser, Jake Sullivan. What did the former Hillary Clinton campaign advisor know about the FBI’s role in the anti-Trump operation when he was briefing the press on “collusion” and tweeting out stories sourced to Clinton contractor and FBI source Christopher Steele? What did John Kerry, Biden’s choice for climate envoy, do with Steele’s Trump-Russia reports when they were passed to him as secretary of state? And why did then-Vice President Biden direct the FBI to look at Trump’s national security adviser Michael Flynn for violating the Logan Act?

There’s nothing to stop Biden from dismissing Durham. Trump reportedly considered firing Robert Mueller at least twice. But the president’s legal team defended the probity of the coup targeting their client.

“I would never have anything to do with any attempts to attack Bob Mueller’s integrity,” said the former spokesman for the White House’s legal team, Mark Corallo. In other words, the aides hired to defend Trump were less concerned with the stability of the U.S. government than the prospect that their reputations would be trashed in the press.

A Biden administration will be lauded by the media for disarming a weapon dangerous to “democracy” if—when—Durham is fired, and any charges made are withdrawn. But the only Americans likely to be shocked by a coverup of that magnitude are Trump voters. And they are no longer capable of being shocked by the corruption of the Democratic Party and its media partners after watching, for example, the press bury news of the Biden family’s financial ties to a Chinese regime responsible for a pandemic that left hundreds of thousands of Americans dead and tens of millions unemployed.

It’s not clear why Durham can make a case now that he wasn’t able to make in a year and a half. He was rumored to be concerned that bringing charges or releasing a report too close to the election would look like a political hit job, and the investigation, conducted by a career prosecutor proud of his reputation as a “straight-shooter,” had to be above reproach. Only self-regard blinded him to the irony—his discretion left the rule of law liable to the outcome of a political contest.

The subject of his investigation—corruption at the highest levels of government—was all the evidence he needed that its integrity would depend entirely on a Trump victory.

Failing to bring charges, or even filing a report, for interfering in the 2016 election was an invitation to interfere in the 2020 race. If no one was held accountable for what they did four years ago, there was little risk this time out. And now, Barr speaks out to downplay the Trump campaign’s claims of election fraud when it is precisely because of the actions and decisions taken by the institution he cherishes that half of America has lost its faith in the justice system as well as the electoral process.

On such things much smaller than war hang the fate of nations.