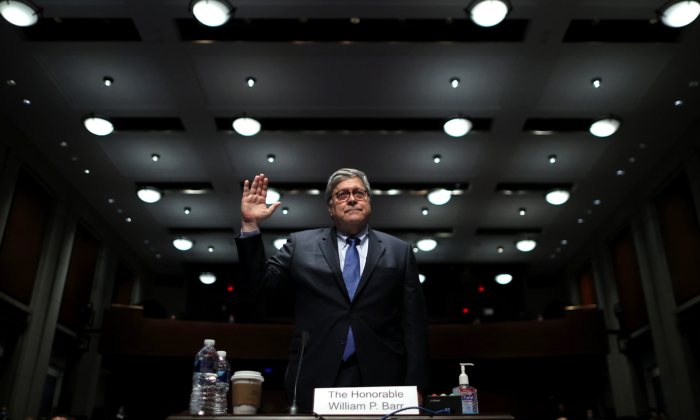 Attorney General William Barr takes the oath before he testifies before the House Judiciary Committee hearing in the Congressional Auditorium at the US Capitol Visitors Center July 28, 2020, in Washington. (Chip Somodevilla/AFP via Getty Images)
Politics

Attorney General William Barr defended the actions of federal law enforcement and some of his own decisions as he faced hours of questions, criticism, and accusations from Democrats on the House Judiciary Committee on July 28.

In Barr’s first appearance before the panel since President Donald Trump appointed him to lead the Department of Justice (DOJ), the Democrats focused significant attention on the role of federal agents in quelling riots that have plagued Portland, Oregon, and other cities. They also questioned Barr’s decisions in prosecutions involving former Trump advisers Michael Flynn and Roger Stone.

The Democrats frequently interrupted Barr’s responses to their questions and accusations, as Republicans yielded some of their own time to allow the attorney general to respond. Barr raised his voice on a few occasions to attempt to get a word in, but remained composed and calm as Democrats lobbed insults and what appeared to be poorly substantiated insinuations.

“In the hands of President Trump, a Department of Justice that adopts a dangerously expansive view of executive power and demonstrates a willingness to shield him from accountability represents a direct threat to the country,” committee Chairman Jerry Nadler (D-N.Y.) alleged in his opening statement.

“This administration has twisted the Department of Justice into a shadow of its former self, capable of serving most Americans only after it has served those in power.”

Barr devoted roughly half of his opening statement to addressing the national conversation about the police-custody death of George Floyd. The attorney general stressed that defunding the police is a poor approach to solving the problem.

“The threat to black lives posed by crime on the streets is massively greater than any threat posed by police misconduct,” Barr said. “The leading cause of death for young black males is homicide. Every year, approximately 7,500 black Americans are victims of homicide, and the vast majority of them—around 90 percent—are killed by other blacks, mainly by gunfire. Each of those lives matter.”

Barr noted that the demonization of law enforcement has led to risk avoidance by police officers, which has, in turn, triggered a spike in crime in cities across the nation. The DOJ has deployed investigators, firearms and ballistics analysts, and other experts to these hotspots to counter the surge, he said.

“And it is not just that crime snuffs out lives. Crime snuffs out opportunity,” Barr said. “Children cannot thrive in playgrounds and schools dominated by gangs and drug pushers. Businesses do not locate in unsafe neighborhoods. When the police are attacked, when they are defunded, when they are driven out of urban communities, it is black lives that will suffer most from their absence.”

The killing of George Floyd triggered a wave of violent riots across the nation, and Democratic committee members repeatedly conflated the federal response to the violence from agitators as being targeted at peaceful protests. Barr vehemently defended the conduct of the federal agents and drew a distinction between the peaceful protesters, whom he supports, and the violent radicals.

Even as the wave of riots across the nation has subsided, Portland has remained plagued by a nightly cycle of violence. The DOJ said that 22 people were arrested over the weekend, including 16 who face charges of assaulting federal agents. The rioters have focused their attention on a federal courthouse, forcing the federal agents tasked with protecting the facility to respond.

“What unfolds nightly around the courthouse cannot reasonably be called a protest; it is, by any objective measure, an assault on the government of the United States,” Barr said. “A number of federal officers have been injured, including one severely burned by a mortar-style firework and three who have suffered serious eye injuries and may be permanently blind.”

Barr also defended his handling of the case against Stone, in which he personally intervened to propose a more lenient sentence. The sentencing was brought to his attention because the four line prosecutors threatened to resign if they weren’t allowed to suggest a tougher sentence to the court, which Barr did not agree with. The judge in the case ultimately sided with Barr’s pleading.

The attorney general also explained the DOJ motion to dismiss the case against Flynn, telling lawmakers that the FBI had no basis to investigate the former director of the Defense Intelligence Agency.