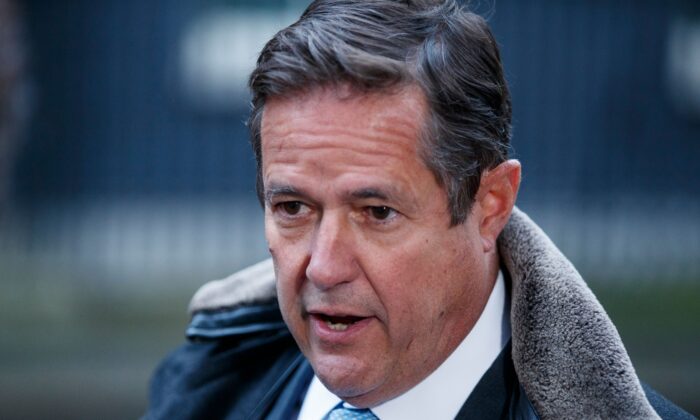 Jes Staley, CEO of Barclays, arrives at Downing Street for a meeting in London on Jan. 11, 2018. (Tolga Akmen/AFP via Getty Images)
Companies

Barclays CEO Resigns Over Probe Into Ties to Jeffrey Epstein

Barclays Chief Executive Jes Staley is stepping down from his role as head of the multinational banking group after British regulators announced preliminary conclusions of a probe into his ties to convicted sex offender and disgraced financier Jeffrey Epstein.

In a Nov. 1 statement, Barclays said it was made aware on Oct. 29 of initial findings of the investigation by Britain’s Financial Conduct Authority (FCA) and the Prudential Regulatory Authority (PRA) into Staley’s characterization to Barclays of his relationship with Epstein and the subsequent description of that relationship in Barclays’ response to the regulators.

Barclays stated that Staley was stepping down, as he intends to contest the conclusions of the probe, which “makes no findings that Mr. Staley saw, or was aware of, any of Mr. Epstein’s alleged crimes, which was the central question underpinning Barclays’ support for Mr. Staley following the arrest of Mr. Epstein in the summer of 2019,” according to the bank.

“In view of those conclusions, and Mr. Staley’s intention to contest them, the Board and Mr. Staley have agreed that he will step down from his role as Group Chief Executive and as a director of Barclays,” the statement reads. “The board is disappointed at this outcome. Mr. Staley has run the Barclays Group successfully since December 2015 with real commitment and skill.”

The investigations sought to examine Staley’s “historical” links to Epstein while Staley ran the private banking arm of U.S. investment bank JP Morgan, according to Sky News. Barclays said in February 2020 that Staley had offered an account of his business relationship with Epstein, and the bank’s board determined that Staley had been “sufficiently transparent” in describing his links to the deceased convicted sex offender, according to the media outlet.

While no details are available on the findings of the FCA and PRA probes, it appears that the agencies “believe there was a distinct lack of transparency over this relationship,” said Susannah Streeter, senior investment and markets analyst at Hargreaves Lansdown, according to The Guardian.

The FCA and PRA issued a joint statement on Nov. 1, stating that they “do not comment on ongoing investigations or regulatory proceedings beyond confirming the regulatory actions as detailed in the firm’s announcement.”

Epstein was found dead in a New York federal jail on Aug. 10, 2019, while awaiting trial on sex trafficking charges. His death was ruled a suicide by hanging.

“The repercussions from the Jeffrey Epstein scandal stretch far and wide, and now Barclays finds itself at the center of the storm,” Streeter told The Guardian. “It’s understood Mr. Staley will contest the conclusions, and clearly the board wants to distance Barclays from what could be a long, drawn-out process.”

A number of high-profile individuals, including Bill Gates and Prince Andrew, have faced scrutiny over their ties to Epstein or his victims.

Gates told CNN in August that he had “several dinners” with Epstein about 10 years ago, saying that it was a “huge mistake” to meet with the convicted sex offender.

“It was a huge mistake to spend time with him, to give him the credibility of, you know, being there. There were lots of others in that same situation, but I made a mistake,” Gates said.

One of Epstein’s longtime accusers filed a lawsuit against Prince Andrew in August, alleging that she was sexually assaulted by him on three separate occasions when she was 17.

Prince Andrew has denied the allegations.