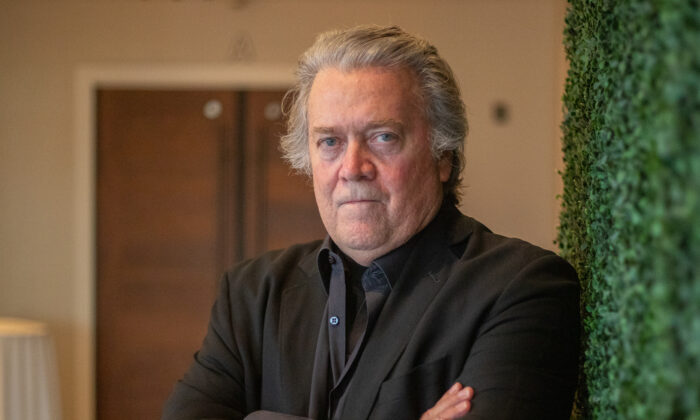 Bannon: ‘I’ll Never Back Down. They’ll Have to Kill Me First’

Steve Bannon, an ex-advisor to former President Donald Trump and host of the popular War Room Pandemic podcast, said turning himself in to face money laundering and conspiracy charges, was “one of the most powerful days of my life” despite the national spectacle of being led in handcuffs to his arraignment on Sept. 8.

“I don’t care about any of this stuff,” Bannon told The Epoch Times in a backstage interview at a Sept. 18 fundraiser in Orange County, Calif. “They’re trying to shut down War Room, and they’re trying to shut me up, and that will never happen. The show gets bigger, I get a bigger platform, and I’ll never back down. They’ll have to kill me first.”

Despite memes on social media depicting him surrounded by prison walls and pundits who either neglectfully or skillfully omit the word “alleged” in their commentaries about the case, Bannon is undaunted. He scoffed at the indictment, calling it “a joke.”

Quoting Revolutionary War-era U.S. naval commander John Paul Jones at his arraignment, he said: “I have not yet begun to fight.”

At the fundraiser for Republican Mark Finchem, a candidate for secretary of state in Arizona, held in Huntington Beach, Calif., Bannon delivered a fiery speech similar to one he gave at a Turning Point USA event two days earlier.

Backstage, he accused the Biden administration of weaponizing the criminal justice system to target its political foes. Citing the latest midterm election polls, Bannon said Democrats are desperate to build back support by silencing as many Republican voices as they can, especially since other political schemes, such as “the show trial” hearings over the events at the Capitol Building on Jan. 6, 2021, and the FBI’s “raid and ransack” of Trump’s home in Mar-a-Lago, have “collapsed.”

“Five days after Biden’s speech they put out this indictment. It’s a Xerox copy of the last one, which is a joke,” Bannon said. “They’re after everybody. Now, they have 75 subpoenas and search warrants, have taken phones, and are doing raids on people’s homes. They’re just doing shotguns. They understand their power has a limit to it on Nov. 8, and they’re in a mad scramble.”

In an online crowdfunding campaign called We Build The Wall, intended to build sections of barriers on the U.S.–Mexico border, Bannon and three others—Brian Kolfage, Andrew Badolato, and Timothy Shea—promised donors that the donated money would go toward the wall but were accused of siphoning off about $1 million of the more than $25 million collected. All four men were indicted on federal charges in August 2020. Kolfage and Badolato pleaded guilty.

The Biden administration is “furious” because “we actually built a wall in two places—particularly two impossible places,” according to Bannon.

“Anybody that sets out to try to build a wall or get our sovereignty, they’re going to try to destroy,” he said.

Still, Bannon sees the indictment filed by New York Attorney General Letitia James, a well-known progressive Democrat, as a politically motivated attack against him and other Trump supporters just 60 days before an election.

While Republican establishment candidates in California have distanced themselves from Trump, some suggesting that he’s “toxic” to their campaigns, Bannon urged supporters of the Make America Great Again (MAGA) movement to take a harder stance on important issues.

“Throughout the country, there are a lot of establishment politicians that run in fear from Trump. They want to cuddle up enough to get his voters,” he said. “The MAGA people in California have to stand up—and Republicans—because looking away didn’t work.”

With his eyes possibly fixed on the presidency in 2024, California Gov. Gavin Newsom is already pitching a progressive model for the nation, according to Bannon.

If Republicans can unite to “put lead on the target … the Democratic Party is going to be shattered from school boards all the way up as a national political institution,” he said.

If not, Newsom “will stand like a Goliath over a smoldering hole with $250 million in the bank and a 20 percent win as governor of California,” Bannon said.

Still, if Republicans hope to win back congressional seats, they need to support America First MAGA candidates as well as moderates such as Virginia Gov. Glenn Youngkin, he suggested.

“We have to be practical, and we have to run with a Youngkin where MAGA comes out in great strength, and we team up with the moms that are so enraged about the schools. That’s how we pull it together,” Bannon said.

Although he’s disheartened to see the decline of California and the devastation of the working middle class that built it, Bannon said he plans to spend more time in the once-great state.

“I’ve spent 25 years of my life in California as a naval officer,” he said. “I love this state, and it kills me how it’s been destroyed.”

While many conservatives may see deep-blue California as a lost cause, the MAGA movement can’t ignore a state that has one of the largest and most powerful economies in the world, Bannon said.

Trump may be an “imperfect instrument” of change, but he remains a “blunt force trauma armor-piercing shell” and leader of the MAGA movement, according to Bannon.

The ideological battle over theories on gender and race has led to a culture war similar to those seen in communist nations in the past, Bannon said, but today the battle is happening in the living rooms of the United States between parents and their children.

From the French Revolution to the Bolsheviks, Nazis, and Mao Zedong, communists have known that the greatest threat to their regimes are strong families, he said.

“The communists know they have to break the nuclear family,” Bannon said. “This is nothing more than what the Bolsheviks did and what Mao did: Turn the children against the parents. You make that safe space—the home—an area of conflict.”

“Atheistic communists” know that one way to spark this war at home is to plant seeds of doubt in children’s minds about the essence of their own existence “such that they don’t know who they are or what they are—not even a spiritual being.”

“They don’t even know what sex or gender they are,” he said. “That’s the poison.”

Bannon has applauded the efforts of parents who have resisted the push for transgender activism in K–12 schools, but he said this indoctrination goes well beyond the public education system.

“Look, it’s not my line of country, but I will tell you, it’s such a massive issue that we must put it at the top of the agenda,” he said. “It’s not just the schools. It’s Boston Children’s Hospital; it’s Harvard medical; it’s Yale medical. It’s all the big medical institutions. They’re with Big Pharma and the U.S. government.”

When it comes to “gender-affirming” care for minor children, Bannon said reestablishing parental rights won’t protect every child because some parents will consent to gender transition medical interventions.

“That’s not good enough. There should be none of this until the child is of majority age. When you’re a free man or free woman, you can make decisions for yourself,” he said. “I think it’s a winning issue for us. Ninety percent of the people are against this. They don’t want to see this.”

The illegal immigration crisis at the southern border is by design, Bannon said. As he often tells his fans in the War Room Posse, “there are no conspiracies, but there are no coincidences.”

“In the campaign against [Hillary] Clinton, we said we stand against the managed decline of our country by our elites,” he said. “This is not managed decline. This is off-the-cliff collapse. They want it to collapse because they want to wipe out the middle class.”

Recently, Florida Gov. Ron DeSantis sent a planeload of 50 illegal migrants to Martha’s Vineyard, home of former President Barack Obama and other liberal elites, much to the chagrin of local residents.

While filmmaker Ken Burns is comparing 50 immigrants who were whisked away to a nearby military base “to the Holocaust,” Bannon said hundreds of thousands of illegal migrants have come across Eagle’s Pass, Texas, with thousands more on the way.

The MAGA movement is gaining more ground among Hispanic voters in the Rio Grande Valley.

The World Economic Forum (WEF), the Party of Davos, and the top global banking and financial leaders have known for years about human rights atrocities committed by the Chinese Communist Party (CCP) and yet continue to praise Chinese leader Xi Jinping, according to Bannon.

As “insiders of the insiders,” they know about the persecution of Uyghurs, the underground Catholic Church, evangelical Christians, and Falun Gong, according to Bannon.

“They know about all of it,” he said. “They don’t care, because there’s so much money to be made when the Chinese people are enslaved by a transnational criminal organization which they finance.

Raised Catholic, Bannon isn’t shy about his spirituality or his imperfections.

“I was as spiritual as the next guy. I’m not particularly churchy. I’ve got a mouth like a sailor, and I’ve got three ex-wives. But everybody in this fight understands that there’s a spiritual component. It’s a spiritual war,” he said.

“Because of everybody’s prayers, and also the Holy Spirit, I feel that I’ve dedicated my life to this. I’m not going to back off an inch. Whatever happens, happens. I just know every day I look in the mirror and say, ‘I’m going to leave it all on the battlefield today,’ and the day will take care of itself.”