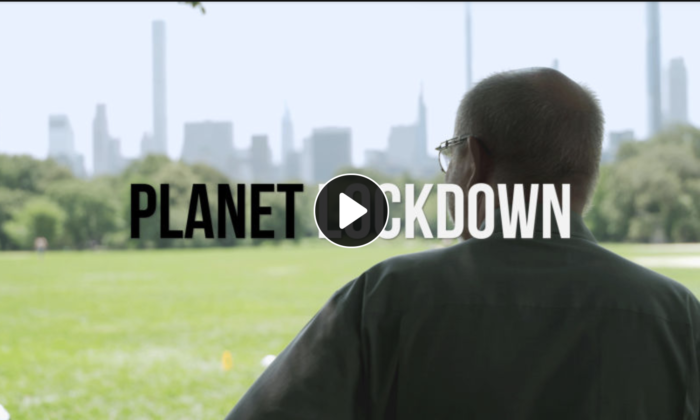 Banned Film Exposes the Real Reason for the COVID Pandemic

Prior to 2020, if you heard the term “lockdown” you might think of something that happens in a prison — not in a free society. This mechanism of control has since become commonplace — not among prisoners but among the free — with repercussions that are only beginning to be understood.

The film Planet Lockdown explores this unprecedented time in history, speaking with epidemiologists, scientists, doctors and other experts to uncover the real motives behind the increasing totalitarian control taking over the globe. Already banned by Facebook and YouTube, the film starts at the beginning of the pandemic, when we were told lockdowns were necessary to “flatten the curve.”

This was supposed to be a short-term, 15-day event in the U.S., but the narrative soon changed to ongoing restrictions. As Michael Yeadon, Ph.D., a former vice-president and chief scientific adviser of the drug company Pfizer and founder and CEO of the biotech company Ziarco, now owned by Novartis, explained, people have historically quarantined the sick, but quarantining healthy people, as has occurred for the past two years, has no scientific backing or historic precedence.2

“Given this virus represents, at most, a slightly bigger risk to the old and ill than seasonal influenza, and a less risk, a smaller risk, to almost everyone else who’s younger and fit,” Yeadon says, “it was never necessary for us to have done anything. We didn’t need to do anything — lockdowns, masks, testing, vaccines even.”3

The filmmakers of Planet Lockdown are allowing a free viewing of this film (for a limited time). CLICK HERE to learn more about their important mission and see how you can help!

Dr. Scott Jensen, a family doctor and former member of the Minnesota Senate, received an email from the Department of Health that seemed to be coaching him to use COVID-19 as a diagnosis in situations where he wouldn’t have previously used influenza or any other specific viral diagnosis without first testing for it. He said:4

“What struck me right away was I felt like I was being coached to go ahead and use COVID-19 without using the same standards of precision that I would for other things. If I’m going to make a diagnosis, I believe as a physician I have an obligation to use the tools available to me to nail it down with as much certainty as possible.

And it seemed to me that the Department of Health, and the link to this CDC document that said you could diagnose COVID-19 as a cause of death on a death certificate … those two documents, in tandem, went against everything that I had been taught or doing for the last 35 years.”

Even Dr. Ngozi Ezike, director of the Illinois Department of Health, is featured in the film stating that even if you died of a clear alternate cause, if you had COVID-19 at the same time, it would still be listed as a COVID death. “Everyone who is listed as a COVID death, doesn’t mean that was the cause of the death,” she says.5

In January 2020, the PCR test for COVID-19 came out, which allowed health officials to define COVID-19 “cases.” If the test was positive, it counted as a case — it didn’t matter if you have symptoms or not. Reiner Fuellmich, global fraud attorney, founder of the Corona Investigative Committee, pointed out, “It’s never, in the history of mankind, in the history of medicine, there’s never been testing of healthy people.”6

Yeadon agrees that mass testing of people with no symptoms has no scientific basis. Rather, he says, “It’s just a way to frighten people.”7 The rising “cases,” based on PCR testing, is what built the crisis. But counting cases was only measuring the activity of testing; the more that testing occurred, the more cases that were found.

‘Fear Everyone’ Became the Message

June 8, 2020, WHO director general Tedros Adhanom Ghebreyesus announced that asymptomatic people could transmit COVID-19. That same day, Maria Van Kerkhove, WHO technical lead for the COVID-19 pandemic, made it very clear that people who have COVID-19 without any symptoms “rarely” transmit the disease to others. In a dramatic about-face, WHO then backtracked on the statement just one day later.8

Alexandra Henrion-Caude, geneticist, former director of research with the French National Institute of Health, is among those who have noticed something off from the start. “I was very puzzled since the very beginning … I was alert to the fact that what we were living was not quite right.”10

She notes that the notion of asymptomatic spread is terrifying because it turns virtually anyone you meet or encounter on the street into the enemy, because they could be exposing you to SARS-CoV-2. “This is actually terrible because it denies the capacity of a person to be a healthy person. Because if asymptomatic [spread] exists, then who is healthy? No one.”

What’s more, the “proof” of asymptomatic spread is flawed and fraudulent. The New England Journal of Medicine published an article suggesting the transmission of COVID-19 is possible from an asymptomatic carrier in January 2020.11

It was based on a 33-year-old businessman who had met with his business partner from Shanghai, then developed a fever and productive cough. The next evening, he felt better and went back to work January 27.

The writers reported the partner had been “well with no signs or symptoms of infection, but had become ill on her flight back to China, where she tested positive for 2019-nCoV on January 26.” From this case study, they theorized the virus could be transmitted from asymptomatic carriers. An important point was left out, which is that the researchers did not speak with the partner from Shanghai before publication.

However, Germany’s public health agency, the Robert Koch Institute (RKI), did speak with the woman on the phone, and she reported she did have symptoms while in Germany.12 So she was not asymptomatic after all.

In a State of Incoherence, People Crave Normalcy

The pandemic has twisted reality, leaving the public in a mental fog. “You’re regularly pledging obedience to things which are not logical,” Catherine Austin-Fitts, assistant secretary, Bush Sr. administration and investment adviser with Solari, Inc., says.13 WHO has changed definitions of herd immunity and pandemic, literally altering reality, and this is just one example.

Censorship and campaigns to discredit those who speak out against the narrative are additional control mechanisms that distort the truth. Bishop Schneider of Kazakhstan says the pandemic measures are very similar to Soviet times where he lived, in that there was only one narrative, and if you said there was another meaning, you were declared an enemy.

“When you had another opinion, they said, ‘You are a conspiracy group. You have a conspiracy theory. You have hate speech. This expression, hate speech, came from the communists.”14 It’s psychological manipulation, based on fear, which makes people act totally irrational. The artificially imposed state of incoherence was even described by Austin-Fitts as a torture tactic, designed to get people to submit to vaccine passports and COVID-19 shots:15

“Human beings crave coherence. And so if you can put them in a state of incoherence they will literally do anything they can to get back to coherence. It’s a typical torture tactic. ‘If you just do what I want, I will allow you to go back to a state of coherence.’ So, if you just accept the [vaccine] passports, you’ll be free. Or if you get the vaccination, you’ll just be free.”

Further, by declaring small businesses as “nonessential” during lockdowns, they get shut down, while Amazon, Walmart and other big box stores can take over their market share. A major transfer of wealth occurred away from small family-owned businesses to very large, publicly owned businesses that benefited from the digital economy. In the meantime, Austin-Fitts explains:16

“The people on Main St. have to keep paying off their credit cards or their mortgage, so they’re in a debt trap and they’re desperate to get cashflow to cover their debts and expenses.

In the meantime, you have the Federal Reserve institute a form of quantitative easing where they’re buying corporate bonds, and the guys who are taking up the market share can basically finance — or their banks can — at 0% to 1%, when everyone on Main St. is paying 16% to 17% to their credit cards, without income.

So basically now you’ve got them over a barrel and you can take away their market share, and generally they can’t afford to do what they say because they’re too busy trying to find money to feed their kids.”

New Control Systems Are Being Engineered

If a few people want to control many, how can you get the sheep into the slaughterhouse without them realizing and resisting? “The perfect thing,” Austin-Fitts says, is invisible enemies, like viruses.17 This ramps up fear so the public believes they need the government to protect them. Another effective tactic is “divide and conquer,” and the media plays an important role in this, dividing people over shots and masks, for instance.

“What COVID-19 is,” Austin-Fitts explains, “is the institution of controls necessary to convert the planet from the democratic process to technocracy. So what we’re watching is a change in control and an engineering of new control systems. So think of this as a coup d’état. It’s much more like a coup d’état than a virus.”18

Dr. Wolfgang Wodarg, a former public health official and member of German parliament, agrees, stating that pandemic responses have “nothing to do with hygiene. It has to do with criminology.”19 The global injection campaign is another form of control, one that’s forcing the public to receive experimental shots.

Many of the experts in the film bring up the Nuremberg Code, which spells out a set of research ethics principles for human experimentation. This set of principles was developed to ensure the medical horrors discovered during the Nuremberg trials at the end of World War II would never take place again.

But in the current climate of extreme censorship, people are not being informed about the full risks of the shots — which are only beginning to be uncovered. People are being forced into the shots due to mandates and loss of jobs and personal freedoms, like the ability to travel freely and attend business and social events.

In the End, Truth Will Win

A revolution is occurring, and the experts are hopeful that people will awaken to common sense and resist the totalitarian control that is threatening to take over the globe. Instead, society can be regenerated if people come together and fight back against the encroachment on our liberties.

Civil disobedience, boycotting businesses that are requiring vaccine passports, participating in rallies and fighting illegal mandates in court are ways that everyone can get involved in protecting freedom. “If they want to make us a machine, if they want to make us slaves, we say no,” Wodarg says. “… We don’t need you anymore, we are many … we don’t have to be afraid of any pandemic.”20