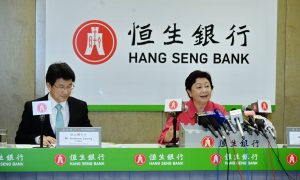 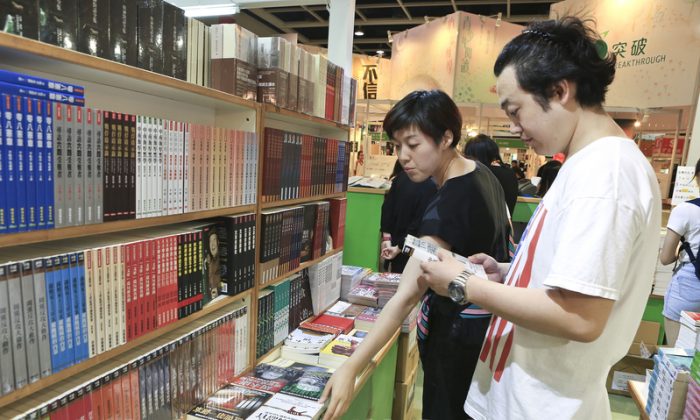 Mainland tourists check books in the section of books that are banned in mainland China. (Yu Gang/Epoch Times)
China

HONG KONG—Recent issues affecting Hong Kong’s political future took the spotlight at the 25th Hong Kong Book Fair, while many buyers from the mainland came to snatch up books banned in China.

Asia’s largest book fair, a weeklong event in Hong Kong during July, boasted a record of 570 exhibitors and over one million visitors. Books on political reform, Beijing’s “White Paper,” and Occupy Central featured prominently at the fair.

In June the Chinese Communist Party’s (CCP) State Council Information Office published a “white paper” that sought to reinterpret Hong Kong’s mini-constitution. The thrust of the paper is that Hong Kong’s autonomy is granted by Beijing, and could be taken away by Beijing.

Subculture Newsroom printed 20 new books this year, nine of which are political commentaries–a record high. Peng Zhiming, its president, said political books are not necessarily easy to sell, but amidst the printing monopoly by CCP-funded organizations, freedom of the press has been ever more marginalized. Therefore, he will persist in printing political books, Peng told Epoch Times.

This year Peng printed a new book titled “Love Hong Kong, Not the Party’s White Paper.” It comments on the bad policies by the Hong Kong government during the past six months.

Peng said politically this year is the most despicable and miserable year for Hong Kong. The use on the book cover of the simplified Chinese character for “Party” was to express the Hong Kong people’s anger, Peng said.

“Chinese culture is profound,” Peng explained. “In traditional characters, the symbol ‘black’ is imbedded in the character for ‘Party,’ because a party is not something upright and noble. But in the simplified character, the symbol ‘big brother’ is in the ‘Party’ character, which is worse than black, because big brother means boss, and you must all listen.”

Additionally, the book cover is designed to look like crumpled paper, sending the message that the CCP’s white paper is rubbish.

The book fair is also a destination for many mainland tourists. A lot of mandarin-speaking customers congregated in front of the “banned” books counter. Some were busy reading, some were filling up big suitcases.

Among the topics attracting mainlanders’ interest was the infighting at Zhongnanhai, the CCP’s headquarters and leadership compound in Beijing, and also a book series about the fall of Zhou Yongkang, published by the New Epoch Weekly. State-sanctioned organ harvesting in China was also a hot topic. Many mainlanders took photos of the books using their cell phones.

Miss Jin from Jiangsu Province purchased a copy of “A Collection of Essays by Bao Tong.” Bao Tong is the former Policy Secretary of Zhao Ziyang a reform-minded Chinese leader during the 1980 who was forced to resign as General Secretary of the CCP for his support of the 1989 Tiananmen student movement.

Miss Jin said things published by the Propaganda Department in her town are too much influenced by China Central Television (a CCP’s mouthpiece). “We want to step a little deeper into history, get a little closer, and get something more real,” she said.

She asked the vendor to wrap the book in a newspaper, hoping it would smoothly pass the border that way.

Mr. Li and his wife came from Shenzhen to visit the Fair. Li said they had planned this trip for a long time. When asked, why, he smiled and said, “You know.” His wife elaborated, saying she was looking for uncensored literature, such as The Last Aristocrats by Zhang Yihe, and others.

Another mainland visitor, Miss Deng, came to buy historical biographies printed in Taiwan for a newspaper owner friend back home,

“We have the right to know the truth about history,” she said. “It is up to the readers to judge which version to believe, not the government.”