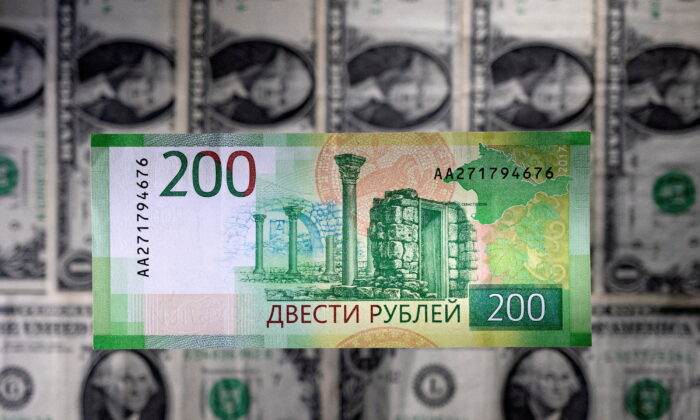 The Russian central bank has slashed its key interest rate amidst a decline in inflationary pressure and recovery of the ruble, the bank announced on Thursday.

The Bank of Russia’s board of directors has cut the key rate by 300 basis points to 11 percent per year, a May 26 press release said. The rate cut is effective from May 27, 2022. There has been a “significant slowdown” in the current price growth rates according to the latest weekly data.

Inflationary pressures are also easing due to the “ruble exchange rate dynamics” while inflation expectations among households and businesses are declining, the bank said.

In the aftermath of Russia’s invasion of Ukraine on Feb. 24, the Russian central bank had raised the key interest rate from 9.5 percent to 20 percent as the ruble tumbled against the dollar. On March 7, Ruble was trading at about 158 to the dollar, up from about 81 when the conflict in Ukraine began.

After the rate hike to 20 percent, policymakers slashed rates two times. The 300 basis point cut is the third reduction since then. Inflation has also slowed down.

“In April, annual inflation reached 17.8 percent, however, based on the estimate as of 20 May, it slowed down to 17.5 percent, decreasing faster than in the Bank of Russia’s April forecast,” the central bank stated.

Further reduction in the key rate in upcoming meetings is possible, the bank said. The decision regarding key rates will be taken after accounting for inflation dynamics, domestic and external conditions, as well as the reaction of financial markets.

The Russian central bank is forecasting annual inflation to decrease to 5 to 7 percent in 2023 and to 4 percent in 2024. The next rate review meeting of the board of directors is scheduled for June 10.

Elvira Nabiullina, head of the Central Bank of Russia, believes that the economy is entering a period of structural transformation and that banks require additional capital support, according to Reuters.

The ruble has mostly been supported this year by capital controls. “Thanks to these factors, inflation is falling faster than we expected,” Nabiullina said.

“This allows us to lower the key rate today without creating new pro-inflationary risks. … We allow for the possibility of further easing of the key rate at upcoming meetings.”