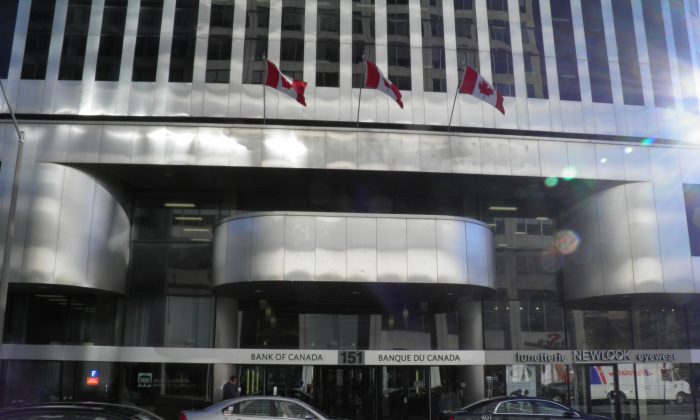 The Bank of Canada maintained the overnight rate at 1 percent in its sixth interest rate announcement of 2014 on Sept. 3. (Epoch Times)
Business

Bank of Canada Keeps Target Rate at 1% With Neutral Bias

OTTAWA—As widely expected, the Bank of Canada maintained its target overnight rate at 1 percent on Sept. 3, along with a neutral stance with respect to the direction of the next change in rate.

The central bank’s statement acknowledged that growth and inflation have played out very much as was expected in its July monetary policy report (MPR). However, its characterization of the housing sector has distinctly shifted to a more “hawkish” tone.

Inflation risks remain “roughly balanced,” and the stronger second-quarter GDP growth has come to “almost exactly the level the Bank had projected in July’s MPR.” On Aug. 29, second quarter GDP came in at 3.1 percent.

With the strengthening of the housing market in Canada, the central bank no longer characterized housing imbalances as “evolving in a constructive way” as it did at the time of the last interest rate announcement. Instead, the Bank acknowledged, “activity in the housing market has been stronger than anticipated,” although this strengthening does not warrant a monetary policy response at this time.

July readings for housing starts, price increases, and home sales have all been sparked by ongoing lower mortgage rates due to bond yields that have moved lower than what was expected at the start of the year. Gone is any mention of a “soft landing” in the housing market, and how the central bank reacts to further strengthening in housing market indicators will be closely watched.

In terms of the global economy, the central bank had used the term “serial disappointment” in its July statement and now specifically acknowledges the weakening confidence in Europe due to the Russia-Ukraine conflict. Germany, the engine of Europe, has seen its GDP shrink and its 10-year bond yield reach record lows, below 1 percent, since the last interest rate announcement.

Closer to home, strengthened U.S. economic performance and confidence have seen U.S. investment spending contributing to a strong rebound in Canadian exports, which has also been helped by a depreciating Canadian dollar.

Bank of Canada governor Stephen Poloz commented at Jackson Hole that the Bank of Canada does not have to raise rates in tandem with the U.S. given that the overnight rate is already at 1 percent.

Excess capacity still remains in the Canadian economy and this is expected to take two years to be absorbed. Excess capacity and doubts about the labor market are buffeting the strengthening growth and housing market. The central bank acknowledged that the pickup in exports needs to be sustained before domestic investment and hiring can be expected to pick up.

The two-year Canadian bond yield has moved higher by roughly four basis points, while the 10-year bond yield has come down by about 10 basis points since the mid-July announcement. (A basis point is one one-hundredth of a percent.) The bond market hardly reacted to the Sept. 3 statement’s release, but the Canadian dollar strengthened by 0.003 to around 0.9185 shortly thereafter.

North American stock markets have done very well since the last interest rate announcement, with the TSX up roughly 400 points or 2.5 percent, reflecting increased optimism in the domestic economy as well as that of the U.S.

The next interest rate announcement from the Bank of Canada comes Oct. 22 and will be accompanied by a full outlook for the economy, including its annually updated estimate of the economy’s potential which is published in the MPR.