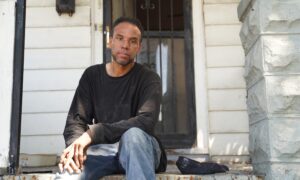 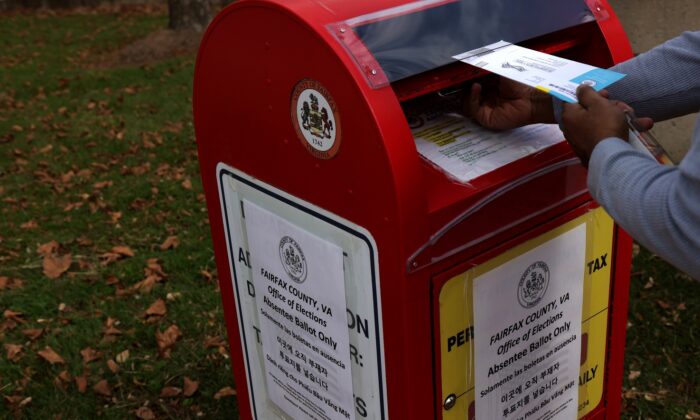 A voter drops an absentee ballot for the Nov. 3 election into a collecting bin outside Fairfax County Government Center in Fairfax, Va. on Oct. 19, 2020. (Alex Wong/Getty Images)
2020 Election

The controversial practice of ballot harvesting, or allowing a third party to deliver a voter’s ballot to election officials, may drag out the Nov. 3 presidential election, experts say.

The hotly contested battleground states of Colorado (9 electoral votes), Florida (29), Georgia (16), Iowa (6), Maine (4), Minnesota (10), Texas (38), and Virginia (13)—which collectively account for 125 of the 270 votes in the Electoral College needed to elect the president—all allow a voter to designate someone else to submit their ballot, a practice known as ballot harvesting. California, which is not likely to be at play in the presidential election, also practices ballot harvesting, among other states.

What electoral integrity advocates consider to be lax practices also exist in Nevada, North Carolina, and Pennsylvania—states likely to be key in deciding the presidential race—which could lead to administrative headaches when the states tabulate the votes. Delayed results could prevent a winner from being determined in the presidential race for days or even weeks after Election Day.

What Is Ballot Harvesting?

But what really grabbed Republicans’ attention was the fact that several of their candidates, such as former California State Assembly member Young O. Kim seemed to be winners on election night, but ended up losing as the vote-counting continued for days after.

“We were only down 26 seats the night of the election and three weeks later, we lost basically every California race,’’ Ryan said, according to Politico. “This election system they have—I can’t begin to understand what ‘ballot harvesting’ is.”

According to the National Conference of State Legislatures (NCSL), most states allow ballot harvesting in one form or another.

Some states, such as Alabama, say the voter must return the ballot. Ten states permit a family member to return a ballot for the voter, and 26 states, plus the District of Columbia, let the voter designate someone to return their ballot on their behalf.

Of the 26 states, 12 limit how many ballots any one designated agent is allowed to collect. The limits were imposed on the theory that saving people the task of returning their ballot “can bleed into encouraging them to vote a certain way,” NCSL reports. The laws of 13 states are silent on the issue of ballot harvesting.

Ballot harvesting is more widely practiced among Democrats than Republicans, who tend to eschew a practice they view as corrupt or unethical.

“The central ingredient to ballot harvesting is a power imbalance,” Adams said.

“The people having ballots harvested are often poor and powerless. They are approached by people who are perceived to be politically connected in the community, usually as associates of the locally politically powerful. It happens in the Rio Grande Valley, in poor counties in the South, and in some urban areas. It is not a phenomenon that lends itself to GOP voters, so I would hope Republicans are more worried about voting in person than trying to emulate a tactic more common in non-GOP areas.”

Donny Ferguson, who has worked as a campaign consultant for Republican candidates, says no electoral campaign can afford to ignore ballot harvesting in order to get the vote out. Ferguson is a former congressional aide and president of the nonprofit Americans for a Better Economy.

“Where there’s been fraud and abuse is when people ‘help’ voters fill out their ballot, like when union bosses send people to nursing homes to fill out the ballots of invalids. That wouldn’t be stopped by changing the delivery system. They’d just put stamps on the ballots and drop them in the mail, which would actually be easier.

“Ballot harvesting used to be a great source of votes for Republicans, who had programs to get absentee ballots into the hands of supporters and get them turned in,” he said.

Not doing it is akin to unilateral disarmament, Ferguson argued.

“If the other side has a 30-day plan to turn out their vote and you have a one-day plan, you’re handing your opponent an advantage. Cars break down, kids get sick, and people get stuck at work. It could be a huge boost in battleground states like Florida and Arizona, which tend to have more older voters who find it harder to physically get to a polling place, or in states with more rural voters who have to make longer trips to mail ballots or get to a polling place.”

Ellen Swensen, chief analyst and co-founder of the Election Integrity Project California (EIPCa), is skeptical of ballot harvesting, which she said has been abused in her home state.

Ballot harvesting was used by Democrats to get their candidate, Katie Hill, elected in California’s 25th Congressional District, long considered a safe Republican seat, in the 2018 election, Swensen told The Epoch Times.

Hill resigned Nov. 1, 2019, following a sex scandal. A special election took place on May 12, when the pandemic lockdown prevented ballot harvesting from being practiced, she said.

“So it was 100 percent vote-by-mail, and it very easily flipped back to Republicans.”

“There’s probably going to be semi-harvesting. People are afraid of the COVID still so they’re not going to open the doors to the harvesters. The Republican Party is on to what happened in 2018 and they’re actually doing their own harvesting,” she said.

The GOP has created its own drop boxes around California for voters to deposit their ballots in, boxes that Democrats claim are illegal.

The high court agreed earlier this month to hear the case, as The Epoch Times reported, but it won’t be heard before Election Day. Republicans are challenging Democratic Party efforts to relax electoral integrity measures and throw open the state to ballot harvesting and out-of-precinct voting. Arizona’s current ban on ballot harvesting will remain in place for the time being.

And while ballot harvesting may already be illegal in Pennsylvania, recent court rulings have gutted electoral integrity safeguards, Republicans say.

Pennsylvania Republicans filed a second emergency request with the U.S. Supreme Court last week, as The Epoch Times reported, in the hope of undoing a state Supreme Court ruling that forces state election officials to accept mail-in ballots received up to three days after Election Day. The GOP says the extra time is an invitation to fraud, especially because the Pennsylvania court ruled election officials must accept ballots late even if they lack a postmark.

On Oct. 19, the nation’s highest court denied on a 4–4 vote a Republican request to stay the Pennsylvania Supreme Court’s ruling mandating the three-day extension. The court was shorthanded because Justice Ruth Bader Ginsburg died Sept. 18.

But now that Justice Amy Coney Barrett has been confirmed by the U.S. Senate, some Republicans are hoping she will be a tiebreaker in the case, and that the court will stay or reverse the Pennsylvania ruling, which they say usurps the power of the state legislature and defies state law.

The ruling, which “opens the door to fraud,” came out of the activism of DNC lawyer Marc Elias, Swensen said. Elias, along with former U.S. Attorney General Eric Holder, has been leading litigation efforts in battleground states to make election laws more favorable to Democrats.

“He is out there … trying to reduce signature matching, the date of receipt, all the basic laws we’ve worked for all these years.”

Elsewhere, election officials are mailing out more unsolicited ballots than ever before, “not just in California where I am, but Clark County, Nevada, is also mailing to inactives.”

“All across the country, people are receiving ballots for someone who doesn’t live there or their deceased relatives,” she said.

EIPCa believes at least 440,000 inactive voters in California alone were mailed ballots for the Nov. 3 election. Of the total, close to 420,000 ballots were sent to people who have likely moved or died. Between two and four ballots were mailed to each of 20,000 voters, the group announced in a press release Oct. 19, after sending its findings to California Secretary of State Alex Padilla, a Democrat.

In a recent interview, Catherine Engelbrecht, who is the founder and president of True the Vote, lamented the laxness of ballot security measures in the Tar Heel State. The Houston-based good-government group describes itself as “the country’s largest voters’ rights organization,” with its stated mission to “empower and equip citizens to ensure that our election process is protected from fraud and exploitation.”

In a 2018 congressional contest in North Carolina, a Republican political operative was indicted for allegedly paying workers to collect completed ballots, and the results of the election were invalidated.

But today, “in North Carolina you can send an email to the board of elections and say you represent anybody you want and you want their ballot and you want it sent to a different address, and they’ll do it and they take it all at face value,” Engelbrecht said. “There’s no requirement that there’s any identifying information given, no standard, no proper protocol, you can just send an email and say you want somebody’s ballot … [or] as many ballots as you want.

True the Vote is in the process of examining data from “states that publish their early election and mail ballot information and trying to identify whether there are anomalies that can … be corrected before they become part of the final count,” she said, adding Texas has “big, big, big” problems with its data.

Engelbrecht said she fears, as many commentators have warned, that Americans won’t know who won the presidential contest until well after Election Day.

“This is like Bush v. Gore times ‘Infinity War,’” she said in a reference to the 36-day recount battle over the 2000 election and the epic 2018 superhero movie, “Avengers: Infinity War.” The presidential election was only resolved when the U.S. Supreme Court ruled that the recount standards used at different locations in Florida were so wildly divergent that they violated voters’ equal-protection rights under the 14th Amendment.

“Think about how our country hung in the balance over one state and now, imagine that geometrically,” she said.