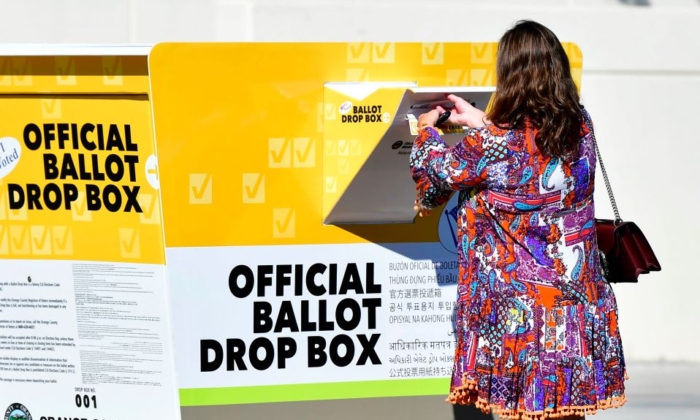 A woman casts her ballot for thr 2020 US Elections at an officla Orange County ballot drop-box at the Orange County Registrar's Office in Santa Ana, California on October 13, 2020. (FREDERIC J. BROWN/AFP via Getty Images)
Election Integrity

Ballot drop boxes are a controversial component of post-2020 election integrity efforts in state legislatures with Republicans in Georgia and Arizona proposing bills seeking to ban them altogether.

“Drop boxes were never meant to be a long-term way to vote. They were an emergency response and that emergency is not in effect anymore,” Georgia Senate President Butch Miller (R) told The Epoch Times.

Miller, who is running for lieutenant governor, is sponsoring Senate Bill 325 which, among other provisions, prohibits drop boxes. Georgia is “an in-person voting state and always has been,” he said, noting until the pandemic emerged in early 2020, “drop boxes were nowhere in Georgia law.”

According to the National Conference of State Legislatures (NCSL), only eight states mentioned drop boxes in election statutes before 2020 but, during the pandemic, under emergency vote-by-mail measures often imposed unilaterally by governors’ executive orders or administrative rule making, nearly 40 states allowed drop boxes for the first time.

Drop box laws, orders, and rules have drawn at least 35 lawsuits in the last 18 months, according to NCSL.

The appellate order did not address Bohren’s decision in the suit, filed by the Wisconsin Institute for Law & Liberty, only that it came too close to the state’s Feb. 15 municipal primary elections.

“This is basically no more drop boxes,” Rogers said to applause when she introduced the bill during a Feb. 10 Senate Government Committee hearing.

Although the Arizona bill, SB 1058, advanced through the committee, advocates for the disabled raised numerous issues with implementing the bill as proposed.

“We are not allowed to ask people what their disability is,” Arizona Association of Counties Executive Director Jen Marson told the panel while the state’s Democratic party vowed to fight the measure in the legislature and the courts.

“Arizona Republicans want to get rid of voting by mail, outlaw drop boxes, let Cyber Ninjas tell election officials who to kick off the voter rolls, and put poll workers in jail,” the Arizona Democratic Party said in a statement. “These are attacks on our democracy.”

In Utah, a proposed ‘Secure Vote Utah’ constitutional amendment would end all mail-in balloting, making drop boxes unnecessary, but failed to secure the needed 137,929 voter signatures by Feb. 15 to get on November’s ballot.

Secure Vote Utah proponents in acknowledging their petition drive fell short, said in a statement that “this issue is not going away.”

“We just did not have enough signature-gathering time to put the ‘Secure the Vote Act’ on the ballot for 2022,” Secure Vote Utah said. “Nonetheless, our all-volunteer, grassroots effort accelerated to nearly a thousand in-person signatures a day, a pace that would have yielded a quarter million signatures in the normal time an initiative has to get on the ballot.”

With SB 202 in place, drop box use plunged in Georgia’s fall 2021 elections with half as many absentee voters using them in metro Atlanta compared to 2020, according to The Atlanta Journal-Constitution.

SB 202 “was a great start and the way we need to go,” said Miller, who is running for lieutenant governor in May’s Republican primary against Sen. Burt Jones (R) who has been endorsed by former President Donald Trump and has submitted his own slate of election integrity bills, including one requiring all votes be cast with paper ballots. Jones did not return repeated calls to discuss his proposals.

The Democratic Party of Georgia in statements said SB 325 is “based on debunked claims of voter fraud” and more about machinations within the state’s Republican Party than about election fraud.

“Miller’s proposal comes after he failed to win Donald Trump’s endorsement in the GOP primary for Lieutenant Governor, and after racist comments he made attacking new Georgians ‘that don’t think like us,’” the party said in a January statement.

“He’s trying to silence the voters of color who elected Democrats last cycle by banning one of the most popular ways they chose to cast their ballots,” Democratic Party of Georgia Executive Director Scott Hogan said in a statement when SB 325 was pre-filed.

“Georgia counties are already stretched thin. There are 17 days of early voting and mail-in voting. Drop box monitoring and the process it takes, only makes the problem worse,” he said. “This will alleviate pressure on counties.”

SB 325 is “getting a great reception and great feedback. I think we’re going to pass it out of committees, get it through the process relatively intact, probably on a straight party vote,” he said, although House Speaker David Ralston (R) has expressed reservations.

Miller and other drop-box critics say there is simply no way security can be guaranteed.

“I don’t know if (banning) is viable from a political standpoint, but I think it’s a good thing from a security standpoint,” Heritage Foundation Senior Legal Fellow and Election Law Reform Initiative Manager Hans von Spakovsky told The Epoch Times.

Drop boxes must have 24-hour in-person surveillance to “ensure someone isn’t coming in and dropping off 500 ballots,” he said, noting current rules in many states are basically “opening up a way for elections to be stolen.”

Pennsylvania Senate President Pro Tempore Jake Corman (R) told The Epoch Times audits have uncovered “evidence of people canvassing votes and putting several in drop boxes at the same time. That is illegal” and just one of many issues with drop boxes.

“No one ever envisioned drop boxes until this governor (Democrat Tom Wolf) and (state) election administration created them in 2020,” Corman said, noting a 2022 bill banning drop boxes is likely to surface in Pennsylvania.

“We never had them before. I don’t see any need for them,” he said. “We voted for 100 years and then the governor created them on his own. These are things that, if you are going to have faith in the system, must be addressed.”