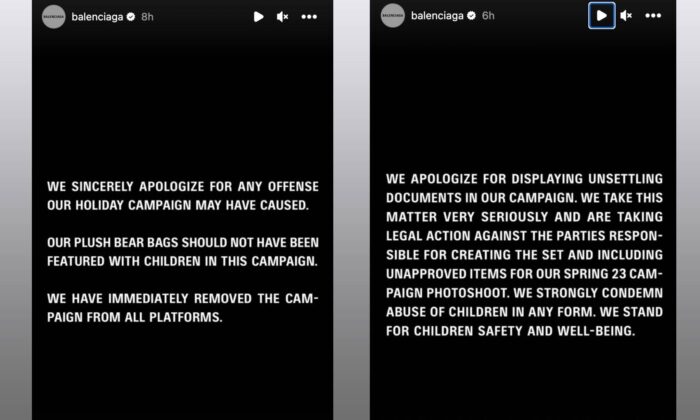 Balenciaga issues apologies on Instagram over its Balenciaga Objects and Spring 23 collection ad campaigns, on Nov. 22, 2022. (Screenshots via The Epoch Times)
By Bryan Jung

Fashion company Balenciaga claimed that it made “grievous errors” in a recent ad campaign that gave hints of pedophilia, and that it strongly condemns child abuse.

The apparel giant was forced to apologize after a massive public backlash following a failed effort to double down in support of its controversial ads, which critics described as sexually suggestive toward children.

The ads were released in November as part of a campaign to promote Balenciaga’s Spring/Summer 2023 collection, which debuted earlier this fall at Paris Fashion Week.

Another photo, which was shot in what appeared to be an office setting, included a printed copy of a key 2008 U.S. Supreme Court decision regarding child pornography laws in the background.

The court ruling for United States v. Williams decided that child pornography was not protected by freedom of speech and that it could be banned by the authorities.

The photo was published a few days after the bondage teddy bear photos, as part of its 2023 Garde Robe ad campaign, featuring prominent figures such as Nicole Kidman and Bella Hadid.

The fashion house, which is owned by French luxury goods giant Kering, posted an apology on Instagram on Nov. 28.

“We strongly condemn child abuse; it was never our intent to include it in the narrative,” stated the luxury company, saying that “our plush bear bags and the gift collection should have not been featured with children.”

“This was a wrong choice by Balenciaga, combined with our failure in assessing and validating images,” and that “the responsibility for this lies with Balenciaga alone.”

Referring to the second photo, “All the items included in this shooting were provided by third parties that confirmed in writing that these props were fake office documents,” and that “they turned out to be [real legal] papers most likely coming from the filming of a television drama.”

Balenciaga then promised that it would revise its “organization and collective ways of working,” along with the “structures around our creative processes and validation steps. We want to ensure that new controls mark a pivot and will prevent this from happening again.”

It will also work with “organizations who specialize in child protection and aims at ending child abuse and exploitation,” in order to “learn from our mistakes and identify ways we can contribute.”

“Balenciaga reiterates its sincere apologies for the offense we have caused and extends its apologies to talents and partners,” the statement concluded.

The company blamed the inclusion of the Supreme Court documents on “reckless negligence” by a contract worker hired for the shoot, and that a complaint was filed against this individual.

On Nov. 25, Balenciaga filed a $25 million lawsuit against production company North Six and set designer Nicholas Des Jardins, who were in charge of the fashion house’s ad campaign, but not for the teddy bear photos, which they were not involved in.

Meanwhile, the other fashion brands owned by Kering, such as Gucci, Bottega Veneta, Alexander McQueen, and Saint Laurent, have remained silent about the scandal, reported Fox Business.

Balenciaga has long been associated with popular icons like Kim Kardashian and actress Salma Hayek, whose husband François-Henri Pinault is the company’s CEO.

“I have been quiet for the past few days, not because I haven’t been disgusted and outraged by the recent Balenciaga campaigns but because I wanted an opportunity to speak to their team to understand for myself how this could have happened,” wrote Kardashian in a Twitter post, in response to criticism of her close association with the firm.

“As a mother of four, I have been shaken by the disturbing images. The safety of children must be held with the highest regard, and any attempts to normalize child abuse of any kind should have no place in our society—period,” she wrote.

The fashion house faced a wave of other controversies before the recent scandal.

The company also made headlines with its decision to cancel its Twitter account following Elon Musk’s takeover of the social media platform.

The row over the ad campaign has sparked a wave of protests on social media and an inquiry over clandestine support for pedophilia in elite society.

Fox News host Tucker Carlson slammed the mainstream media for what he called a lack of interest, allegedly, in the sexual exploitation of children, and noted a growing tolerance for pedophilia among certain elements in the United States.