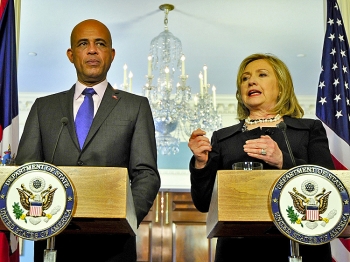 By Jasper Fakkert
Print
For years Michel “Sweet Micky” Martelly was known for his extravagant musical performances, at times donning diapers or a dress to stir things up. Now he faces a world audience and a daunting new job—president-elect of Haiti.

These days Martelly wears smart dark suits and a well-matching tie. Just yesterday he met with Secretary of State Hillary Clinton and director of the International Monetary Fund Dominique Strauss-Kahn.

“To be honest with you, everybody thought we were crazy because there is no way he was going to be elected,” says Mike Jean, a New York-based musician, who helped Martelly in his campaign with fundraising and making introductions in the States.

A year later, the 50-year-old Haitian musician managed to win the March run-off elections in the deeply troubled nation with a landslide victory. Martelly beat out opponent Mirlande Manigat, the former first lady and law professor, by two-thirds of the votes.

The idea of having Martelly run for president came from Pras Michel, founder of the Grammy award-winning hip-hop group the Fugees.

“It all started, you know kind of like me reaching out to Martelly. After the earthquake I felt he would be the best candidate at that time for Haiti,” says Michel.

The famous hip-hopper believes Martelly is the change people in Haiti have wanted to see. “He was one of the people, he had that thing that you can’t quite explain what it is, it just is. It is the thing that Kennedy had, that Martin Luther King had, that thing that Obama has.”

Martelly successfully tapped into the dissatisfaction among many Haitians. He was able to gather large crowds of mainly young Haitians at his rallies. Nonetheless, only 23 percent of Haitians turned out to vote, so Martelly still has a ways to go to corral support from the rest of his constituents.

Fifteen months after a devastating earthquake in Haiti, much of the poor nation remains in rubble. The island nation has borne a continuous plague of social ills, paralyzing mismanagement, corruption, and desperate poverty.

Martelly made a career as a sociopolitical activist singer and composer of compas, a style of Haitian dance music sung in Creole. He didn’t have any political experience ahead of his presidential campaign. But that’s no problem says Pras Michel: look at who has won the elections now.

“The ones that had [political] experience in the last 30 years, they brought the country down to the lowest point; that argument that he didn’t have experience means absolutely nothing,” says Michel.

“We just need a good leader who has a good sense to see life. He has people [around] who are more experienced than him, he will link with them and work with them.”

Musicians Jean and Michel have played a key role in Martelly’s election campaign, raising funds for him and helping him make connections in America. Both men say they will continue to play a role in Martelly’s presidency, mainly in seeking foreign investors for Haiti.

“He has a commitment to transparency and good governance, and to getting results for people. I am very encouraged by the campaign that Mr. Martelly ran, his emphasis on the people and their needs, his willingness to be very clear in what he hoped to achieve on their behalf, and now he has a chance to lead,” Clinton said.

Martelly will now face a daunting task of creating good governance in Haiti, an essential requirement to receive any further installments of the billions in international aid money donated after the earthquake.

Michel’s cousin Wyclef Jean, also a band member of Fugees, also attempted to run for president in Haiti, but was disqualified for not meeting the residency requirements. Michel said Wyclef Jean was “ecstatic” when he heard Martelly won. “Because Martelly is one of us, he is a musician, he has the same vision as we have,” said Michel.