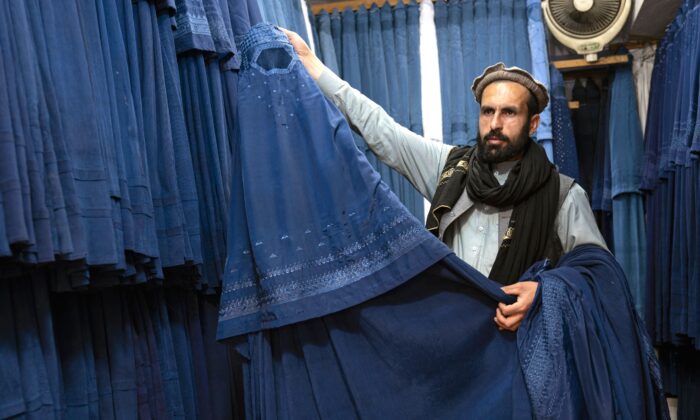 An Afghan vendor displays a burqa at his shop at Mandawi market in Kabul, Afghanistan, on May 8, 2022. (Wakil Kohsar/AFP via Getty Images)
Viewpoints

Back to the Burqa—It’s Biden’s Taliban Now

Less than a year after the chaotic U.S. departure from Afghanistan on Aug. 30, 2021, the Taliban, despite promises to the contrary, have returned to being, well, the Taliban.

That means misogyny has returned to the country on an almost incomprehensible scale. The burqa is back, accompanied by women being locked in their homes. For the most part, forget about school and work, and those men who might be sympathetic to their wives and daughters better get with the program.

“A decree from the group’s supreme leader, Haibatullah Akhundzada, said that if a woman did not cover her face outside home, her father or closest male relative would be visited and face potential prison or firing from state jobs.

“‘We call on the world to co-operate with the Islamic Emirate and people of Afghanistan. … Don’t bother us. Don’t bring more pressure, because history is witness. Afghans won’t be affected by pressure,’ Mohammad Khalid Hanafi, the minister for the Propagation of Virtue and Prevention of Vice, told a news conference.”

Where does this all lead? Are we now going to be seeing videos again, as we did in 2016, of a kneeling burqa-clad woman being shot in the head in a sports stadium and other “Taliban executions”?

I can’t resist saying that this is yet another global tragedy that must—to a great degree anyway—be laid at the feet of our incredibly incompetent president.

Would the Taliban be behaving this way if the United States had kept Bagram Air Base, leaving even a small contingent of forces behind?

Would they be instituting their insane program of Islamic extremism if we had left the country in a relatively organized manner, without donating more than $80 billion in advanced armaments to the Taliban?

Our behavior harked back to the ’60s, when the United States was called a “pitiful, helpless giant.”

We had what was effectively no leadership, instead, we had someone incapable of using basic common sense and evacuating in some semblance of an orderly fashion.

Do you think the Taliban didn’t notice?

They simply lied to the kufr (non-Muslims), as is instructed in their ancient texts, at least as they interpret them, and then did what they always wanted to do, within months.

The left in our country sees itself as the protector of women’s rights. Actually, as it is with many things regarding the left, it’s the reverse.

Under President Joe Biden, we have what’s, in essence, a morally narcissistic foreign policy—everything is done for show and nothing for reality.

The whole world, as they say, is watching. What they’ve seen since the very first day, when the Keystone XL pipeline was stopped, is a flight from that reality in exchange for moral posturing.

U.S. leadership is gone. The Taliban lives on and thrives as never before.

But not to worry—First Lady Jill Biden went to Ukraine on a “surprise visit.” All is not lost.