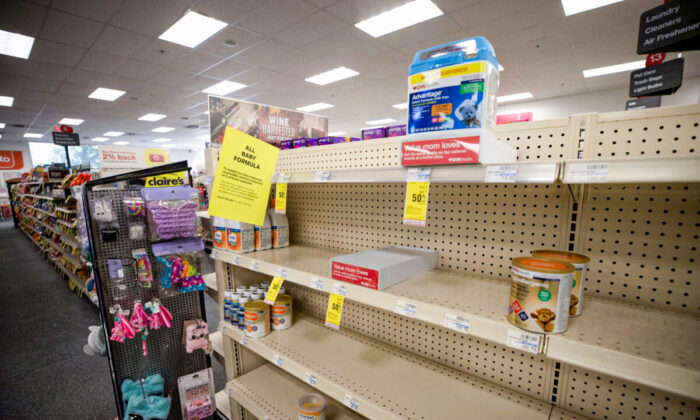 Empty shelves show a shortage of baby formula at CVS in San Antonio, Texas, on May 10, 2022. (Kaylee Greenlee Beal/Reuters)
US News

Testifying before a Senate hearing, Califf said that while he cannot give exact dates, his expectation is “that within two months we should be beyond normal and with a plethora” of formula supply.

“It’s going to be gradual improvement up to probably somewhere around two months until the shelves are replete again,” he told lawmakers at the Senate Health, Education, Labor, and Pensions Committee hearing on the baby formula shortage on Thursday.

“Due to all the measures being taken, the shortage is going to be getting better and better.”

Supply chain pressures and a shortage of workers amid the COVID-19 pandemic have been responsible for an ongoing baby formula shortage in the nation, but the supply became even more scarce after Abbott Nutrition in February recalled multiple baby formula products, including some Similac products, after four infants fell sick, two of whom died.

Abbott, which has the largest U.S. market share for infant formula, also temporarily shuttered its formula manufacturing plant in Sturgis, Michigan—where the recalled products were produced—over safety concerns, after an FDA investigation found unsanitary conditions there. The plant is one of three run by Abbott.

An investigation into suspected bacterial contamination at the facility failed to confirm a link to the recalled products, with the FDA saying the bacterial strains the infants fell sick to did not match the strains at the plant.

Abbott said the plant is due to resume production on June 4, but previously noted it would take six to eight weeks for the products to arrive in stores. The company said it would prioritize supplying its specialty formula EleCare on or about June 20. The formula would be provided to children in need for free.

Califf said that FDA inspectors found unsanitary conditions at the Sturgis facility, including evidence of previous bacterial contamination, roof leaks, and a lack of adequate hygiene. Before it can reopen, the facility has to implement a series of steps to ensure safe production to comply with U.S. food safety standards, he said.

On Wednesday, Califf had told House lawmakers that Abbott did not have a contingency plan to produce its specialty formulas that serve as the only source of nutrition for thousands of babies with metabolic disorders. He added that the best option was to enter into a consent decree agreement with Abbott, “where we literally have oversight of every single step” of remediation of problems at the facility to get it back to production as soon as possible.

The FDA eased import restrictions this month by doing away with various labeling requirements. These rules had contributed to about 98 percent of the pre-crisis baby formula supply being produced domestically by just three companies. The Biden administration sees the easing of restrictions as a temporary measure before the normal supply chain stabilizes.

Separately, the U.S. Department of Defense is airlifting about 1.5 million 8-ounce bottles of baby formula from Europe, as part of the White House’s recently launched initiative “Operation Fly Formula.” The first lots of formula arrived in Indianapolis, Indiana, from Germany on Sunday.