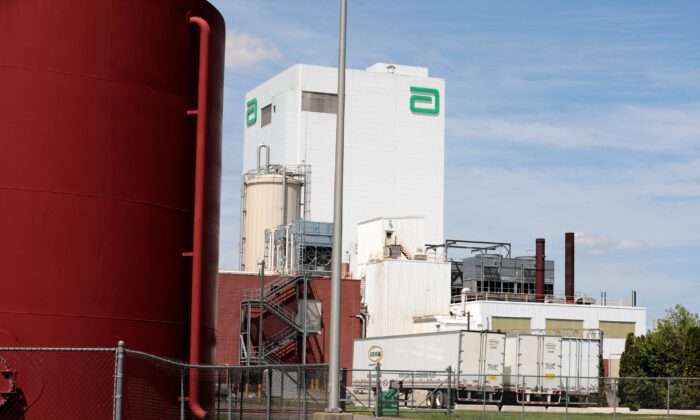 The Abbott manufacturing facility in Sturgis, Mich., on May 13, 2022. (Jeff Kowalsky/AFP via Getty Images)
By Zachary Stieber

Abbott Laboratories has flown millions of baby formula cans to the United States to help deal with shortages, the company said on May 13.

“We know that the recall has worsened the industry-wide infant formula shortage, and we have been working to get as much product into the hands of parents as we can,” a spokesperson said in a statement.

Millions of cans of infant formula powder have already been flown from Abbott’s facility in Cootehill, Ireland, according to the company.

That facility is registered with the U.S. Food and Drug Administration (FDA).

Few baby formula containers sold in the United States are from overseas, but the Biden administration announced this week that part of its plan to increase supply is to ease restrictions on imports, though it declined to share details.

Abbott is also ramping up production of liquid formula at its plant in Columbus, Ohio, and is paying rebates for people that obtain competitors’ products through the Special Supplemental Nutrition Program for Women, Infants, and Children in areas where Abbott holds the program contracts and its Similac formula is not available.

Abbott recalled some Similac products in February after an FDA investigation found unsanitary conditions at its Sturgis, Michigan plant, prompting the shutdown of the facility.

The plant is still not up and running, though Abbott says it can be within two weeks once the FDA grants clearance. The formula produced once the plant is back online won’t be available in stores for another six to eight weeks.

In a statement to news outlets, the FDA said that the plant “remains closed as the company works to correct findings related to the processes, procedures, and conditions that the FDA observed during its inspection.”

The regulator said earlier in the week that it was not objecting to Abbott releasing formula from the Sturgis plant to people on a case-by-case basis because of nationwide shortages, which stem from the recall and the missing production from the facility.

According to Datasembly, the United States out-of-stock rate for the week ending May 8 was 43 percent.

The U.S. Centers for Disease Control and Prevention has ended its probe of Abbott’s formula, which was suspected of being linked to cases of Cronobacter infections.

The Biden administration has also taken other steps to try to combat the shortages, such as cutting red tape to make it easier to import formula from overseas already approved by the FDA and offering support to manufacturers like Reckitt for increased production and quicker distribution.

Some lawmakers have criticized the administration for not acting faster, given that issues about the Michigan plant were first raised in 2021. Sen. Marco Rubio (R-Fla.) and others have called for Biden to invoke the Defense Production Act to compel producers to increase production, but the administration has not as of yet.

“That would be something which is on the table,” White House press secretary Jen Psaki told reporters in Washington on Friday. “We’ve not made a decision about [it], but [it] would help address issues over the long term.”