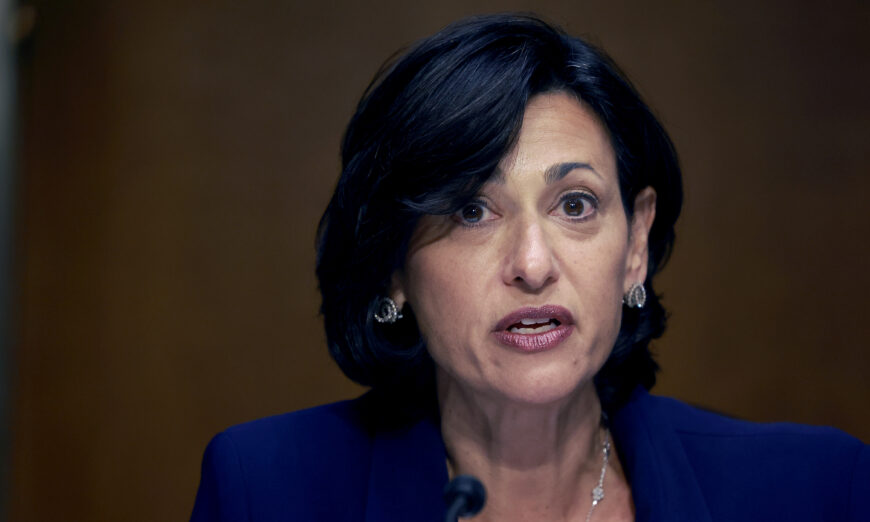 Dr. Rochelle Walensky, director of the Centers for Disease Control and Prevention, speaks in Washington on June 16, 2022. (Joe Raedle/Getty Images)

A study that inflated the number of COVID-19 deaths among children has been corrected after being promoted by top officials at the U.S. Centers for Disease Control and Prevention (CDC).

The paper falsely stated that at least 1,433 deaths primarily attributed to COVID-19 had occurred among those 19 and younger in the United States, but the actual number is 1,088, the authors acknowledged in the updated version (pdf).

The authors, led by British scientist Seth Flaxman, incorrectly utilized data from the CDC’s National Center for Health Statistics for the initial version. They said that they only included deaths where COVID-19 was considered the underlying, or primary, cause. But they actually also counted deaths where COVID-19 was listed as a contributing cause.

The initial version “incorrectly used these data,” the authors said in the updated paper.

Flaxman did not respond to a request for comment. Emails reviewed by The Epoch Times showed he did not understand how to use the CDC database that lists COVID-19 deaths before being told how to use it following publication of the study.

The other authors, all but one of whom are based outside of the United States, have not publicly commented on the correction.

The paper, which has still not been peer-reviewed, was cited by three CDC officials—including the agency’s director, Dr. Rochelle Walensky—while promoting COVID-19 vaccination for children under 5 years old in meetings and a press briefing in June.

“During March 2020 through April 2022, COVID-19 was among the top five leading causes of death in every age group of children under the age of 19 and the number one infectious cause of death in children,” Walensky said during a briefing, putting forth the same figures as outlined in the study.

But multiple issues with the research were identified by outside observers. The most important problem was including deaths were COVID-19 was not listed as the primary cause. Another was listing cumulative COVID-19 deaths against the annualized 2019 deaths of other causes, such as “accidents.”

The PowerPoint slides that the officials showed during the meetings while citing the paper were disseminated widely on social media by outside officials like Dr. Nirav Shah, the director of the Maine CDC, in asserting that COVID-19 vaccines are necessary for children.

The CDC, Walensky, Fleming-Dutra, Oliver, and Daley have not responded to queries and have not alerted the public to the corrected paper.

Kelley Krohnert, a citizen researcher and mother who flagged the issues and alerted Flaxman to them, told The Epoch Times that the refusal to address the corrected data is part of a pattern from the CDC during the pandemic.

“It would be nice if somewhere they would acknowledge and accept responsibility for alarming parents with a statistic that turns out is completely bogus,” Krohnert said.

The initial paper covered deaths recorded between March 2020 and April 2022.

The data highlighted by the CDC officials was already wrong because they used the cumulative number of deaths linked to COVID-19 in comparison with annualized figures for other causes of death, such as heart diseases and assault.

That slant put COVID-19 as a top five cause of death for all children.

Annualizing the COVID-19 deaths and comparing them to other annualized figures, COVID-19 ranked lower.

In the updated version, researchers left out the cumulative numbers. They took the death data for the 12 months starting on April 1, 2022, and compared the numbers with other causes of death from the year 2019.

Accidents, suicide, and malignant neoplasms were among the issues that caused more deaths than COVID-19, the researchers found. COVID-19 was listed as the eighth leading cause of death for 0- to 19-year-olds during the time studied. According to the death certificate data, just 764 deaths were linked to the disease.

The authors maintained that the threat COVID-19 poses to children means that kids should get COVID-19 vaccines and pharmaceutical treatments and “mitigations such as ventilation” should be used. In the earlier version, they said their findings “underscore the importance of continued vaccination campaigns for children ≥5 years in the US and for effective Covid-19 vaccines for under 5 year olds.”