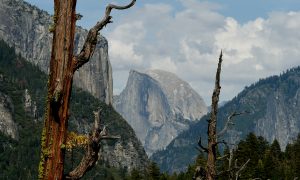 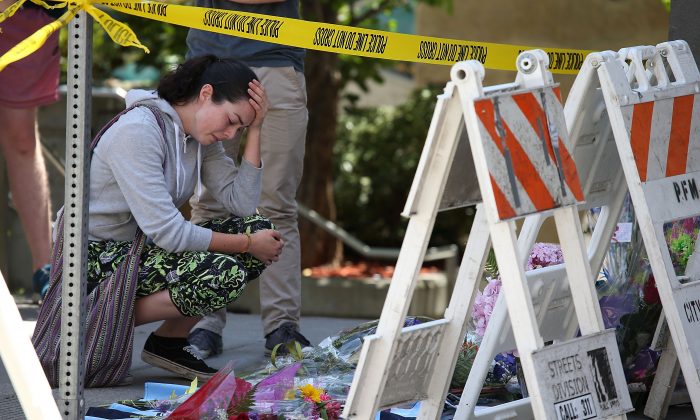 A woman cries as she leaves flowers at the scene of the balcony that collapsed at an apartment building near UC Berkeley in Berkeley, Calif., on Tuesday June 16, 2015. (Justin Sullivan/Getty Images)
US

BERKELEY, Calif. — Victims’ loved ones made their way toward Berkeley from Ireland as investigators Wednesday tried to pinpoint the cause of a balcony collapse that left six people dead and seven seriously injured.

One outside expert observing the investigation said that the balcony’s wooden beams appeared to be so badly deteriorated they were crumbling in engineers’ hands.

My heart breaks for the parents.
— Enda Kenny, Prime Minister

The accident happened early Tuesday, during a 21st birthday party involving a group of Irish students spending the summer in California. Five 21-year-olds from Ireland were killed, along with a young woman from California.

“My heart breaks for the parents,” Prime Minister Enda Kenny said from Dublin.

The small fifth-floor balcony was crammed with 13 people when it broke loose from an apartment building less than a decade old, dumping partygoers about 50 feet onto the pavement.

Flags flew at half-staff around Ireland, and the country’s parliament suspended normal business Wednesday. Books of condolences were opened at University College Dublin, where three of the students studied.

Memorials also took shape in Berkeley underneath the fallen balcony, with people leaving flowers, a pack of cigarettes, a photo, condolence notes and an Irish flag.

The Irish students were in the country on what are known as J-1 visas, which enable young people to work and travel in the U.S. over the summer.

The San Francisco Bay Area is especially popular with Irish students, about 700 of whom are working and playing here this summer, according to the consul general. Many work at Fisherman’s Wharf and other tourist sites.

“For many of my countrymen, this is a favorite experience, and to have this happen at the start of the season has left us frozen in shock,” said Philip Grant, Ireland’s San Francisco-based consul general.

The dead were identified as Ashley Donohoe, 22, of Rohnert Park, California, and Olivia Burke, Eoghan Culligan, Niccolai Schuster, Lorcan Miller and Eimear Walsh, all of Ireland.

As news of the accident broke, parents in Ireland desperately called the San Francisco Bay area to find out if their children were OK.

Sam McCarthy, 21, who was not at the party, said his mother called at 4 a.m. He said he was shocked by the news — he had come to California for a fun, independent summer.

“I thought it would be a cool experience,” said McCarthy, who works at a bike rental business in San Francisco.

Investigators are expected to look at such things as whether the balcony was built to code, whether it was overloaded and whether exposure to the elements weakened it.

Darrick Hom, an Oakland-based structural engineer and president of the Structural Engineers Association of Northern California, said the broken wooden beams were “coming off in chunks” in the hands of investigating engineers Tuesday. He said it was surprising to see such deterioration in a building just 8 years old.

Normally, any building material — wood, steel or concrete — that will be exposed to the elements requires weatherproofing at the time of construction, Hom said. Investigators will probably look at how that weatherproofing was carried out at Library Gardens, he said.

Nothing in the state code requires follow-up inspections of balconies after a building receives a certificate of occupancy, unless there is major remodeling, said Brian Ferguson, deputy director of the state Department of General Services.

Berkeley officials said the building code at the time of the apartment house’s construction in 2007 required the balcony to hold at least 60 pounds per square foot. That requirement has since been raised to 100 pounds.

City spokesman Matthai Chakko said officials have not measured the balcony and how much weight it was built to bear. Chakko also said there is no city requirement to post a weight restriction for apartment balconies.

Grace Kang, a structural engineer and spokeswoman for Pacific Earthquake Engineering Research Center at Berkeley, raised the possibility the balcony was overloaded.

She said it looked to her to be 4 by 6 feet, or 24 square feet. That would mean it should have been able to bear at least 1,440 pounds. Thirteen normal-size adults would weigh more than that.

“They were packed like sardines, and then they were moving,” which can increase the strain, she said.