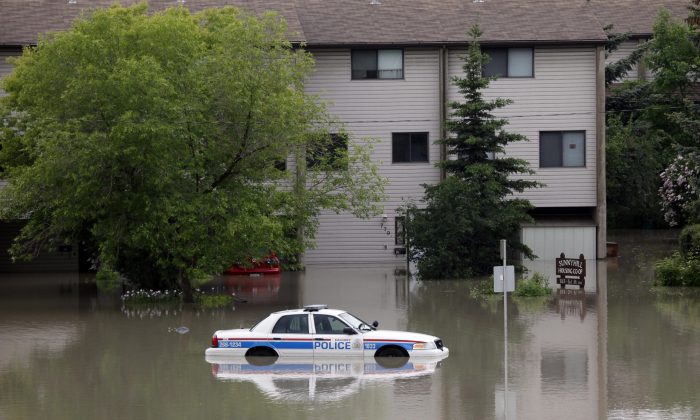 Authorities Tell Calgary Residents to Stay Inside, Wait Out Flooding

For those Calgary residents that haven’t evacuated their homes because of widespread flooding in and near the city, they should wait out the flooding by staying inside, local authorities said on Friday.

“If you don’t have a good reason to leave home, we’d really like you to stay there,” Bruce Burrell, director of Calgary Emergency Management Agency. “The water is flowing extremely fast and is dangerous.”

Rick Hanson, the chief of the Calgary police, said that residents should stay informed through the city of Calgary website, and the police department’s Twitter feed.

The flooding, which started around midday on June 20, has forced at least 75,000 people to evacuate their homes. The city has around one million residents.

Calgary Mayor Naheed Nenshi said water in the Elbow River, which flows below the Glenmore dam, was flowing on Friday morning at a rate of about 650 cubic meters per second.

“That’s is a very large number,” he said. “To put it in context, the maximum number that we could output from the Glenmore dam when we have the gates wide open is 170 cubic meters per second.”

Residents shouldn’t worry about water being shut off, as the water quality hasn’t been compromised at all.

Alberta Premier Alison Redford, who will be touring the flooded areas this afternoon with Canada Prime Minister Stephen Harper, said that city residents “as a community need to pull together” and help out those who are experiencing the worst effects from the flood.

Redford called it an “absolute tragic situation” but said first responders and residents have shown resiliency throughout the flooding.