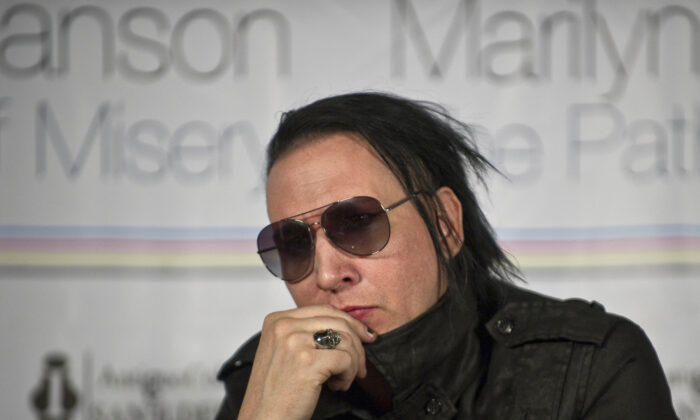 Sheriff’s investigators entered the residence early Monday morning and seized media storage units including hard drives, though Manson, whose real name is Brian Warner, was not at home at the time of the search, TMZ reported.

Deputy Eva Jimenez of the Sheriff’s Information Bureau confirmed to City News Service that the warrant was served at the West Hollywood apartment, though no further details were immediately available.

Warner was sued in April by “Game of Thrones” actress Esme Bianco for alleged sexual assault and sexual battery in what she described as a series of violent encounters.

The lawsuit, filed in federal court, alleged that Warner had used “fraudulent offers of movie and music video roles to convince Ms. Bianco to travel to Los Angeles, whereupon Mr. Warner then made threats of force and performed violent sexual acts on Ms. Bianco to which she did not consent.”

According to the lawsuit, Bianco, 38, was invited to Los Angeles from the United Kingdom by Warner with the promise of work, and after moving into the Goth rocker’s West Hollywood apartment in 2011, she was not allowed to eat, sleep, or leave without his permission.

“These claims are provably false,” King said in a statement provided to City News Service. “To be clear, this suit was only filed after my client refused to be shaken down by Ms. Bianco and her lawyer and give in to their outrageous financial demands based on conduct that simply never occurred. We will vigorously contest these allegations in court and are confident that we will prevail.”

In February, actress Evan Rachel Wood accused Warner of sexual and physical abuse during their relationship, which lasted from January 2007 until August 2010. His record label, Loma Vista Recordings, dropped him following Wood’s accusation.

After Wood’s accusations, the sheriff’s department confirmed that its Special Victims Bureau was investigating the 52-year-old Warner for alleged domestic violence.