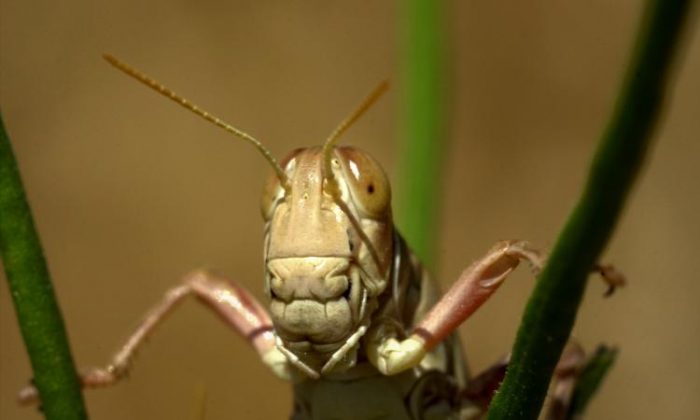 File photo of a grasshopper. (David McNew/Getty Images)
US News

Las Vegas authorities said the droves of grasshoppers sweeping through the area, causing alarm among some tourists and locals, are actually “mostly harmless.”

“It was crazy. We didn’t even want to walk through there. Everybody was going crazy,” Diana Rodriquez told CBS affiliate KLAS. “We were wondering like what’s going on.”

Videos have been shared on social media showing thousands of grasshoppers descending on the Las Vegas area.

NOPE! THIS. IS. TOO. MUCH. Check out this video of the grasshopper infestation Thursday night on the Las Vegas Strip 😱 😱😱
READ MORE→https://t.co/Bb7biU8ljk
(📸: @365inVegas) pic.twitter.com/6gklAdfIZR

The phenomenon has earned the hashtag #GrasshopperInvasion.

“What happens in Vegas, definitely can stay in Vegas!” wrote meteorologist Steve Glazier in a tweet.

What happens in Vegas, definitely can stay in Vegas! #GrasshopperInvasion pic.twitter.com/rH144Izbig

Lyft driver Jessica Palmore told CNN that driving around the Strip amidst the infestation was surreal.

“When I see them, it’s like being in a movie,” Palmore said. “Never seen nothing like this ever!”

The channel Life With Weather shared a video of a beam of light shooting up from the top of the Luxor casino pyramid, showing the sky teeming with insects.

“I know they are harmless, but they make me super itchy seeing them,” Palmore was cited as saying.

Someone posted a video showing what appears to be a construction worker getting swarmed by grasshoppers.

But Las Vegas city authorities said in a news release that the wave of adult pallid-winged grasshoppers traveling north to central Nevada is nothing to worry about.

🦗#GrasshopperInvasion: here’s when we can expect these (mostly harmless) critters to leave the valley 🦗 https://t.co/q67CUXH9VE pic.twitter.com/9BNUmQYvT4

“They don’t carry diseases or bite and probably won’t even cause any damage in your yards,” said Nevada state entomologist Jeff Knight. “They do not eat wood.”

He urged patience, as the critters will soon be gone.

“There is really no point in spraying your house because they won’t be around long enough,” Knight said. “They may lay 50-100 eggs that could hatch in the fall but they most likely won’t hatch because conditions are not right. They generally just eat weeds.”

Knight said the grasshoppers are drawn to ultraviolet light sources and so switching to different lights would encourage them to leave.

“They attracted to the ultraviolet lights so you can consider changing the lights outside of your house and garage. If you go to a low UV or amber light, they will move on. You’ll see the most under bright white lights at night.”

He said there have been several similar migrations in the past 30 years, including one about six or seven years ago, adding that they’re typically linked to unusual weather patterns.

“It appears through history that when we have a wet winter or spring, these things build up often down below Laughlin and even into Arizona,” Knight told CNN. “We’ll have flights about this time of the year, migrations, and they’ll move northward.”

This year, the Las Vegas area recorded more rain in six months than it typically gets in a whole year, CBS reported.

The National Oceanic and Atmospheric Administration (NOAA) said that Nevada normally has the least amount of rain in the country.