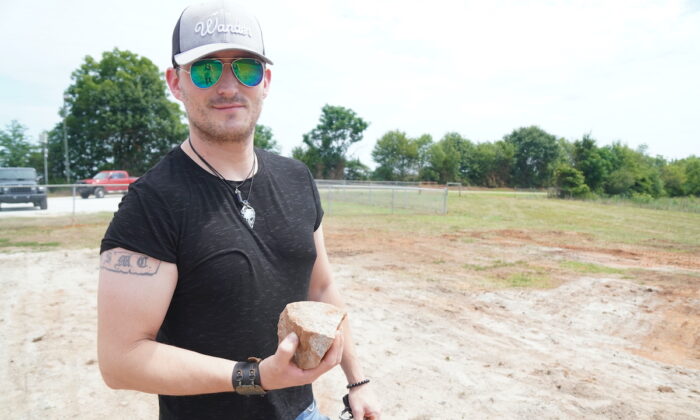 Eric holds a small chunk of rock left over from the destruction of the Georgia Guidestones in Elberton, Georgia on July 8, 2022. (Jackson Elliott/The Epoch Times)
By Jackson Elliott

ELBERTON, Ga.—After the destruction of the Georgia Guidestones early Wednesday, authorities eagerly searched for a time capsule buried nearby—but they found nothing.

According to police Lieutenant Shane Allen, the local government dug beneath a plaque by the monument that promised a time capsule six feet beneath it.

“There was no hole. There was no nothing. It was a slab of concrete on top of dirt,” he said.

The Guidestones monument, built at a high cost by an anonymous man, has many mysteries. The plaque announcing the time capsule was one of them.

“Sponsors: A small group of Americans who seek the Age of Reason,” it reads. “Time Capsule placed six feet below this spot on to be opened on.”

The space after each “on” is blank.

Other inscriptions in several languages on the stones offer ten rules for humanity to follow.

Allen, the officer responsible for securing the scene, said that although authorities dug six feet into Georgia soil, they found nothing.

He added that the time capsule’s recent removal would have left obvious signs.

“You can tell it was undisturbed,” he said.

However, people have tried to dig under the Guidestones in the past, he said.

“We had one guy that dug a good ways underneath it,” he said. “It just got buried back up.”

Allen said that the Guidestones are a lightning rod for conspiracy theories.

When a chip broke off the capstone’s corner, a pair of newlyweds made a granite block with the date of their wedding and attached it in the empty space, he said.

In a little while, conspiracy theorists began creating bizarre theories about the meaning of the date, Allen said. No matter what happens with the Guidestones, someone will find a conspiratorial explanation.

“There’s more conspiracy around it than there is actual truth,” he said. “And that’s the problem.”

Fans of the Guidestones sometimes jokingly add to the conspiratorial chaos.

Ernie Bryson, a Danielsville resident and appreciator of the Guidestones, said he once faked a ritual at the Guidestones as a joke. He held hands with a few other visitors. He invited the next people to arrive into the circle.

“We were just short a person,” he recalled telling them.

Bryson took the 40-minute drive to the Guidestones to look at the few rock chips that marked the monument’s location. He found one small piece with letters inscribed on it.

Pranksters online claimed that police found a time capsule filled with a few 1980s memorabilia and a lot of drugs.

It’s unclear what happened to the larger rock fragments from the Guidestones after the government removed them from the site.

Elbert County government leaders and the police told The Epoch Times that they didn’t have answers.

Losing the Guidestones might deprive Elberton of about 20,000 tourism visitors per year, according to local leaders.

“We’ve got an empty field around the house. We could have just done that,” Bryson said of the post-destruction Guidestones.

Another visitor expected an onrush of conspiracy theorists.

“There are gonna be people making the trek over here,” said Eric, an Athens, Georgia resident. “They were already mysterious.”

Before the explosion, video caught someone running from the Guidestones after leaving a package.

An anonymous employee at a local granite company said that it’s challenging to know how the Guidestones were destroyed.

The granite Guidestones were hard enough that their destruction would likely require powerful explosives, he said. But in most situations, modern quarries rely on high-pressure water to cut stone, not dynamite.