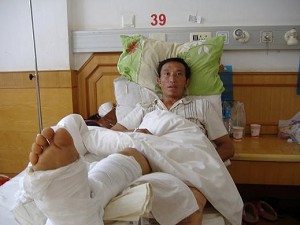 Without warning, local authorities dispatched hundreds to demolish villagers' homes in Wenshan County, Yunnan Province on October 27. Police beat villagers who resisted. More than ten villagers were injured and admitted to the hospital, while approximately 20 were held in a detention center.

Most of the injured are elderly people between 70 and 80 years old. Some had arms and legs broken, while others sustained broken ribs and some needed surgery. Villagers needing surgery were expected to pay in advance, otherwise no operation would ensue.

According to some eyewitness accounts, the government sent 400 to 500 people to forcibly demolish villagers' homes. It did so without legal basis, without notice, or by any agreement with the villagers.

“There were 16 families living in the village. Ten were forced to move, but the other six refused to concede. As a result, more than ten villagers from the six families were doused by fire hoses or beaten with electronic batons. All were seriously injured and sent to the hospital,” a person from a neighboring village told the Epoch Times reporter.

“Because the villagers did not agree with the land acquisition, they resisted but were charged with assaulting the police. Eighteen people were arrested and are being held in a detention center. Their specific circumstances were unknown.” said another villager surnamed Gao.

“The government officials found a developer to build commercial buildings without consulting with the villagers. The land was expropriated and financial compensation was set by the officials with no room for negotiations. Villagers cannot afford to buy the buildings that the developer will build.” Gao said.

As an aside, no government officials have gone to the hospital to visit the injured, nor have they explained their actions. The detained villagers' situation is unknown.

Locals' complained, “This is what bandits would do!”