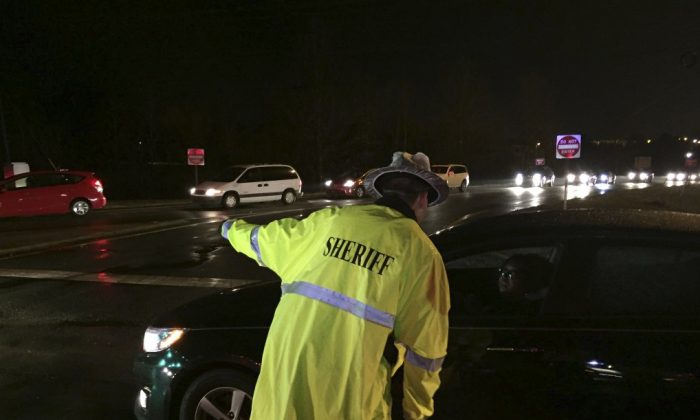 In this photo provided by ABC11, an Alamance County Sheriff Dept. officer directs traffic near exit 154 on Interstate 40 after multiple vehicle accidents Sunday, March 13, 2016, in central North Carolina. Authorities say dozens of vehicles were involved in a series of wrecks that injured over a dozen people and temporarily shut down part of Interstate 40. (Tim Pulliam/ABC11 via AP) MANDATORY CREDIT
US

Authorities: Over 130 Cars Involved in Wreck on I-40 in NC

BURLINGTON, N.C.— A huge series of wrecks involving more than 130 vehicles on Interstate 40 in North Carolina are being blamed on speeding, following too closely and driver inattention in heavy rain and fog, authorities say.

No one was killed but 25 people were hurt in the pileups that began late Sunday afternoon on the route between Durham and Greensboro, said a statement released Monday by the Department of Public Safety.

As crews worked to clear those accidents, motorists in the westbound lanes slowed to look at the scene and were involved in a series of additional wrecks. All told, 134 vehicles were eventually involved.

Investigators said high speed, following too closely and a failure by drivers to pay attention to the road conditions were responsible, the statement said.

The six-mile stretch of interstate between Mebane and Graham was reopened about 11 p.m. Sunday, hours after the first accidents.