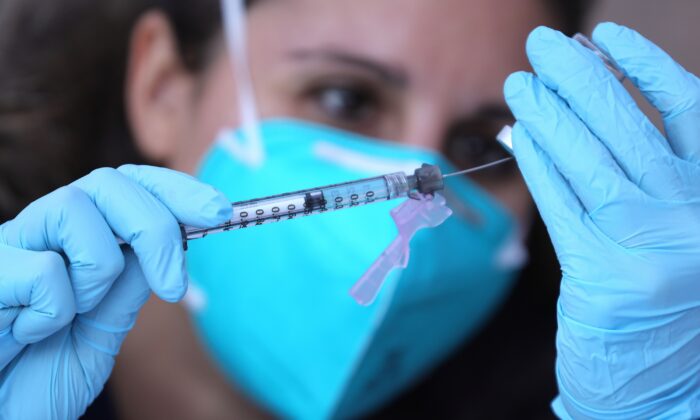 Federal officials are investigating after some COVID-19 vaccine recipients have developed the rare blood disorder thrombocytopenia, with at least several cases resulting in death.

The Food and Drug Administration (FDA) is investigating and assessing the reported cases, an agency spokesperson told The Epoch Times via email.

“At this time, we have not found a causal relationship,” the spokesperson said. “We will update the public as we learn more about these events.”

The blood disorder was listed by the FDA last year as a possible adverse event outcome from getting a COVID-19 vaccine, alongside other serious adverse events such as Guillain-Barré syndrome and death.

Several dozen case reports of post-vaccination thrombocytopenia have been submitted to the Vaccine Adverse Event Reporting System (VAERS), a passive reporting system managed by the FDA and the Centers for Disease Control and Prevention. Approximately 44.7 million doses of COVID-19 vaccines have been administered in the United States as of Feb. 10.

In one case, a 56-year-old male in Florida, who was injected with Pfizer’s vaccine, was rushed to the hospital several days later, after noticing “small blood tinged spots.” He was diagnosed with thrombocytopenia.

A 36-year-old Pennsylvania woman said she woke up in early January, about two weeks after getting Pfizer’s vaccine, with blood blisters all over her mouth and went to the emergency room. She was admitted and diagnosed with idiopathic thrombocytopenic purpura (ITP), a version of the disorder.

The most high-profile instance involved Dr. Gregory Michael, a 56-year-old Miami doctor who died 16 days after receiving a vaccination against the CCP (Chinese Communist Party) virus, which causes COVID-19.

Michael’s wife, Heidi Neckelmann, wrote on Facebook that the doctor was admitted to the emergency room, where medical workers found his platelet count to be zero. Thrombocytopenia causes a low platelet level and, in adults, typically requires medical treatment.

Michael was taken to an intensive care unit, where he was diagnosed with acute ITP, caused by a reaction to the vaccine, his wife said.

“No one has contacted me from Pfizer or any health agency. All I know about the investigation is what is posted in the different news articles, which is that it is under investigation,” she told The Epoch Times in a Facebook message.

Dr. Jerry Spivak, professor of medicine in the Hematology division at the Johns Hopkins University School of Medicine in Maryland, didn’t evaluate Michael and doesn’t have knowledge of his treatment.

“However, based on the rapid onset, severity, and the similar time course of thrombocytopenia in several other patients within the same time period, exposed to the same vaccine and all being men, which is unusual for immune thrombocytopenia, I think that a very strong argument can be made to the extent that, until proven otherwise, the association [with the vaccine] has to be considered real, as opposed to coincidental,” Spivak told The Epoch Times via email.

“Vaccine-induced thrombocytopenia is a recognized rare event but no one should die from it. Dismissing this event as coincidental or merely possible does an injustice to Dr. Michael, to scientific inquiry, and harm to others who may experience the same adverse event. So, yes, until proven otherwise, I consider this a COVID-19 linked event,” added the doctor, who has himself been vaccinated and advises others to get a vaccine because he believes the benefits outweigh the risks.

A Pfizer official told The Epoch Times that the preliminary investigation into post-vaccination cases of thrombocytopenia indicates there’s no connection between the vaccines and the disorder, but noted that the FDA and other federal health agencies are responsible for the investigations.

“We take reports of adverse events very seriously. We are aware of cases of thrombocytopenia in recipients of our COVID-19 vaccine as reported to the VAERS … and/or reported to Pfizer. We are collecting relevant information to share with the FDA. However, at this time, we have not been able to establish a causal association with our vaccine,” a spokesperson added via email.

“To date, millions of people have been vaccinated and we are closely monitoring all adverse events in individuals receiving our vaccine. Serious adverse events, including deaths that are unrelated to the vaccine, are unfortunately likely to occur at a similar rate as they would in the general population.”

Moderna, the only other company that has received emergency authorization for a COVID-19 vaccine in the United States, didn’t immediately respond to a request by The Epoch Times for comment.

Authorities stressed that VAERS is a passive system, meaning anyone can submit reports. However, at this stage in the vaccination process, it’s the primary public-facing system concerning adverse events following vaccination. There are plans to implement stronger systems in the coming months.