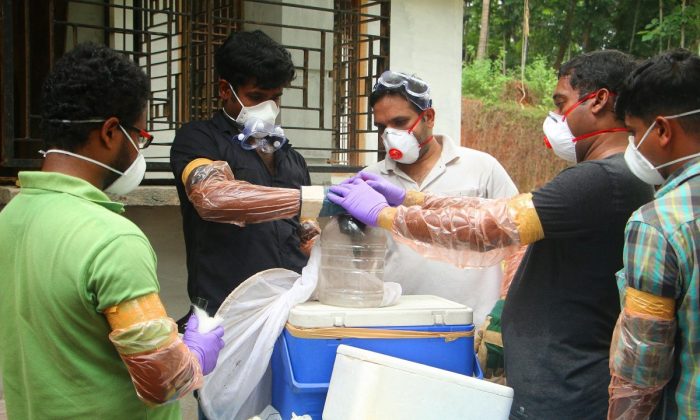 Officials deposit a bat into a container after catching it inside a well at Changaroth in Kozhikode in the Indian state of Kerala on May 21, 2018. (AFP/Getty Images)
India

Authorities in India Working to Contain Nipah Virus as Infections Rise After Death of Boy, 12

Authorities in India’s southern Kerala state are battling to contain an outbreak of the Nipah virus amid the global COVID-19 pandemic.

At least 11 people in the Indian state are believed to have contracted Nipah, a dangerous virus that is not related to COVID-19 and for which no vaccine currently exists.

According to the World Health Organization (WHO) the Nipah virus (NiV) is a zoonotic virus, meaning it is transmitted from animals to humans and can also be transmitted through contaminated food or directly between people.

In infected people, it causes a range of illnesses to acute respiratory illness and fatal encephalitis, however, carriers can also be asymptomatic. The virus can also cause severe disease in animals such as pigs, resulting in significant economic losses for farmers.

The rising infection rate comes just one day after 12-year-old Mohammed Hashim died from the Nipah virus at a private hospital in Kerala.

The boy was admitted to hospital a week ago with high fever and his blood samples were sent to the National Institute of Virology, after his condition worsened and doctors suspected inflammation of his brain, or encephalitis. The tests confirmed a Nipah infection and he died early on Sunday, CBS reported.

The state’s Health Minister Veena George said on Monday that 251 people who came into contact with the child have been identified, including 129 health care workers.

“There are 38 persons in isolation at Kozhikode Medical College and Hospital, of which 11 have shown symptoms. Samples of eight persons have been sent to Pune NIV [National Institute of Virology] for testing,” George told The Hindu.

She said of the 251 contacts, 54 are high-risk contacts, and out of those, 30 are health care workers. This includes the boys parents and a few close relatives of the child. They have all been quarantined at the government Medical College Hospital (MCH), Kozhikode.

“The boy was taken to at least four health care institutions, including the MCH, Kozhikode, before being admitted to the private hospital where he died. That is why a majority of the contacts are health care workers,” she added.

Two of them are from Malappuram and Kannur districts, where an alert was sounded on Sunday.

Authorities are working to identify the source of the outbreak, which is suspected to be contaminated fruit and some half-eaten rambutan fruits that were collected from the neighborhood of the victim’s house in Pulparamb near Koolimad, after it was discovered that he had eaten them.

Fruit bats, which are considered to be the natural carriers of the virus, are also present in the area, the boy’s parents told authorities.

Officials from the Department of Animal Husbandry also collected blood and oral samples of two goats from the home, while another habitat of bats was identified near the area.

A team from the National Institute of Virology will be collecting body fluid samples of fruit bats from the area on Wednesday.

The virus was discovered when 300 people were infected in 1999 in Singapore and Malaysia. Over 100 people died and a million pigs were killed during the attempt to control the disease, according to the Centers for Disease Control and Prevention.

Since then, there have been no other known outbreaks of the virus in Malaysia and Singapore, however outbreaks have been recorded in some parts of Asia on a yearly basis, primarily in Bangladesh and India.

An outbreak in the Kozhikode district of Kerala in May 2018 killed 17 of the 18 people who caught the virus. This followed outbreaks in 2001 and 2007, both of which were in West Bengal.