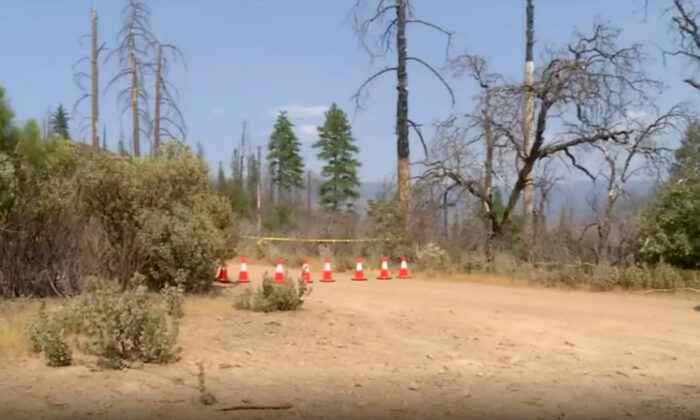 A campground is seen in the area in which a family died in Mariposa County, Calif., in August 2021. (KFSN)
Northern California

A California river where a couple and their young child died last month was shut down due to toxic algae.

An emergency closure order from the Bureau of Land Management Mother Lode Field Office closed off all lands managed by the agency along the Merced River between Briceburg and Bagby.

The reason for the closure was cited as toxic algal blooms. River access will stay blocked off until Sept. 17, though the closure could be extended if conditions change.

“These algal blooms can produce toxins that can make people and pets extremely sick. We will continue to monitor for the algae’s presence and look forward to when the public can safely recreate in the Merced River,” Elizabeth Meyer-Shields, manager of the field office, said in a statement on Sept. 3.

The section of the river sits in Merced County and is the same area where John Gerrish, Ellen Chung, their 1-year-old daughter Miju, and their dog were found dead last month.

Search teams found the family’s vehicle near the Sierra National Forest Gate and soon found their bodies in the river’s drainage.

“Current scene information does not indicate a clear picture of what occurred or a clear cause of death, the scene is currently being handled as a hazmat and coroner investigation,” the Mariposa County Sheriff’s Office said in a statement at the time of the discovery.

No update has been given since and the office did not immediately respond to a request for comment.

Briese confirmed the trail the family was hiking on was included in warnings about toxic algal blooms.

“At the beginning there are some signage about algae blooms, but that’s from the forest service, and I can’t speak to the potential dangers of that,” he said.

The U.S. Forest Service warned in July that water testing along the Merced River in the area showed a high concentration of algae bloom.

People were told not to swim or wade in the water, or allow their pets to go in.

Some of the algae blooms produce toxins that can pose a risk to humans and pets, the agency said.

The service later ordered the Merced River area in which the family was found closed, citing “unknown hazards found in and near the Savage Lundy Trail.