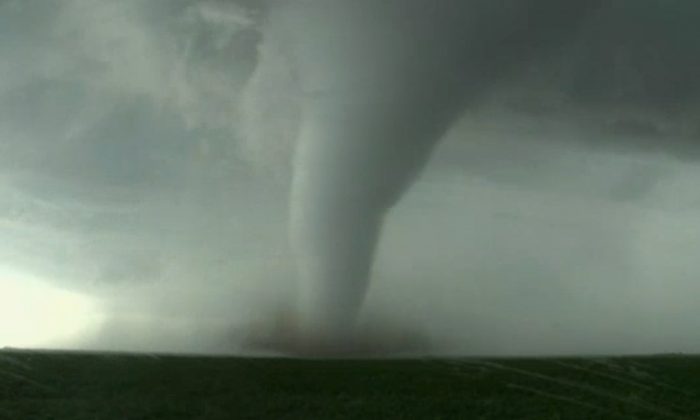 This image made from a Tuesday, May 24, 2016 video by KWTV-KOTV, shows a funnel cloud moving across the field near Dodge City in Ford County, Kan. Crews are evaluating the damage Wednesday after tornadoes destroyed several homes in western Kansas as a series of severe storms swept across the Plains. (KWTV-KOTV via AP)
US

CHAPMAN, Kan.—About 20 homes were damaged Wednesday night in a rural area of northern Kansas after a large tornado passed through but there were no immediate reports of injuries, the state Highway Patrol said.

Trooper Ben Gardner, a spokesman for the patrol, said troopers were checking a rural area in Dickinson County where it was believed 20 homes were damaged, some significantly.

Troopers were going from home to home to make sure everyone was OK and so far hadn’t found or heard of anyone who was hurt, Gardner said.

The tornado formed just after 7 p.m. near the Ottawa County community of Niles and stayed on the ground continuously for about an hour and a half, National Weather Service meteorologist Chad Omitt said. Estimates are that it was a quarter- to a half-mile wide at times, he said.

The weather service warned people to take cover as the tornado it called “catastrophic” approached Chapman, about 75 miles west of Topeka.

Omitt said “the heart” of the tornado at one point was just about a mile south of Chapman, a town of about 1,400 that was devastated by a deadly tornado in 2008.

The twister that hit June 11, 2008, tore a path of destruction six blocks wide through the town. Officials said one woman died, 100 homes were destroyed or heavily damaged, and 80 percent of the town had at least minor damage.

Most of Wednesday’s damage was in a rural area between Chapman and the town of Abilene, Gardner said.

The storms followed severe weather that swept through the Great Plains a day earlier.

Weather service meteorologist Andrew White in Dodge City, Kansas, said multiple tornadoes struck Ford and Hodgeman counties during a two-hour span Tuesday night, including an EF-2 twister that caused damage in western Ford County. Preliminary reports indicate that at least one of the tornadoes was a half-mile wide.

The tornadoes, which injured at least two people, were part of a series of storms that also pounded several states with rain and hail. One person drowned in central Oklahoma, and a 13-year-old boy was found safe in northeastern Arkansas three hours after falling into a flooded drainage pipe.

The drowning in Oklahoma happened early Wednesday when a vehicle was swept into a drainage culvert near the small town of Davenport, about 50 miles northeast of Oklahoma City, the Highway Patrol said. The National Weather Service said 3 to 6 inches of rain fell in parts of Oklahoma.

In Arkansas, the boy who fell into a storm drain wasn’t seriously hurt. Police Cpl. Jason Chester told television station KAIT that the boy said he clung to a pole. He was rescued after two officers heard his cries for help.