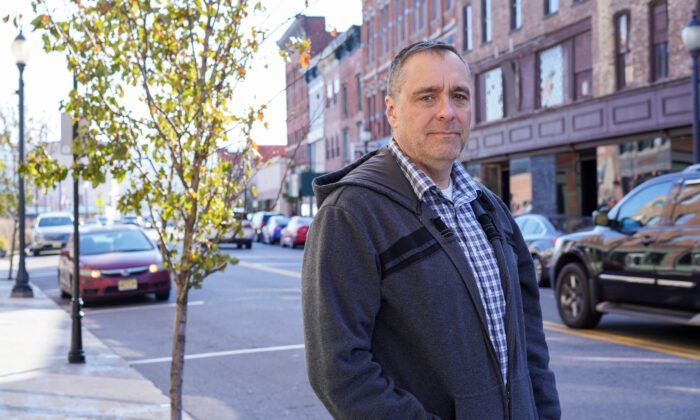 It is the only lynching in New York state since the Civil War, a story that Michael Worden grew up hearing about from his grandma.

It happened 130 years ago on the streets of his hometown, Port Jervis, a then-bustling industrial city in the North.

An African American man named Robert Lewis was accused of sexual assault against a white woman, severely beaten, and hanged twice on a tree by a mob.

Lewis was never tried, nor convicted, of the alleged crime.

Worden calls it one of the most shameful events of the city, and through four years of research, he developed the most thorough account of the lynching to date—a journey that took him to the courthouse, graveyard, and the minds of people at the time.

“We are so conditioned today to take our more progressive thoughts and beliefs and apply them to what happened 130 years ago and hold them to the same level of accountability,” Worden told The Epoch Times.

“But in this research, I tried not to judge the actions of a few through the lens of today.”

As a former detective and now town justice, Worden has spent more than 20 years delivering justice in the court system. He hopes to do the same for Lewis.

“There is no way to get him justice in the eyes of the law—we can’t arrest the people that killed him or convict them,” Worden said, “But we can put the truth out. I think to some extent, the community finally acknowledging it is a form of justice that he was denied.”

His book “Lynched by a Mob” opens with a chapter about the complex racial attitudes of the day. In the 1890s, the schools in Port Jervis were not segregated; one African American graduate, Eugene West, went on to become a doctor and was adored by the local press.

“I was trying to put readers in the framework of the community in the 1890s in terms of how the African American population fit in,” Worden said. “There was a divisive difference between economic statuses—that was partly the basis of the attitudes. It was not a cut-and-dry issue.”

Heroes of the Night

Lewis, who had gone to prison for burglary and worked as a coachman and bus driver in the city, obviously belonged to the relatively lower economic ladder.

Immediately following the sexual assault against Lena McMahon on June 2, 1892, 400 angry residents gathered around Lewis in front of the village jail. Many cried out, “Lynching him!”

A few citizens and police officers, including Officer Simon Yaple, attempted to calm the crowd and get Lewis into a lockup but failed.

One of the most difficult parts of the event for Worden to take in was how the mob got Lewis from in front of the jail to the tree.

“His hands are tied behind his back. He was dragged either by the rope around his neck or by people grabbing him. He was kicked and punched the whole time, unable to defend himself,” Worden said.

As Lewis was hanged, Judge William Crane broke into the crowd and managed to loosen the rope. Lewis fell into a gutter, still alive.

Crane stood over Lewis so the mob couldn’t get near and asked Yaple to draw his revolver to protect Lewis.

But they were too few to stop the mob. Lewis was hanged the second time and died.

“They were the few men that risked their lives to try to stop this whole event. They were the heroes of the night,” Worden said. “They were unsuccessful, unfortunately.”

“You can condemn his action, but you can’t justify what they did to him,” Worden said.

“Even if he were convicted of the rape, he would have gone to prison; it wasn’t even a death penalty case—even on a murder case, they would have just hanged somebody and would not have tortured him first.”

After months of digging at the county clerk’s office, Worden couldn’t find any minutes of the following coroner inquiry, a quasi-legal proceeding at the time where a panel of 10 jurors decided the cause of and the persons responsible for Lewis’s death.

He resorted to local newspaper archives as a primary source and used his skills as a detective to reconstruct the inquiry.

The following grand jury proceedings led to five indictments, which failed to move to trials.

Meanwhile, the angry mob that killed Lewis went about their lives.

“They were people in church on Sundays who had families, who ran businesses, who feared God, who were pillars of the community, and who were caught up in this horrible moment,” he said.

“I could put myself in that mindset completely for a moment and just read their thoughts. Some probably divorced themselves from the responsibility and rationalized it—‘I didn’t really kill him, I just held the rope,’ or ‘I might have yelled a few things, but I didn’t really mean for them to kill him.’”

“It has been a stain on the community since that night. That’s why they were trying to forget,” he added.

He even attempted to locate Lewis’s grave in the Laurel Grove Cemetery multiple times and suffered a severe bout of poison ivy following one trip.

The most exciting discovery was the autograph of Lewis on his mother’s widow’s pension application, which he was able to obtain a digital scan from the National Archives, he said.

“I stared at it for like 20 minutes,” Worden said. “I learned so much about him, I’d written about him, and this is his autograph.”

His extensive research helped identify the location of the tree from which Lewis was hanged. In June, a street marker remembering the crime was erected in that location by Friends of Robert Lewis and Minisink Valley Historical Society.

“Our objective was to honor the memory of Robert Lewis,” Minisink Valley Historical Society executive director Nancy Conod told The Epoch Times. “This is an unsolved murder—no one was held accountable for Robert Lewis’s death.”

Worden dedicated the book to his grandmother Marjorie Worden, who inspired him to write it but didn’t live to see it published.