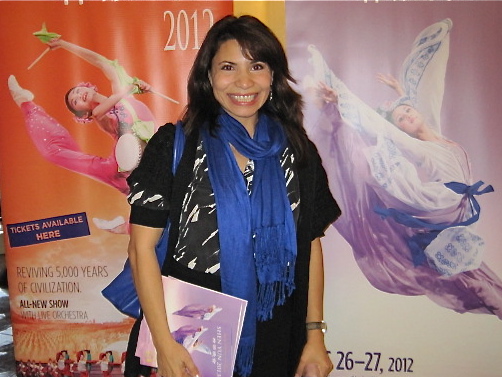 ESCONDIDO, Calif.—What impressed author and playwright Laura De Anda most about Shen Yun Performing Arts was the “compassion, love, and kindness. I see it in the different performances, but I can see it in the dancers’ faces, too.”

She was one of the cultural enthusiasts at the California Center for the Arts, Escondido on Dec. 29 enjoying the show.

New York-based Shen Yun is a classical Chinese dance and music company that tours the world each year with a new lineup of dances, songs, and musical scores. One of the distinct features of Chinese dance is its expressive power because of its emphasis on the bearing, or inner feelings of the dancer, whereby the outer form of the dancer reflects the mental state and even his or her value system.

Ms. De Anda, who is the recipient of Imagen Foundation’s Best Live Theatrical Production and co-author of “8 Ways to Say I Love My Life,” was highly impressed with the beauty of Shen Yun.

She described what she saw: “Vivid colors, beautiful images, beautiful music and oh, my gosh, the costumes are gorgeous. It’s a feast for the eyes and ears, and for the mind as well.”

Shen Yun’s website tells more about its costumes: “Shen Yun’s costume artists collect countless designs of traditional attire, ranging from those of emperors, ministers, and generals to the everyday clothing of the common people. They use bright colors to tailor and recreate hundreds of new pieces each season.”

Shen Yun’s mission is to restore China’s 5,000 years of lost culture through the performing arts.

The message Ms. De Anda took from the evening’s performance was “global.” “Yesterday I saw Life of Pi, which is set in India, and so today it’s Shen Yun, which is China. So for me it’s the appreciation for all cultures of the world.”

“What I bring with me from the show is just beautiful fascination for life, again, and the appreciation for world cultures,” said Ms. De Anda.

“Shen Yun has probably the best marketing department in the world! Seriously, it’s covered—billboards, newspapers, posters—that’s why I found out about Shen Yun. So my hat goes off to the publicity department for Shen Yun. It’s amazing.”

“Absolutely,” said Ms. De Anda when asked if she would recommend Shen Yun.

Mr. James Girsch, a voiceover artist, attended the performance with his friend, Shirley.

Both were impressed after seeing Shen Yun.

Shirley agreed and said, “It’s really spectacular. It’s perfect. I’m so amazed by the choreography, the costumes, the color, the music—everything is perfect. I want to see it again. I would recommend it. I’m going to highly recommend it to people, to my family and friends to watch it.”