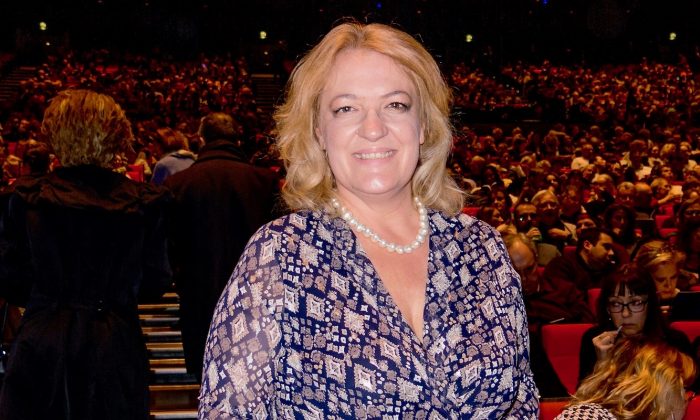 PARIS—Author Mimoza Kuchly is working on a book about a French woman who loves Chinese culture. Seeing Shen Yun Performing Arts’s revival of 5,000 years of Chinese civilization on stage, in Paris at the Palais des Congrès, was a fountain of inspiration for the artist Kuchly.

“It’s something wonderful,” said Kuchly on Jan. 18 after seeing the classical Chinese dance and music performance. Seeing the history and the rich culture—a great mixture of many more ethnic groups, throughout the dynasties—Kuchly felt big emotions well up.

“I am of Albanian origin, and there was a time when Albania and China were great friends,” Kuchly explained. “And I remember those rhythms, the music we heard in our time, we grew up with that, and I found it too, even if it was a little bit, the part of communism, the part of the system we experienced in both countries, and it really touched me and I was impressed twice more because of that.”

Albania is a country in the southeast of Europe, and invaded multiple times in modern history. It became a communist state after World War II, until 1991 when the regime was dissolved and it went through a subsequent transition phase.

Communists came into power in China in 1949, putting an end to the long, unbroken millennia of divinely inspired traditional culture.

The China Kuchly was familiar with was one she could see on television or in films, and mostly from the ’60s onwards. After seeing New York-based Shen Yun’s performance, she was brimming with details about the Mongolian way of life, Chinese stories and poetry, beautiful lakes, and most importantly, the people.

“[It] gives the impression that we lived through that time. It transmits this emotion,” Kuchly said. “Five thousand years of Chinese culture, that really feels like it here. In two hours of shows, you can really feel it.”

Kuchly felt that the artists took pride in this traditional culture and through that they were transmitting their traditions and values, to bring “epic characters in history” to life, and the audience could receive it.

“We must thank them for introducing us, for bringing this culture back to us here and for us getting to know them,” she said.

“We were dazzled—I was dazzled,” she said.

Kuchly added that the music played a big role in bringing it all together. Shen Yun’s orchestra is unique in that it mixes Chinese instruments into a Western symphony and the original compositions have a distinct Chinese sound while remaining harmonious with the Western arrangements, and Kuchly felt that music transported the audience to China, even thousands of years back.

“It’s not something you find every day, frankly,” she said. “Right now I feel like I’ve been in old China and in the traditions, which are traditions that purify the mind.”

Traditional Chinese culture is built on values stemming from religions of Buddhism, Taoism, and Confucianism. These are principles like benevolence and justice, wisdom and propriety, and respect for the divine. For thousands of years people believed that good begets good and evil begets evil, and central to civilization was the belief in harmony between man, heaven, and earth.

Kuchly saw value in these ideas even for the modern age.

“We need that today, it’s missing, and the show transmitted that easily,” Kuchly said. “Maybe we are thirsty for it.”

“I think that the world lacks this spirituality, because peace begins from the inside of the human heart,” Kuchly said. She found this peace in the traditional Chinese culture she saw on stage, and explained that it wasn’t just the visuals or the music, but all together in the culture, and in the stories told through classical Chinese dance.

“It starts from the divine, and it ends there,” she said. “So we need this peace from within, this divinity that everyone comes into the world with something … with this spirit.”

“I have the impression that they are always there, they have something divine in their minds, in their hearts, in their heads,” she said. “So I love it, I admire it!”

With reporting by NTD Television, Guan Ning, and Catherine Yang.